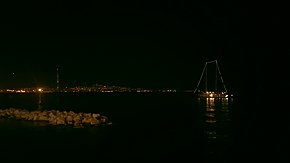 View across a dock in the Gulf of Naples at night

Night or nighttime (also spelled night-time or night time) is the period of ambient darkness from sunset to sunrise during each 24-hour day,[1] when the Sun is below the horizon. The exact time when night begins and ends (equally true with evening) depends on the location and varies throughout the year.[2] When night is considered as a period that which follows evening, it is usually considered to start around 8 pm and to last to about 4 am.[3] Night ends with coming of morning at sunrise.[4]

The word can be used in a different sense as the time between bedtime and morning.[5] In common communication, the word night is used as a farewell ("good night") and sometimes shortened to "night", mainly when someone is going to sleep or leaving.[6] For example: "It was nice to see you. Good night!"[citation needed] Unlike "good morning", "good afternoon", and "good evening", "good night" (or "goodnight") is not used as a greeting.

The opposite of night is day (or "daytime", to distinguish it from "day" referring to a 24-hour period). The start and end points of time for a night vary, based on factors such as season and latitude. Twilight is the period of night after sunset or before sunrise when the Sun still illuminates the sky when it is below the horizon. At any given time, one side of Earth is bathed in sunlight (the daytime) while the other side is in the shadow caused by Earth blocking the sunlight. The central part of the shadow is called the umbra.

Natural illumination at night is still provided by a combination of moonlight, planetary light, starlight, zodiacal light, gegenschein, and airglow. In some circumstances, aurorae, lightning, and bioluminescence can provide some illumination. The glow provided by artificial lighting is sometimes referred to as light pollution because it can interfere with observational astronomy and ecosystems.

The drainage basin of the Nile river and delta at night

On Earth, an average night lasts shorter than daytime due to two factors. Firstly, the Sun's apparent disk is not a point, but has an angular diameter of about 32 arcminutes (32'). Secondly, the atmosphere refracts sunlight so that some of it reaches the ground when the Sun is below the horizon by about 34'. The combination of these two factors means that light reaches the ground when the center of the solar disk is below the horizon by about 50'. Without these effects, daytime and night would be the same length on both equinoxes, the moments when the Sun appears to contact the celestial equator. On the equinoxes, daytime actually lasts almost 14 minutes longer than night does at the Equator, and even longer towards the poles.

The summer and winter solstices mark the shortest and longest nights, respectively. The closer a location is to either the North Pole or the South Pole, the wider the range of variation in the night's duration. Although daytime and night nearly equalize in length on the equinoxes, the ratio of night to day changes more rapidly at high latitudes than at low latitudes before and after an equinox. In the Northern Hemisphere, Denmark experiences shorter nights in June than India. In the Southern Hemisphere, Antarctica sees longer nights in June than Chile. Both hemispheres experience the same patterns of night length at the same latitudes, but the cycles are 6 months apart so that one hemisphere experiences long nights (winter) while the other is experiencing short nights (summer).

On other celestial bodies

Nótt, the personification of night in Norse mythology, rides her horse in this 19th-century painting by Peter Nicolai Arbo.

The phenomenon of day and night is due to the rotation of a celestial body about its axis, creating an illusion of the sun rising and setting. Different bodies spin at very different rates, however. Some may spin much faster than Earth, while others spin extremely slowly, leading to very long days and nights. The planet Venus rotates once every 224.7 days – by far the slowest rotation period of any of the major planets. In contrast, the gas giant Jupiter's sidereal day is only 9 hours and 56 minutes.[7] However, it is not just the sidereal rotation period which determines the length of a planet's day-night cycle but the length of its orbital period as well - Venus has a rotation period of 224.7 days, but a day-night cycle just 116.75 days long due to its retrograde rotation and orbital motion around the Sun. Mercury has the longest day-night cycle as a result of its 3:2 resonance between its orbital period and rotation period - this resonance gives it a day-night cycle that is 176 days long. A planet may experience large temperature variations between day and night, such as Mercury, the planet closest to the sun. This is one consideration in terms of planetary habitability or the possibility of extraterrestrial life.

The disappearance of sunlight, the primary energy source for life on Earth, has dramatic effects on the morphology, physiology and behavior of almost every organism. Some animals sleep during the night, while other nocturnal animals including moths and crickets are active during this time. The effects of day and night are not seen in the animal kingdom alone; plants have also evolved adaptations to cope best with the lack of sunlight during this time. For example, crassulacean acid metabolism is a unique type of carbon fixation which allows photosynthetic plants to store carbon dioxide in their tissues as organic acids during the night, which can then be used during the day to synthesize carbohydrates. This allows them to keep their stomata closed during the daytime, preventing transpiration of precious water.

As artificial lighting has improved, especially after the Industrial Revolution, night time activity has increased and become a significant part of the economy in most places. Many establishments, such as nightclubs, bars, convenience stores, fast-food restaurants, gas stations, distribution facilities, and police stations now operate 24 hours a day or stay open as late as 1 or 2 a.m. Even without artificial light, moonlight sometimes makes it possible to travel or work outdoors at night.

Night is often associated with danger and evil, because of the psychological connection of night's all-encompassing darkness to the fear of the unknown and darkness's obstruction of a major sensory system (the sense of sight). Nighttime is naturally associated with vulnerability and danger for human physical survival. Criminals, animals, and other potential dangers can be concealed by darkness. Midnight has a particular importance in human imagination and culture.

The belief in magic often includes the idea that magic and magicians are more powerful at night. Séances of spiritualism are usually conducted closer to midnight. Similarly, mythical and folkloric creatures as vampires and werewolves are described as being more active at night. Ghosts are believed to wander around almost exclusively during night-time. In almost all cultures, there exist stories and legends warning of the dangers of night-time. In fact, the Saxons called the darkness of night the 'death mist'.[citation needed]

In literature, night and the lack of light are often color-associated with blackness which is historically symbolic in many cultures for villainy, non-existence, or a lack of knowledge (with the knowledge usually symbolized by light or illumination).

The cultural significance of the night in Islam differs from that in Western culture. The Quran was revealed during the Night of Power, the most significant night according to Islam. Muhammad made his famous journey from Mecca to Jerusalem and then to heaven in the night. Another prophet, Abraham came to a realization of the supreme being in charge of the universe at night.

Listen to this article

This audio file was created from a revision of this article dated 2006-12-10, and does not reflect subsequent edits.
()