Kirundi,[5][6] also known as Rundi,[2][7][8][9] is a Bantu language spoken by 9 million people in Burundi and adjacent parts of Tanzania and the Democratic Republic of the Congo, as well as in Uganda. It is the official language of Burundi. Kirundi is mutually intelligible with Kinyarwanda, an official language of Rwanda, and the two form part of the wider dialect continuum known as Rwanda-Rundi.[10]

Kirundi is natively spoken by the Hutu, including Bakiga and other related ethnicities, as well as Tutsi, Twa and Hima among others have adopted the language. Neighbouring dialects of Kirundi are mutually intelligible with Ha, a language spoken in western Tanzania.

Kirundi is one of the languages where Meeussen's rule, a rule describing a certain pattern of tonal change in Bantu languages, is active. 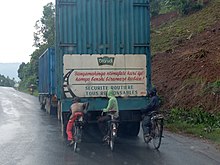 The Kirundi text on the back of the truck warns cyclists not to hold on to it.

Although the literature on Rundi agrees on 5 vowels, the number of consonants can vary anywhere from 19 to 26 consonants.[11] The table below is compiled from a survey of academic acceptance of Rundi consonants.[12]

The table below gives the vowel sounds of Rundi.

All five vowels occur in long and short forms. The distinction is phonemic.[13]

Rundi is often used in phonology to illustrate examples of Meeussen's rule[15][16] In addition, it has been proposed that tones can shift by a metrical or rhythmic structure. Some authors have expanded these more complex features of the tonal system noting that such properties are highly unusual for a tone system.[17]

Syllable structure in Rundi is considered to be CV, that is having no clusters, no coda consonants, and no complex vowel nuclei. It has been proposed that sequences that are CVV in the surface realization are actually CV in the underlying deep structure, with the consonant coalescing with the first vowel.[18]

Rundi has been shown to have properties of consonant harmony particularly when it comes to sibilants. Meeussen described this harmony in his essay and it is investigated further by others.[19] One example of this harmony is triggered by /ʃ/ and /ʒ/ and targets the set of /s/ and /z/ in preceding adjacent stem syllables.