Kirby Bellars Priory was a small priory of Canons Regular of Saint Augustine in Leicestershire, England. It is now the Church of England Parish Church of Saint Peter's serving the village of Kirby Bellars.

Some of the present parish church of Saint Peter's had been constructed during the 1200s for the villiage at that time called Chirchebi.[1] In 1316 Roger de Beler granted lands to support a pair of chaplains to say daily Requiem Masses in a private chantry chapel, also dedicated to Saint Peter, at Kirby Bellars Mannor House for the souls of himself, his wife Alice, his parents William and Amicia, and all his ancestors. One of the chaplains was also responsible for saying Mass in a second chantry and Lady Chapel located in the north and south aisles of the Parish Church. In 1319 the establishment was expanded to a college of secular canons comprising a warden and twelve chaplains, and Beler added the holding of Buckminster Mannor as well as lands in to the north and south of Kirby parish church and other places for the upkeep of the community.[2] The Chantry Chaplains were also responsible for offering Masses in the Parish Church Saint Peter's which was subordinated to their control on the 2nd September 1319.[3] Given the size of St Peters and the evidence of large scale buildings adjacent Northern field it is likely that after 1359 it became the Priory church too although there is some dispute about this.[4] After Rogers Murder by his cousin in 1326 the college experienced a time of disruption and instability among the chaplains.[5]

Wardens of the College[6]

In 1359 the college of secular clergy was transformed into a priory of Augustinian Canons, with a prior and twelve canons. The reformed community, inspired by 6th century Rule of Saint Augustine, were obliged by their new vows to remain stable at the priory rather than seeking positions elsewhere as before. The canons had a mixed vocation of prayer, pastoral care and work to maintain the communities building and assets. Their life revolved around the singing of the 8 daily prayer services as well as a Conventual Mass. The de Beler family continued to be the secular patrons of the community and chose to be buried in the priory church.

The Visitation Report of 1440

On the 26th of November 1440 the priory was visited by William Alnwick, Bishop of Lincoln.[8] He found the standards kept there satisfactory, correcting only minor faults of dress and some mistakes in the church services. The members of the community comprised:

The Fire and Recovery 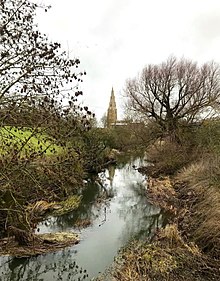 The Priory Church from the River Wreak

Sometime in the early 1500s the Priory was struck by fire which left many of its domestic buildings in ruins. In 1511 the prior and convent were authorized to give Indulgences for donations to the rebuilding fund.[9]

A visitation record from Bishop of Lincoln's Commissary from 1518 suggested many of the buildings still needed repair at that time. The same report uncovered the scandal that the sub-prior had private property, that two of the canons were suspected of immorality, and that food provided for the canons was too luxurious. Another visitation report survives from 1528 and in 1535 the priory's annual revenue was recorded as a comparatively modest £140. That assessment comes the royal visitation report issued a year before the dissolution of Kirby Bellars by which time the domestic buildings were recorded as being in good order.[10]

In 1954 there were two 14th century seals of Kirby Bellars known to have survived. Both are the common oval variety known as Vescias. The larger of the two (63/38mm), the seal of the community, shows Saint Peter, wearing a Mitre and seated on a canopied throne. The Saints right hand is raised in blessing and he holds the keys in his left. In the lower part of the seal is a shield bearing the arms of Sir Roger Beler. The inscription reads: "S' ECCLESIE BEATI P . . . KIRKEBI SUPER WRETHEK" (or "THE HOLY CHURCH OF BLESSED PETER AT KIRKBY UPON THE WREAK"). The smaller one (35/25mm), the seal of the prior, shows a standing figure holding a staff and book, with the inscription: "SIGILLUM PRIORIS DE KIRKEBI" (or "THE PRIOR OF KIRKBY")

Priors of Kirkby upon the Wreak[12]

The priory was dissolved in 1536 along with other small religious houses as part of the first wave of the dissolution of the monasteries.