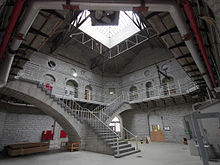 The site was chosen for "combining the advantages of perfect salubrity, ready access to the water, and abundant quantities of fine limestone."[2] Six inmates were accepted when the penitentiary was opened.[2] English author Charles Dickens visited Kingston in 1842 and commented in his American Notes, "There is an admirable jail here, well and wisely governed, and excellently regulated, in every respect. The men were employed as shoemakers, ropemakers, blacksmiths, tailors, carpenters, and stonecutters; and in building a new prison, which was pretty far advanced towards completion. The female prisoners were occupied in needlework."[3]

The penitentiary's western wall adjoins the Portsmouth Olympic Harbour, which hosted the sailing events for the 1976 Summer Olympics. Immediately across the road to the north is the now-closed Kingston Prison for Women (the property was bought by Queen's University in January 2008), which functioned from January 24, 1934 to May 8, 2000 to take female prisoners who had been housed in segregated quarters in the main facility. 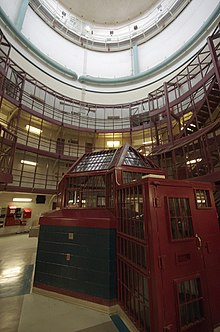 On August 14, 1954, a two-hour riot broke out in the penitentiary—the worst in its history up to that point[4]—involving 900 inmates. During the riot a breakout was attempted, but was foiled by the guards at the gate. The trouble apparently began during a morning baseball game in the exercise yard, when a guard was attacked, followed by several inmates setting fire to various buildings in the yard, including the shops and a warehouse, causing an estimated $2 million in damages. The disturbance was quelled by the guards aided by 160 Canadian Army troops and a squad of Royal Canadian Mounted Police (RCMP) officers. The 50 ringleaders were placed in solitary confinement.[4][5]

On April 14, 1971, a riot lasted four days and resulted in the death of two inmates and destruction of much of the prison. Security was substantially increased and prison reforms were instituted. Six guards were held hostage, but all were eventually released unharmed.[6] The prisoners issued formal grievances to the media including lack of recreational time, lack of work, and concerns about their future conditions in the newly built Millhaven Prison.[6] A 1971 inquiry into the riot, chaired by Justice J.W. Swackhamer, reported that they had "already noted a number of causes for Kingston's failure: the aged physical facilities, overcrowding, the shortage of professional staff, a program that had been substantially curtailed, the confinement in the institution of a number of people who did not require maximum security confinement, too much time spent in cells, a lack of adequate channels to deal with complaints and the lack of an adequate staff which resulted in the breakdowns of established procedures to deal with inmate requests. The polarization between inmates and custodial staff, between custodial staff and professional staff, led inevitably to the destruction of the program and deterioration in the life of the institution."[6] This riot, together with successors in 1975, led to an official Sub-Committee on the Penitentiary System in Canada, chaired by Justice Mark MacGuigan.[7] The 1977 MacGuigan Report recommended the creation of an Independent Chairperson (ICP) to investigate prisoner complaints.[8]

From 1971–1981, the penitentiary served as Corrections Canada's Ontario Region Reception Centre. Before it closed, the facility housed between 350 and 500 inmates plus another 120 at the Regional Treatment Centre contained within the prison. Every inmate was given an individual cell.

In its later years, Kingston Penitentiary became known as a "dumping ground for bad guards", and after an investigation by the RCMP, eight guards were terminated.[9]

In 1990, Kingston Penitentiary was designated a National Historic Site of Canada.[10][11]

On April 19, 2012, the Government of Canada announced plans to close the Kingston Penitentiary, along with the Leclerc Institution in Laval, Quebec and the Regional Treatment Centre in Kingston, Ontario.[12] Kingston Penitentiary officially closed on September 30, 2013.[13] The penitentiary was opened during October/November 2013 for public tours hosted by the United Way of KFL&A and Habitat for Humanity Canada.[14][15]

On September 10, 1923, inmate Norman "Red" Ryan planned and carried out an escape with a number of fellow inmates. After setting fire to a shed as a distraction, the gang used a ladder and went over the wall. They stole a car from a nearby property and fled the city.[16]

On September 20, 1991, inmate Robert Brule escaped prison custody by feigning illness. On the way to the hospital in Kingston, he ran from guards after using a homemade handcuff key to release his restraints in the prison washroom before getting into an ambulance. He remained at large for a number of hours until he was apprehended by police and off-duty corrections officers. Reported on front page of the Kingston - Whig Standard September 21, 1991.

In 1999, inmate Ty Conn escaped from the facility. Although there had been at least 26 escape attempts since 1836, Conn was the first to evade capture for weeks since 1958. Two weeks later, surrounded by police in Toronto, Conn suffered a fatal self-inflicted gunshot wound while speaking on the telephone to CBC producer Theresa Burke.[17][18]

Kingston Penitentiary had been home to many of Canada's most dangerous and notorious criminals. James Donnelly, patriarch of the Black Donnellys, was sentenced to be hanged on September 17, 1859, for the murder of Patrick Farrell. A petition for clemency started by his wife Johannah saw his sentence reduced to seven years in Kingston Penitentiary.

Other notable inmates include Russell Williams,[19] Paul Bernardo, Clifford Olson, Roger Caron and Grace Marks. Wayne Boden, the Canadian "Vampire Rapist" died there in March 2006. Tim Buck, leader of the Communist Party, was a prisoner at Kingston Penitentiary convicted under Section 98 of the Criminal Code during the early 1930s. Marie-Anne Houde, formerly convicted for the murder of her stepdaughter Aurore Gagnon, was sentenced to life in Kingston Penitentiary, following the appeal to commute her sentence to death citing health reasons. She was released on June 29, 1935.[20]

Mohammad and Hamed Shafia were imprisoned in the penitentiary after being convicted of killing Mohammad's three daughters and first wife. Michael Rafferty was serving a life sentence for his role in the kidnapping, rape and murder of eight-year-old Victoria Stafford of Woodstock, but has since been relocated.

Much of Alias Grace is set in Kingston Penitentiary where the real life Grace Marks was imprisoned.

In Cataract City one of the main characters is imprisoned at Kingston Penitentiary for 20 years following a murder. 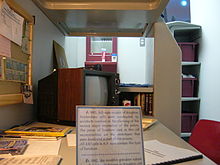