This airport consists of five passenger terminals (only three of which are in use), with eight aero-bridges each, a mosque, covered and uncovered car parking for 11,600 vehicles, an additional Royal Terminal (for the kingdom's guests, government heads, and Saudi royal family use), a central control tower (one of the world's tallest), and two parallel runways, which are each 4,260 metres (13,980 ft) long. Formerly the largest airport in the world in terms of ground area, the land area allocated for KKIA is the second-largest in the world, after King Fahd International Airport.[5] The airport is managed and operated by Riyadh Airports Company. The Royal Mosque, with stained glass by British architectural artist Brian Clarke, was a landmark work in the history of the medium, considered to be the largest and technically most advanced stained glass project of the modern period.[6]

King Khalid International Airport (KKIA) opened for operations in late 1983. Until then, what is now Riyadh Air Base served commercial flights to and from Riyadh. Increased international and local air transport requirements for Riyadh made the change necessary. Riyadh Air Base, which is much closer to the city center, is operated by the Royal Saudi Air Force.

This airport was an alternative landing site for NASA's Space Shuttle.[7] 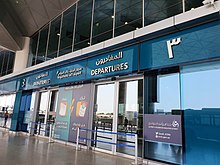 There are five main passenger terminals at the airport, four of them were built when the airport started operation in 1982, and terminal 5 was opened in 2016.

1 to 4 were built when the airport was opened in November, 1983. They are connected to each other by means of three linking buildings, These buildings are 168 metres (551 ft) long. Each terminal is triangularly shaped, it has a triangular base of 47,500 square metres (511,000 sq ft) area. The complex includes a modern VIPs terminal plus restaurants, cafeterias, airlines offices, government departments, hotels and rent-a-car companies counters, banks, first aid clinics and commercial shops.

The US Secretary of Defense Robert Gates walks with U.S. Ambassador to Saudi Arabia James Smith after arriving at King Khalid International Airport.

Heads of state and other high-ranking VIP visitors to the kingdom are greeted in the Royal Pavilion. The Royal Pavilion has open spaces, garden areas, and fountains. A ceremonial hall 12.5 metres (41 ft) wide and 390 metres (1,280 ft) long connects it to the mosque. The design and geometry of the building are similar to those of the other terminals architecturally and in the aesthetic respect. Arriving guests can use either air bridges or escalators to enter the building from the aircraft parking area. The ceremonial area on the airside has space for special receptions involving honor guards and bands. Like the passenger terminals, the Royal Pavilion has a triangular plan, with a roof composed of 33 arched sections rising to a high point 30 metres (98 ft) above the ground level. Glass walls and windows illuminate the interior of the building.

A general aviation complex has been constructed north of runway number 1 for use by private aircraft and is reached by a special access road which runs north from the airport access highway. The general aviation facility includes a passenger terminal, aircraft parking and maintenance facilities, taxiways and parking for visitors, tenants and staff. In addition to privately owned aircraft, this facility accommodates Saudia's special flight services group. It's also home to Alsalam Aircraft Company, Ltd. Programmed Depot Maintenance (PDM) on Royal Saudi Air Force aircraft is performed at the uniquely designed facility. 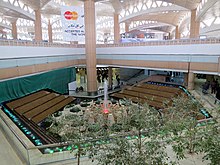 Fountain at the airport

There are 19 separate floor levels in the tower, including the operations area at the base of the tower and a total of 1,230 square metres (13,200 sq ft) of floor space. Six of the 19 floors are considered main floors. These include the operational level at the base of the tower, two equipment floors, an observation floor, a service floor and the cab floor at the top of the tower from which the air traffic controllers overlook the entire airport. The operations floor houses the radar control center for the airport as well as conference rooms, offices and a training area. The two equipment level contain mechanical and electrical equipment and cables, and the service floor contains a kitchen, lounge and lavatories for personnel on duty in the cab. The cab itself contains controller operating positions and electronic and communications equipment. The tower is supplied with two sources of standby power should the regular source of power be interrupted. Once source is the standby power supply at the central power plant – three diesel engine generators. In addition, a 300-kilowatt diesel engine located in the tower itself can provide a secondary source of emergency power. The tower is outfitted with the most advanced electronic radar systems and data processing equipment available.

Passengers going from one terminal to another at King Khalid International Airport can utilize moving sidewalks for transportation. The moving walkways, the first to be installed at any Saudi airport, are located in the three link buildings that connect the international and domestic terminals.

There is a total of 1,196 metres (3,924 ft) of the walkways, which are actually wide conveyor belts which operate at floor level and move at a speed of close to 1 metre per second (2.2 mph). Additional passenger conveniences in the terminal complex include 80 elevators and escalators. In the parking garages, 16 escalators are provided, and two serve the mosque.

The elevators, escalators and moving walkways all have the latest safety equipment installed. Should a fire occur, the elevators would automatically be recalled to the main floors and the doors opened. The escalators and moving sidewalks are equipped with fire and smoke detectors which will cause them to stop automatically should a fire be detected. 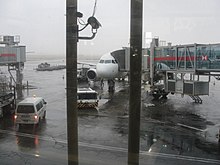 An airbridge connected to an Airbus A320.

KKIA was the first airport in the Kingdom to install airbridges, to speed up handling and turnaround times. Each terminal has eight gates with airbridges effectively eliminating the need for bus journeys between the terminal buildings and waiting aircraft.

The design of KKIA Mosque is one of the most distinct landmarks in the airport by virtue of its Islamic architecture. It can accommodate 5,000 worshipers inside and another 5,000 in the plaza outside.[4] Its location in the center of the passenger terminal establishes it as the most important structure on the airport and makes it the first sight visitors see as they leave the arrival area. The dome is 33 metres (108 ft) in diameter and internally clad in polished bronze,[11] and towers 40 metres (130 ft) above the arrivals level roadway, higher than all of the other structures in the passenger complex with the exception of the control tower and minaret.

The interior of the Royal Mosque at KKIA, with stained glass by Brian Clarke and mosaic by Clarke and Edman Ayvazyan.

In 1982, through the Vesti Corporation, the British architectural artist Brian Clarke was commissioned to design and fabricate stained glass for the interior of the Royal Mosque. Clarke studied Islamic ornament at the Quran schools in Fez and Tangiers for six weeks. The Royal Mosque, completed in 1982 and containing 2,000 square metres of stained glass, was considered to be the largest and technically most advanced stained glass project of the modern period, requiring the full staff of 4 stained glass factories and 150 craftsmen, taking a year to fabricate. The calligraphic mosaic band was designed by Iranian-Armenian painter Edman Ayvazyan, and fabricated with Clarke's assistance.

In the northeast corner of the mosque plaza, a minaret rises 39 metres (128 ft) above the plaza level. A spiral stairway inside the minaret provides access to loudspeakers that broadcast the prayer calls five times daily. There are 5,030 square metres (54,100 sq ft) of floor space on the main floor of the mosque and another 765 square metres (8,230 sq ft) on the mezzanine floor. A Koranic library off of the main mosque floor has 50 square metres (540 sq ft) of user space and the same amount for storage space. The library, private offices and lavatories are located along the southeast on southwest walls.

KKIA has more than 500,000 square metres (5,400,000 sq ft) of landscaping. Over 225,000 trees, vines, shrubs and ground cover plants were used to landscape the airport site and the interior courtyards. A factor in the landscape design was the limited availability of irrigation water. All of the plants selected for the site are tolerant of heat, wind and dry soil conditions. Wherever possible, plants with a history of successful growth in the Riyadh area or similar environments were selected.

This facility has five separate fire houses, with several modern firefighting vehicles, and trained firefighters. The location also has security equipment and a security force.

Two large three-level garages have been constructed directly in front of the passenger terminals, one on either side of the airport mosque. They are connected to the terminals and to the mosque by pedestrian walkways under the arrivals level roadway. The design capacity of the garages is 11,600 vehicles. The garages are built of cast-in-place concrete, and each covered level is 4 metres (13 ft) high. Escalators and elevators are available in these garages, as well as stairways between the different levels.

In July 2014, German construction company Hochtief won the bid for the airport expansion which aims at increasing its capacity from 15 million to 25 million and includes construction of a new fifth terminal.[45] The contract was valued at €1.3 billion and will be carried out by Hochtief with a 55% stake, along with Indian engineering company Shapoorji Pallonji Mideast and Saudi Arabian construction company Nahdat Al Emaar. Construction is expected to be completed by May 2019.[46] Terminal 4 is expected to be equipped with required facilities. KKIA has not witnessed any development since its establishment in 1983.

The airport will be linked with the city's new metro system, and the GACA has reached an agreement with Riyadh Development Authority for the purpose. The metro system will help passengers reach the city center quickly and comfortably, adding that spots have been allocated in the project for the metro lines. Saudi Railway Company will construct the main railway station on the southeastern part of the airport to be linked with the terminal through the metro system. 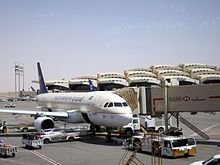 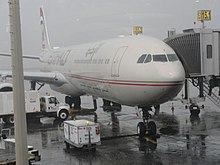 an Etihad Airways Airbus A340 at the gate.