Members of the Kimbanguist Church in Nkamba celebrating Christmas , 25 May 2016. The church shifted observance of Christ's birth to the birthday of leader Salomon Dialungana, who is believed to be Christ reincarnated.

Kimbanguism (French: Kimbanguisme) is a Christian new religious movement professed by the Church of Jesus Christ on Earth by His special envoy Simon Kimbangu (French: Église de Jésus Christ sur la Terre par son envoyé spécial Simon Kimbangu) founded by Simon Kimbangu in the Belgian Congo (today the Democratic Republic of the Congo) in 1921. It is considered a branch of Christianity. A large, independent African-initiated church, it has an estimated 22.5 million believers and has its headquarters in Nkamba.

Main article: Christianity in the Democratic Republic of the Congo

In April 1921, Kimbangu, a Baptist mission catechist, inaugurated a mass movement through his supposed miraculous healings and biblical teaching. The Belgian authorities treated the faith with suspicion and imprisoned Simon Kimbangu until his death in 1951. The church was formally recognised by the Belgian colonial authorities in 1959.

Life and works of Kimbangu

According to the church, Simon Kimbangu is said to have come down to earth from Mount Zion as a Congolese infant. His father had been a traditional religious leader, but both parents died and Kimbangu was orphaned and put in the care of his maternal aunt. She took him to Baptist missionary school where he studied for many years. He grew up to be a Baptist.[citation needed]

In 1921, the mother of a deceased child is said to have approached Kimbangu while he was talking to his disciples. He said to her, "Have faith in Me. I will give you a miracle and you will know the truth about me. I will do something great for your daughter and you will see God's glory", and raised her child from the dead.[citation needed] 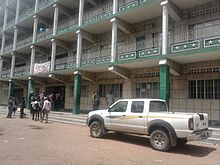 Kimbanguist university in Kalamu, Kinshasa, Democratic Republic of the Congo.

The church eschews politics and embraces Puritan ethics, rejecting the use of violence, polygamy, magic and witchcraft, alcohol, tobacco, and dancing. Its worship is Baptist in form, though the Eucharist was not introduced until 1971.

The three key dates in the Kimbanguist calendar are 6 April (marking the date of the start of the ministry of healing), 25 May (marking Christmas,[1] falling on the birthday of Father Dialungana), and 12 October (Kimbangu's death anniversary). The church is largely non-sacramental, with large services that are well-organised.

The church also believes that Father Simon Kimbangu is the Holy Spirit,[citation needed] in accordance with John 14:15-17. Like many Christian groups, the Kimbanguists begin and end prayers with the Trinitarian formula.