Khammouane Province (Khammouan) (Lao: ຄໍາມ່ວນ) is a province in the center of Laos. Its capital lies at Thakhek.

Khammouane Province covers an area of 16,315 square kilometres (6,299 sq mi) and is mostly of forested mountainous terrain. Many streams flow through the province to join the Mekong River. The vast forests of the Nakai-Nam Theun Biodiversity Conservation Area are an important watershed that feed many Mekong tributaries as well as form the catchment area for Nam Theun 2, the largest hydropower project in Laos. The Xe Bang Fai River, Nam Hinboun River, and the Nam Theun are the main rivers of the province.

Part of the aborted Thakhek-Tan Ap railway would have crossed the province to connect with the North-South Railway at Tân Ấp Railway Station, Quảng Bình Province, Vietnam through Mụ Giạ Pass.

Khammouane Province covers an area of 16,315 square kilometres (6,299 sq mi) and is mostly of forested mountainous terrain.[2] The province is bordered by Bolikhamsai Province to the north and northwest, Vietnam to the east, Savannakhet Province to the south, and Thailand to the west.[3] Many streams flow through the province to join the Mekong River. The major rivers originating in the mountains of the province are the Xebangfay River (239 kilometres (149 mi) long), Nam Hinboun, Nam Theun, and Nam Ngum River.[4] Between the Mekong and the Annamite Range, the Khammouane Plateau features gorges, grottoes, jungles, limestone hills, and rivers.[5]

Thakhek, the provincial capital, is on the Mekong River bordering Thailand. The border checkpoint is Nakhon Phanom. The city has many buildings designed in the French colonial architectural style.[4] The Third Thai–Lao Friendship Bridge, opened to traffic on 11 November 2011, spans the Mekong River. The bridge is 1,423 metres (4,669 ft) long and 13 metres (43 ft) wide.[6]

Tham Khonglor Cave (meaning: 'beauty in the dark') is part of the National Protected Forest Area in Hinboun Mountain. Its west entrance is from Ban Khonglor village in Hinboun District, while the east entrance is from Ban Natan village, Nakai District. The cave runs for a length of about 7.4 kilometres (4.6 mi). Its width varies from 10 metres (33 ft) to 90 metres (300 ft). Its height is in the range of 20 metres (66 ft) to 100 metres (330 ft). The Hinboun River flows through the cave perennially. Vang That and Had Xay Luang are the two hanging rock formations in the cave. Had Xay Luang is a white sand beach here, of about 150 metres (490 ft) in length and 100 metres (330 ft) width.[4] The cave is approachable along two routes, one from Vientiane along Route 13 to Hinboun District, and the second route is by boat along the Hinboun River.[4] 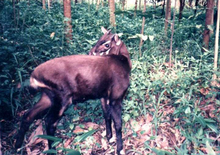 In 1996, Western scientists discovered a rodent in Khammouan representing a mammal family that had been previously known only from fossils. The Laotian rock rat or kha-nyou (Laonastes aenigmamus), also called the "rat-squirrel", was formally described as a new species in 2005. The species was first described in a 2005 article by Paulina Jenkins and coauthors, who considered the animal to be distinct from all living rodents. They placed it in a new family, Laonastidae. It is in the monotypic genus Laonastes.'[7][8]

The Khammouane IBA is in the Phou Hin Poun NBCA. The IBA is 79,000 ha in size with an elevation of 200–900 metres (660–2,950 ft). The topography and habitat are characterized by sparsely vegetated limestone karst, semi-evergreen forest, mixed deciduous forest, as well as non-calcareous substrate. The IBA is notable for supporting the sooty babbler (Stachyris herberti) and a taxon of François' langur (Trachypithecus francoisi).[11]

The province is composed of the following nine districts:[4]

Thakhek, the provincial capital, is an important centre for trade. Along with Bolikhamsai and Savannakhet Provinces, it is one of the main tobacco producing areas of Laos.[13] Part of the province, particularly Yommalath District, was badly affected by floods caused by heavy rain in July 2011, affecting rice farmland in the district, inundating almost 700 hectares, destroying dozens of fishponds and killing 112 cattle. There are several major operating mining companies in the province, including Mining Development Economy Corporation mining gypsum in Thakhek District, LAVICO Co. Ltd, which is a Laos-Vietnam joint venture mining gypsum in Xebangfay District, V.S.K. Co. Ltd mining limestone in Thakhek District), and Lao-North Korea Tin Mines mining tin in Hinboun District.[14] Several culinary specialties are also native the province including Kha Nom Phane, a type of rice cake.

That Sikhottabong, also known as Sikhottabong Stupa, is a contemporary of That Inhangin Savannakhet and That Phanom, built in Thailand under the Sikhottabong Empire. The bones of Lord Buddha are said to be consecrated in these temples. King Nanthasene built the stupa for King Soummitham. It was refurbished in the 15th century during the reign by King Saysethathirath. The stupa has four squares with each side measuring 25,030 metres (82,120 ft) long and its base is 14.33 square metres (154.2 sq ft) and rises to a height of 29 metres (95 ft). The pinnacle appears in the shape of the banana flower. The stupa is seen on the bank of the Mekong River. Its festival is held during the third lunar month.[4]

The Great Wall, built of stones, starts on the west side of Thakhek. It is 8 kilometres (5.0 mi) from the city, on Route 13. It extends from the Namdone River and its total length is about 15 kilometres (9.3 mi). Some sections of the wall are seen in Thakhek also. Its construction is attributed to the period of the Sikhottabong Empire in the 19th century and is now proposed to be preserved as a national heritage site.[4]