Kentville is a town in Kings County, Nova Scotia. It is one of the main towns in the Annapolis Valley, and it is the county seat of Kings County. As of 2016, the town's population was 6,271. Its census agglomeration is 26,222.

Kentville owes its location to the Cornwallis River which downstream from Kentville becomes a large tidal river. The riverbank at the future location of Kentville provided as easy fording point. The Mi'kmaq name for the location was "Penooek".[2] The ford and later the bridge at Kentville made the settlement an important crossroads for settlements in the Annapolis Valley. Kentville also marked the limit of navigation of sailing ships.

The area was first settled by Acadians, who built many dykes along the river to keep the high Bay of Fundy tides out of their farmland. These dykes created the ideal fertile soil that the Annapolis Valley is known for. The Acadians were expelled from the area in the Bay of Fundy Campaign (1755) by the British authorities because they would not swear allegiance to the British King. The area was then settled by New England Planters. Settlement was expedited by the United Empire Loyalists during the American Revolution.

The town was originally known as Horton's Corner, but was named Kentville in 1826 after Prince Edward Augustus, Duke of Kent (son of King George III and father of Queen Victoria), who resided in Nova Scotia from 1794 to 1800. The village was at first relatively small and dwarfed by larger valley towns with better harbours such as Canning and Wolfville. The crossroads location did attract early shopkeepers and several stagecoach inns. Small schooners were able to land cargos in the "Klondyke" neighhourhood by the Cornwallis River which marked the height of navigation.[3] Kentville developed a reputation for rowdy drinking and horseraces in the early 19th century, earning the nickname "the Devil's half acre." 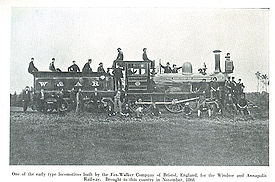 Windsor and Annapolis Railway locomotive Gabriel in Kentville, circa 1870

When the Windsor and Annapolis Railway (later named Dominion Atlantic Railway) established its headquarters in Kentville in 1868 and began shipping Annapolis Valley apples to British markets, the community began to thrive. The railway not only employed a large number of people, up to a third of the town's population, but also attracted other industries such as mills, dairies, a large foundry, and a carriage works which even entered automobile production. A branchline of the Dominion Atlantic, the Cornwallis Valley Railway, was built north to Canning and Kingsport in 1889 furthering developing the apple industry and creating a suburban line for workers, shoppers and schoolchildren to commute to Kentville. The railway also attracted large institutional developments such as a large regional TB hospital, the Kentville Sanitorium, a federal agricultural research station, and an army training base at Camp Aldershot.[4]

The town became a major travel centre highlighted by the large Cornwallis Inn built at the town's centre by the railway. The town boomed during World War I and World War II with heavy wartime railway traffic on the Dominion Atlantic and the training of thousands of troops at Camp Aldershot. Many residents fought overseas in the local West Nova Scotia Regiment as well as other branches of service. A Royal Canadian Navy minesweeper HMCS Kentville was named after the town, and her crew often took leave in Kentville.

Kentville faced serious challenges after World War II. The dominant apple industry suffered severe declines due to the loss of its British export market. The nearby military training base at Camp Aldershot was significantly downsized and the town's major employer, the Dominion Atlantic Railway suffered serious declines with the collapse of the apple industry and the growth of highway travel. Further decline followed in the 1970s as the town lost its retail core to the growth of shopping malls and later "big box" stores in nearby New Minas. The town was also eclipsed in restaurant, upscale retail and cultural institutions by the nearby university town of Wolfville.[5] Railway passenger service ended in 1990. Freight service ended in October 1993 and the Kentville rail shops were closed and moved to Windsor, Nova Scotia.[6] Kentville lost many heritage buildings in the postwar period and is one of the only towns in Nova Scotia without a single designated heritage building. Major losses included the large railway station, one of the most historic in Canada which was demolished in 1990. In July 2007 the town demolished the last railway structure in town, the DAR Roundhouse, despite a province-wide protest, a move which earned the Town of Kentville a place on the "2008 Worst" List of the Heritage Canada Foundation.[7]

Kentville's 2011 population of 6,094 people reflects a modest population growth of 4.6% which has been lower than Kings County as a whole (7.1%) but slightly higher than the provincial average (3.0%).[11] Kentville's own population however is closely integrated with adjacent communities of Coldbrook and New Minas making for a combined population of 14,613 and forming part of the fast-growing area of eastern Kings County with an overall population of 25,969. The median household income in 2005 for Kentville was $44,164, which is below the Nova Scotia provincial average of $46,605.[12] 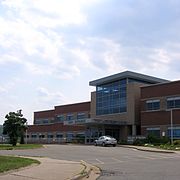 During the early part of the 20th century Kentville emerged as the business centre of Kings County and despite the post-war loss of commerce to other valley communities, it remains the professional centre of the Annapolis Valley. Kentville is home to numerous professional services such as lawyers offices, doctors, and investment firms. On the outskirts of the town is the Valley Regional Hospital, built in 1991. The town is also home to the Annapolis Valley Regional Industrial Park which employs numerous people in the area through a variety of different businesses.

Agriculture, especially fruit crops such as apples, remain a prominent industry in the Kentville area, and throughout the eastern part of the valley. Kentville is home to one of the largest agricultural research facilities in Nova Scotia founded in 1911, known to the locals as The Research Station. The site now employs over 200 people and sits on 473 acres (1.91 km2) of the land at the east end of the town.

Kentville shares its northern boundary along the Cornwallis River with Camp Aldershot, a military training base founded in 1904. At its peak during World War II, the camp housed approximately 7000 soldiers. Kentville native Donald Ripley wrote a book chronicling Camp Aldershot and its effect on the town entitled On The Home Front.[13] Today the camp functions as an army reserve training centre and is the headquarters of The West Nova Scotia Regiment.

Kentville until 1997-8 was one of seven Nova Scotia towns (along with Riverport, Berwick, Canso, Antigonish, Lunenburg and Mahone Bay) to own its own electricity distribution utility within town limits – the Kentville Electric Commission. When the other six joined into the Municipal Electric Utilities of Nova Scotia in January 1998,[2] Kentville instead sold its utility to Nova Scotia Power, a privately owned generator and distributor whose service area covered the rest of the province.

The Apple Blossom Festival, founded in 1933 is held each May to celebrate the blossoming of local apple industry, one of the region's richest forms of agriculture.

Kentville is also well known for its Pumpkin People Festival.

(From in or near Kentville, including the former Township of Cornwallis)

The Museum on Webster Street, Kentville.

Education in the area is serviced by Kings County Academy in Kentville, serving grades primary through eight, the local high school is Northeast Kings Education Centre, located 15–20 minutes away in Canning. There are also several post secondary institutions, the Kingstec campus of the Nova Scotia Community College is located on the northern fringe of the town and Acadia University[3], is located in nearby Wolfville. The town operates a library and C@P site. Kentville is also home to the Kings County Museum, located in Kentville's old courthouse.