Kempton Park is a city in Ekurhuleni in the Gauteng province, South Africa. Kempton Park has been part of the City of Ekurhuleni Metropolitan Municipality since the year 2000. It is situated south of Tembisa, one of the largest townships in South Africa, which is also integrated into Ekurhuleni. The name of the city is sometimes written as "Kemptonpark" in Afrikaans.

Kempton Park lies on what was two Boer farms in the South African Republic (ZAR). The first farm was Zuurfontein No 369 with the title deed issued to Johannes Stephanus Marais on 25 October 1859 and surveyed to be 3000 morgen on 12 December 1859.[2]:17 The second farm northwest of the first was registered to Cornelius Johannes Beukes in March 1865 and was called Rietfontein 32 IR.[2]:17 After the discovery of gold in Johannesburg, 22 km southeast of the farms in 1886, a railway connecting Pretoria to Vereeniging and to the Cape line was constructed in the early 1890s.[2]:17 The railway line did not go through Johannesburg, but passed to the east through the two farms with a station called Zuurfontein.[2]:17 That station would be linked by a side-rail to the Zuid-Afrikaansche Fabrieken voor Ontplofbare Stoffen, a dynamite factory a few kilometres north west.[2]:17

The city was established on 24 August 1903 when Karl Friedrich Wolff sub-divided a portion of his Zuurfontein farm into 216 residential stands and named the new town Kempten after the German town in Bavaria of his birth.[3]:302 The name was anglicised into Kempton Park.[4]

Kempton Park after take off from OR Tambo International Airport

The storming of Kempton Park World Trade Centre took place on 25 June 1993 when approximately three thousand members of the Afrikaner Volksfront (AVF), Afrikaner Weerstandsbeweging (AWB) and other paramilitary White Nationalist Afrikaner groups stormed the World Trade Centre in Kempton Park. At the time of the attack the World Trade Centre was the venue for multi-party CODESA negotiations to end the apartheid system through the country's first multi-racial elections. These negotiations were strongly opposed by some White groups in South Africa. The invasion came after other clashes between police and right-wingers, such as the Battle of Ventersdorp, and much belligerent rhetoric from supremacists such as Eugène Terre'Blanche of the AWB.

Kempton Park was declared a City in 1992 and has the following suburbs:

Tembisa is a large township situated to the north of Kempton Park in Ekurhuleni, Gauteng, South Africa. It was established in 1957 when Africans were resettled from Alexandra and other areas in Edenvale, Kempton Park, Midrand and Germiston. 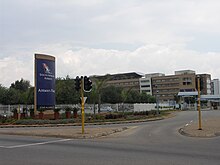 Spartan is a large industrial zone which houses many chemical manufacturing and other industrial sites. North-west of Kempton Park lies the heavy industry suburb of Modderfontein with one of the main companies there, the AECI Dynamite factory.[10]:286 Kempton Park also has a large coal power station named Kelvin power station which supplied power to the City of Johannesburg. The Emperor's Palace Casino is also located in Kempton Park.

The city has ten major schools:

The Kempton Park Golf Course, first designed in 1965, in Spartan, is known as the club where Ernie Els learnt how to play golf.