Founded by the government in 2002 as a joint stock company KTZ’s task is to develop, operate, and maintain railway transportation in Kazakhstan. It is headquartered in Nur-Sultan. Related stock companies own the rolling stock, the hauling equipment, and the passenger transport division. Repair facilities have been privatized. Private companies may own or rent rolling stock that can use the rail system. 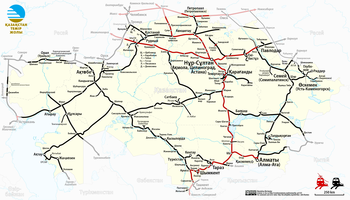 The current rail network is based on the inheritance from the former Soviet Union and as such has a broad gauge of 1,520 mm (4 ft 11 27⁄32 in). While this provides a smooth transit at international borders to countries of the former Soviet Union, the railway in China has the standard gauge of 1,435 mm (4 ft 8 1⁄2 in); thus there is a break-of-gauge at Dostyk and at Khorgas/Altynkol.[1]

KTZ controls about 15,000 km (9,300 mi) track (2005) which is being expanded. The Kazakhstan sections of the old Trans-Aral Railway, the Trans-Caspian railway, and the Turkestan-Siberia Railway have been incorporated into the KTZ. 3000 km are electrified at 25 kV 50 Hz AC.

KTZ is the largest employer in Kazakhstan with about 143,000 employees (2008).[2] It manages over 80,000 wagons, 50,000 of them state-owned, and the remainder in private hands. While most of the hauling is done by diesel engines, electrification of track is an ongoing project. The company is profitable and its 2008 revenues were 483.8 billion Kazakhstani tenge (US$3.9 billion).[2]

Kazakhstan has started to build wagons for KTZ and is expected to produce engines in conjunction with GE in 2008.[3]

100% of KTZ's shares are owned by the state through the Samruk-Kazyna fund. Adamas Ilkyavichyus[4] is the chairman of the Board of Directors of Kazakhstan Temir Zholy. Askar Mamin is the chairman of the management board of the company. Sultanov Arman Turlykhanovich is the director of JSC "Civil passenger traffic" (АО "Пассажирские перевозки") and Momynkul Mukhit Mukhtiarovich is the director of affiliated branch "Express" ("Экспресс").

The FEZ "Khorgos-Eastern Gate" is a logistics center for the distribution of cargo flows on the New Silk Road, and further integrates Kazakhstan into the global transport and trade system, particularly between China and the European Union.[5] 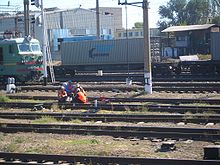 At the Shu Junction

The potential of Kazakhstan to act as a transit in the trade between China, Europe, and even the eastern coast of America, as envisioned in the Trans-Asian Railway proposal, has not yet been fulfilled. Current rail transport between China and Europe as part of the Eurasian Land Bridge goes over the Trans-Siberian railway, is lengthy, and requires bogie exchanges.

KTZ is engaging on a major railroad project to link China and Southeast Asia to Europe for a length of 3,900 kilometres (2,400 mi). Currently the plan is to run the railway through Turkmenistan to Iran; Iran is linked to Turkey and Europe's standard gauge system[6] In May 2013, a new rail link opened between Uzen (Kazakhstan) and Serhetyaka (Turkmenistan), crossing the border at Bolashak. The railway is 146 km long and cost 65bn tenge. The railway is Russian gauge; there would be a break of gauge when the railway reaches the Iranian border.[7]

Construction for the new line will start at the eastern border town of Druzhba to go to Aktau on the Caspian Sea. Construction is expected to start in 2006 and take four years. The total cost of the project is $5–7 billion.[8] A link from Aktau to Iran is also required.

The transport corridor through Kazakhstan has the potential to provide a railway-ship link between China and the east coast of North America through the Northern East West corridor.[9]

In October 2010, Kazakhstan Temir Zholy ordered 295 KZ8A electric locomotives from Alstom, for both freight and passenger services.[10] On October 3, the first train of this order was delivered during an official ceremony. While the first 10 pre-series of KZ8A locomotives are being manufactured at Alstom’s Belfort facility, the remaining will be built in Nur-Sultan, in the new Alstom plant in Kazakhstan which will be inaugurated on December 12, 2012. Besides, on October 8, 2012, KTZ signed its first maintenance contract with Alstom for the full maintenance, major overhaul and modernization of 27 passenger locomotives KZ4AC for a period of 25 years.[11]

In November 2010, KTZ awarded Talgo a contract to replace its fleet of 3000 intercity vehicles.[12] After the delivery of some of these vehicles, it was announced in October 2019 that this order had been cancelled.[13]

In the early 2010s, a project for building a high-speed railway between Nur-Sultan and Almaty was actively discussed by the Kazakh and Chinese officials. However, in 2013 the project was postponed due to high cost.[14]