The Kazakh Steppe (Kazakh: Qazaq dalasy, Қазақ даласы, also Uly dala, Ұлы дала "Great Steppe"), also called the Great Dala, ecoregion, of the Palearctic temperate grasslands, savannas, and shrublands biome, is a vast region of open grassland in northern Kazakhstan and adjacent portions of Russia, extending to the east of the Pontic steppe and to the west of the Emin Valley steppe, with which it forms part of the Eurasian steppe. Before the mid-nineteenth century it was called the Kirghiz steppe, 'Kirghiz' being an old name for the Kazakhs.

The steppe extends more than 2,200 km from the area east of the Caspian Depression and north of the Aral Sea, all the way to the Altai Mountains. It is the largest dry steppe region on earth, covering approximately 804,450 square kilometers.[1] The Kazakh Steppe lies at the southern end of the Ural Mountains, the traditional dividing line between Europe and Asia. Much of the steppe is considered to be semi-desert, grading into desert as one goes further south.[2] The Turan Lowland lies in the southwestern part of the steppe, but elevation increases as one travels east or to the northern parts of the steppe, with a few exceptions.

The region has a semi-arid, continental climate, with most of the area falling under the "BSk" classification under the Köppen climate classification system. The steppe receives from 200mm to 400mm of precipitation in an average year, with more falling in the northern areas of the steppe. Average temperatures in July range from 20C to 26C, and -12C to -18C in January. Very high winds sweep across the plains at times.

Animals that can be found in the steppes of Kazakhstan include the Saiga Antelope, Siberian Roe Deer, wolves, foxes, badgers, Mongolian gerbils and steppe tortoises. 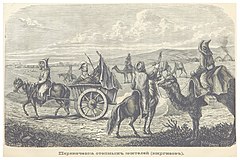 The movie Tulpan was shot and set in the Kazakh Steppe.