The Kazakh Soviet Socialist Republic[note 1] was one of the transcontinental constituent republics of the Soviet Union from 1936 to 1991 in northern Central Asia. It was created on 5 December 1936 from the Kazakh ASSR, an autonomous republic of the Russian SFSR.

At 2,717,300 square kilometres (1,049,200 sq mi) in area, it was the second-largest republic in the USSR, after the Russian SFSR. Its capital was Alma-Ata (today known as Almaty). Today it is the independent nation of Kazakhstan. During its existence as a Soviet Socialist Republic, it was ruled by the Communist Party of the Kazakh SSR.

On 25 October 1990, the Supreme Soviet of the Kazakh SSR declared its sovereignty on its soil. Nursultan Nazarbayev was elected as president – a role he remained in for the next 29 years.

The country is named after the Kazakh people, Turkic-speaking former nomads who sustained a powerful khanate in the region before Russian and later Soviet domination. The Soviet Union's spaceport, now known as the Baikonur Cosmodrome, was located in this republic at Tyuratam, and the secret town of Leninsk (now known as Baikonur) was constructed to accommodate its personnel.

Between 1932 and 1933, as a consequence of enforced collectivisation and the disruption to the traditional nomadic lifestyle of many Kazakhs, a famine struck Kazakhstan, killing 1,500,000 people during the catastrophe of whom 1,300,000 were ethnic Kazakhs.

In 1937 the first major deportation of an ethnic group in the Soviet Union began, the removal of the Korean population from the Russian Far East to Kazakhstan. Over 170,000 people were forcibly relocated.

Over one million political prisoners from various parts of the Soviet Union passed through the Karaganda Corrective Labor Camp (KarLag) between 1931 and 1959, with an unknown number of deaths.[1]

During the 1950s and 1960s, Soviet citizens were urged to settle in the Virgin Lands of the Kazakh Soviet Socialist Republic. The influx of immigrants, mostly Russians, skewed the ethnic mixture and enabled non-Kazakhs to outnumber natives. As a result, the use of the Kazakh language declined, but has started to experience a revival since independence, both as a result of its resurging popularity in law and business and the growing proportion of Kazakhs. The other nationalities included Ukrainians, Germans, Jews, Belarusians, Koreans and others; Germans at the time of independence formed about 8% of the population, the largest concentration of Germans in the entire Soviet Union. Kazakh independence has caused many of these newcomers to emigrate.

Following the dismissal of Dinmukhamed Konayev, the First Secretary of the Communist Party of Kazakhstan by the last Soviet leader, Mikhail Gorbachev, the riots broke out for four days between December 16 to December 19, 1986 known as Jeltoqsan by student demonstrators in Brezhnev Square in the capital city, Alma-Ata. Approximately 168–200 civilians were killed in the uprising. The events were then spilled over to Shymkent, Pavlodar, Karaganda and Taldykorgan.

On March 25, 1990, Kazakhstan held its first elections with Nursultan Nazarbayev, the chairman of the Supreme Soviet elected as its first president. Later that year on October 25, it then declared sovereignty. The republic participated in a referendum to preserve the union in a different entity with 94.1% voted in favour. It did not happen when hardline communists in Moscow took control of the government in August. Nazarbayev then condemned the failed coup.

As a result of those events, the Kazakh SSR was renamed to the Republic of Kazakhstan on December 10, 1991. It became independent on December 16 (the fifth anniversary of Jeltosqan), becoming the last republic to secede from the USSR. Its capital was the site of the Alma-Ata Protocol on December 21, 1991 that dissolved the Soviet Union and formed the Commonwealth of Independent States in its place which Kazakhstan joined. The Soviet Union officially ceased to exist as a sovereign state on December 26, 1991 and Kazakhstan became an internationally recognized independent state.

On January 28, 1993, the new Constitution of Kazakhstan was officially adopted. 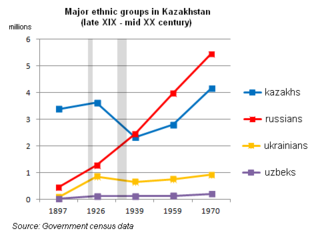 One of the greatest factors that shaped the ethnic composition of Kazakhstan was 1920s and 1930s famines. According to different estimates only in famine of 1930s, up to 40% of Kazakhs (indigenous ethnic group) either died of starvation or fled the territory.[3] Official government census data report the contraction of Kazakh population from 3.6 million in 1926, to 2.3 million in 1939.

Upon the start of the Second World War, many large factories were relocated to the Kazakh SSR.

After the war, the Virgin Lands Campaign was started in 1953. This was led by Nikita Khrushchev, with the goal of developing the vast lands of the republic and helping to boost Soviet agricultural yields. However it did not work as promised, the campaign was eventually abandoned in the 1960s.[4]