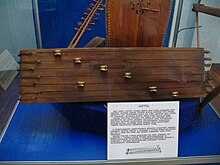 A jetigen harp on display at the museum.

Located in Panfilov Park, the wooden building was erected in 1908, simultaneously with Ascension Cathedral. During the period, the military leadership of the Turkestan governor-generalship once met here for ceremonies and state receptions.

After the establishment of the Soviet Union, the building was used as the House of Officials until 1980, when it was transformed into the musical instruments museum.

The museum was named after Great Kazakh musician of 19-20th centuries Ykylas, who promoted the purity of folk culture and preservation of various national instruments.

Today, there are more than 1000 items of instruments in collection of the museum, which are divided on 60 types of Kazakh national musical instruments. The collection also includes instruments, which were owned by famous singers-improvisers and composers. The most ancient exhibits are dated back to the 17th century.

From the outside the building is made of wood and resembles the traditional Russian building. Inside the decoration corresponds to classic Kazakh national patterns. In front of the building stands a sculpture of the narkobyz, a Kazakh bow instrument.

Occasional concerts are held in the museum.