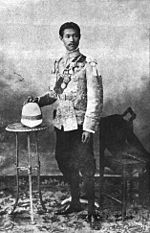 In 1902, King Chulalongkorn attempted to promote the country's silk, silverware, and weaving industries. He hired Dr Kametaro Toyama, from the University of Tokyo, to train Siamese students in Japanese silk and weaving crafts.[4] In 1904, the School of Sericulture was founded at Tambon Thung Saladaeng, Bangkok by Prince Benbadhanabongse, the Director of the Department of Sericulture of the Ministry of Agriculture.[5] The school was renamed the School of Agriculture in 1906.

In 1917, Phraya Thepsartsatit and Chaophraya Thammasakmontri of the Ministry of Education founded the first primary school of agriculture under the Ministry of Agriculture, named the Primary School Agriculture Teacher Training School in Tambon Horwang. It moved to Tambon Phra Prathon, Nakhon Pathom Province in 1918.[6] 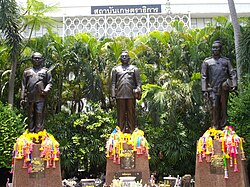 Statue of the Three Masters of Kasetsart University

In 1935, the Primary School Agriculture Teacher Training School in each part of the country was closed and merged following the agricultural education policy in that time. Luang Ingkhasikasikan, Luang Suwan Vajokkasikij, and Phra Chuangkasetsinlapakan[7] together proposed to maintain the Mae Jo School (today's Mae Jo University) at Chiang Mai Province only and renamed it Secondary-level Agriculture Technical School before it was elevated to the College of Agriculture, under the Department of Agriculture and Fisheries.

In 1943, Field Marshal Plaek Phibunsongkhram promoted the College of Agriculture and established Kasetsart University as a department of the Ministry of Agriculture.[8] The university consisted of four faculties: agriculture, fisheries, forestry, and cooperatives (today's Faculty of Economics and Faculty of Business Administration).[9]

In 1966, Mom Luang Xujati Kambhu, the Fifth President of Kasetsart University, judged the Bang Khen campus too confined and unable to support the education in agricultural sciences called for by the National Social and Economics Development Plan.[10] The Kamphaeng Saen campus was established on 12 November 1979 as a result.[11]

Kasetsart University's symbol is Phra Phirun, the god of rain mounted on a Nāga with encircled by lotus petals and then by the words "มหาวิทยาลัยเกษตรศาสตร์ พ.ศ. ๒๔๘๖" in the Thai version and "KASETSART UNIVERSITY 1943" in the English version.[15]

The nontri is a tree in the family Fabaceae. It is a long-lived evergreen with grey-brown bark with upright branches. The leaves are bipinnate compound and the flowers are yellow, produced in large compound racemes. Its fruit is a pod containing seeds. 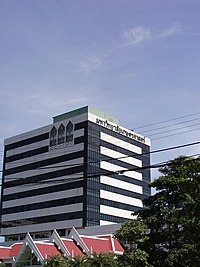 The Kamphaeng Saen Campus is the first and largest branch of Kasetsart University established in 1979. The campus is situated in Kamphaeng Saen District, Nakhon Pathom Province with the area of 7,951.75 rai (1272 hectares).

The Sriracha Campus was established in 1988, and occupies an area of 199 rai (32 hectares) in the Si Racha District of Chonburi Province.

The Chalermphakiat Sakon Nakhon Province Campus was established in 1996 to commemorate the Golden Jubilee Anniversary of His Majesty King Bhumibol Adulyadej’s Accession to the Throne. The campus occupies the area of 4,488 rai (718 hectares) in Mueang District of Sakon Nakhon Province. 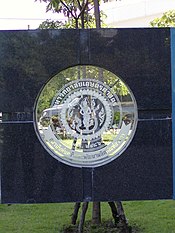 The Institute of Food Research and Product Development (IFRPD), is a science and food technology research institute, with the mandate to provide information and services to society as well as research in support of governmental policies to resolve the country's economic problems related to agricultural products.[24]

Housed at Kasetsart University's Kamphaeng Saen Campus, the center is a provider of silkworm eggs and know-how to Thai farmers.[28]

The university has given honorary degrees to heads of state and other dignitaries:

RMIT University is one of Kasetsart University's partner universities

Some of Kasetsart University's partner institutions:[33] 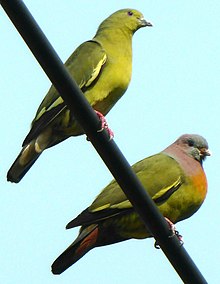