In the 1940s up to 70% of the city's inhabitants were ethnic Germans.[citation needed] Most of the ethnic Germans were Soviet Volga Germans who were collectively deported to Siberia and Kazakhstan on Stalin's order when Hitler invaded Soviet-annexed eastern Poland and the Soviet Union proper in 1941. Until the 1950s, many of these deportees were interned in labor camps, often simply because they were of German descent. The population of Karaganda fell by 14% from 1989-1999 following the dissolution of the Soviet Union; it was once Kazakhstan's second-largest city after Almaty. Over 100,000 people have since emigrated to Germany. There is also a concentration of ethnic Poles in the city.

The name "Karaganda" is derived from "caragana" bushes (Caragana arborescens, Caragana frutex), which are abundant in the area.[citation needed]

Modern-day Karaganda dates back to 1833, when local shepherd Appak Baizhanov [ru] allegedly found coal on the site of the city, prompting a coal mining boom.[4] By the late 19th century, the local mines had attracted workers from nearby villages, Russian merchants, and entrepreneurs from France and England.[4] After this initial boom, the mines were abandoned, but is often still labeled on city maps as the "Old Town", but almost nothing remains on that site.[citation needed]

Coal mining in the area resumed in 1930, and temporary structures were built for miners and their families.[4] The new area for the city was to the south of the initial mines.[citation needed] In 1931, Karaganda was incorporated as a village, and in 1934, was declared a city.[4] Lead by planner Alexander Ivanovich Kuznetsov, masters plans for Karaganda were laid out from 1934 until 1938.[4]

During the late 1930s, the Karlag Prison was built.[4] During the Stalinist purges, peoples from many different nationalities, including Germans, Karachais, Kalmyks, Chechens, Ingush, Greeks, and Crimean Tatars were sent to Karlag.[4] 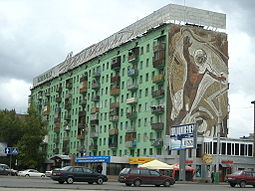 Nurken Abdirov Street at the corner of Gogol Street.

Karaganda suffered the most severe electromagnetic pulse effects ever observed when its electrical power plant was set on fire by currents induced in a 1,000 km (620 mi) long shallow buried power cable by Soviet Test ‘184’ on 22 October 1962. The test was part of the Soviet Project K nuclear tests (ABM System A proof tests), and consisted of a 300-kiloton high-altitude nuclear explosion at an altitude of 290 km (180 mi) over Zhezkazgan.

Prompt gamma ray-produced EMP induced a current of 2,500 amps measured by spark gaps in a 570 km (350 mi) stretch of overhead telephone line to Zharyq, blowing all the protective fuses. The late-time MHD-EMP was of low enough frequency to enable it to penetrate 90 cm (35 in) into the ground, overloading a shallow buried lead and steel tape-protected 1,000 km (620 mi) long power cable between Aqmola (now called Nur-Sultan) and Almaty. It fired circuit breakers and set the Karaganda power plant on fire.[5]

Kuznetsov's master plan for the city was intended to accommodate 300,000 inhabitants, which was surpassed by the late 1960s.[4] This prompted planners to devise a new plan with the goal of accommodating 600,000 people.[4] By the 1980s, the city's population surpassed 600,000 people, creating the need for further expansion.[4] In 1983, the Karaganda Circus was constructed, which was criticized for its high cost.[4]

In the early 1990s, Karaganda was briefly considered as a candidate for the capital of the (then) newly independent Republic of Kazakhstan, but its bid was turned down in favour of Astana.[citation needed]

In July 2019, remains of a young couple buried face to face dated 4,000 years back were unearthed in Karaganda region in central Kazakhstan by a group of archaeologists led by Igor Kukushkin from Saryarka Archaeological Institute in Karaganda. It is assumed that the Bronze Age couple were 16 or 17 years old when they died. Kukushkin supposes that they were from a 'noble family' thanks to the buried gold and jewelry artifacts, ceramic pots, woman's two bracelets on each arm beads, remains of horses and knives found in the grave.[6][7][8]

Karaganda has a humid continental climate (Köppen climate classification Dfb) with warm summers and very cold winters. Precipitation is moderately low throughout the year, although slightly heavier from May to July. Snow is frequent, though light, in winter. The lowest temperature on record is −42.9 °C (−45.2 °F), recorded in 1938, and the highest temperature is 40.2 °C (104.4 °F), recorded in 2002.[9]

Karaganda is an industrial city, built to exploit nearby coal mines using the slave work of prisoners of labour camps. Flora Leipman, a British[discuss] citizen, spent several years unlawfully detained in a number of other nearby camps, and described her experiences in the book "The Long Journey Home" (published 1987). Commercial extraction of coal continues to be an important activity in the region even today.

Since local water resources are not sufficient for the needs of a major industrial city, the Irtysh–Karaganda Canal was constructed in the 1960s, to supply the Karaganda metropolitan area with water from the Irtysh River more than 400 km away.

The city is the seat of the Roman Catholic Diocese of Karaganda.

The Miners Palace of Culture is a major landmark in Karaganda.

FC Shakhter Karagandy is a football club based in Shakhtyor Stadium. They are the current champions of the Kazakhstan Premier League. The local football club has its own heroes and big accomplishments. The most popular player in the team is Andrey Finonchenko. The biggest accomplishment is a victory against Celtic from Scotland. The score was 2–0. The city participated in the open Kazakh Cup in bandy 2009.[11] Saryarka Karagandy is an ice hockey team that plays in the Russian-based Supreme Hockey League (VHL) The popularity of winter sports is growing each year and multi-sports winter games are organised for the Qaraghandy Region.[12]

Karaganda was often used as the punchline in a popular joke in the former Soviet Union. Karaganda is fairly isolated in a vast area of uninhabited steppe, and is thought by many to be "the middle of nowhere". When used in the locative case (Караганде), the final syllable rhymes with the Russian word for "where" (где), as well as with a Russian obscenity used to answer to an unwanted question "Where?". Thus the exchange: "Где?" — "В Караганде!" ("Where is it?" — "In Karaganda!")

Sary-Arka Airport is 20 kilometers south-east of the city.