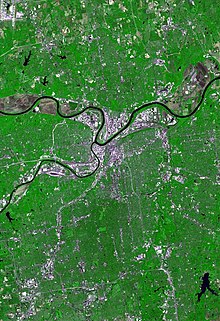 The larger Kansas City Metropolitan Area as seen on a map can be visualized roughly as four quadrants:

"Downtown" almost always refers to downtown Kansas City, Missouri which has a population of 25,204.[2] Downtown is Kansas City's historic center, located entirely within Kansas City, Missouri, and contains the city's original town site, business districts, and residential neighborhoods. Downtown is bounded by the Missouri River on the north, the Missouri-Kansas state line on the west, 31st Street on the south and Woodland Avenue on the east. The downtown area includes the Central Business District and its buildings, which form the city's skyline. The Downtown Loop is formed by Interstates 670, 70 and 35. Within the downtown loop are many of the tall buildings and skyscrapers that make up the city's skyline. The downtown loop also has small, distinct neighborhoods such as Quality Hill, the Garment District, the Financial District, the Convention Center District, and the Power and Light District.

Other neighborhoods within downtown are the River Market and Columbus Park, both located between the downtown loop and the Missouri River. Between the downtown loop and the state line are the Westside neighborhood and the West Bottoms, located at the bottom of the bluff adjacent to Kaw Point. East of the loop are the 18th & Vine District, the North Bottoms, and Northeast Kansas City (the East Bottoms, Northeast, and Pendleton Heights). South of the loop is the Crossroads District, Union Hill, Crown Center, Hospital Hill, Longfellow, Wendell Phillips, and Washington Wheatley.

The Kansas City Convention Center, Municipal Auditorium, City Hall, Lyric Theater, Midland Theatre, Ilus Davis Park, and Barney Allis Plaza are within the Central Business District inside the downtown loop. The T-Mobile Center and the College Basketball Experience are within the Power & Light District, also within the downtown loop. The Kauffman Center for the Performing Arts is perched upon a high point immediately south of the downtown loop. South of the loop is the Crossroads District, Union Station, Crown Center, the National World War I Museum, Liberty Memorial, Penn Valley Park, Truman Medical Center, Children's Mercy Hospital, and the 18th & Vine District. North of the loop are City Market within the River Market and Richard L. Berkeley Riverfront Park. West of the loop within the West Bottoms are Hy-Vee Arena and Hale Arena.

Midtown/Plaza is entirely within Kansas City, Missouri with a population of 40,355.[3] It is just south of downtown, and bounded by 31st Street on the north, the state line on the west, West Gregory Boulevard (71st Street) on the south, and Troost Avenue on the east. Midtown/Plaza, the core of the metropolitan area, has many cultural attractions, shopping and entertainment areas, large hospitals, universities, and the metro area's most densely populated neighborhoods.

Midtown/Plaza has many distinct and historic neighborhoods, including Westport, Hyde Park, and Southmoreland. Shopping is centered on the Country Club Plaza, which has luxury retailers, hotels, and restaurants. Brookside and Westport also contain smaller-scale, neighborhood-oriented, and niche-market retailers. Midtown is home to Saint Luke's Hospital and Research Medical Center. Cultural attractions include the Nelson-Atkins Museum of Art, Kemper Museum of Contemporary Art, Uptown Theater, Starlight Theater, the Kansas City Zoo, Loose Park, and Swope Park. The last of these has a soccer complex that is home to the Swope Park Rangers, a USL Championship team that is the official reserve side for the area's Major League Soccer club, Sporting Kansas City. Major educational institutions include the University of Missouri–Kansas City, Rockhurst University, Kansas City Art Institute, Stowers Institute for Medical Research, Midwest Research Institute, and Penn Valley Community College.

East Side of the Metro is primarily eastern Jackson County which is an area of the Kansas City Metro that contains the far-eastern urban side of Kansas City, Missouri and the following large suburbs of Blue Springs, Independence, and Lee's Summit. Also included in this area is western Lafayette County Missouri and the far northeast portion of Cass County Missouri. The East Side of Metro includes the following Missouri suburbs of Independence, Blue Springs, Raytown, Lees Summit, Grain Valley, Oak Grove, Sugar Creek, River Bend, Lake Lotawana, Lone Jack, Greenwood, Unity Village, Buckner, Pleasant Hill, Bates City, Odessa, and Lake Tapawingo. Arrowhead Stadium, home of the NFL's Kansas City Chiefs and Kauffman Stadium, home of the MLB's Kansas City Royals are on the eastern edge of Kansas City. The Cable Dahmer Arena home of the ECHL's Kansas City Mavericks and the MASL's Kansas City Comets is in Independence.

The Northland is the area north of the Missouri River, bordered by the Kansas state line on the west and Missouri Highway 291 on the east. The southern half of Platte County, and much of Clay County make up the area. The economy of the Northland is dominated by Cerner, Kansas City International Airport, Ford Kansas City Assembly Plant, the Zona Rosa shopping community and three riverboat casinos. The metro area's largest amusement park, Worlds of Fun and Oceans of Fun, is in the Northland. Major educational institutions in the Northland include Park University, William Jewell College, and the Maple Woods campus of Metropolitan Community College. Communities of the Northland outside the city limits include Parkville, Kearney, Liberty, Platte City, Gladstone, Riverside, Smithville, North Kansas City, and Weatherby Lake.

Wyandotte County has a population of 165,334 and contains Kansas City, Kansas, which is locally called "KCK" to distinguish it from the larger Kansas City, Missouri (KCMO).[5] It contains many residential neighborhoods, the Fairfax Industrial District, and the Village West entertainment district. The General Motors Fairfax Assembly Plant is in the Fairfax Industrial District. Village West contains many area attractions. This includes many sporting venues such as Children's Mercy Park, home of the area MLS soccer team Sporting Kansas City, the Kansas Speedway, which hosts many NASCAR races, and T-Bones Stadium, home of the independent baseball team, the Kansas City T-Bones. Other Village West attractions include the Legends shopping district, the Providence Medical Center Amphitheater, and Schlitterbahn Waterpark.

Cass County, Missouri has a population of 104,954 and contains parts of “South Kansas City", this area consists of the most southern part of Kansas City, Missouri, as well as the suburbs of Harrisonville, Belton, Loch Lloyd, Peculiar and Raymore.[6]

Has a population of 81,352 and contains the cities of Leavenworth and Lansing along with the Leavenworth state Penitentiary.[7]

Municipalities with fewer than 5,000 inhabitants

This is ranking of violent crime by county, from highest to lowest:[31]

The Kansas City area is a confluence of four major U.S. interstate highways:

Other interstates that cross through the area include:

Kansas highways in the area include:

Missouri highways in the area include:

These are other notable roads in the area:

The Kansas City metropolitan area is served by several airports. It is primarily served by Kansas City International Airport, 15 miles northwest of downtown Kansas City, Missouri, was built to serve as a world hub for the supersonic transport and Boeing 747. The airport's gates were positioned 100 feet (30 m) from the street; however, since the September 11, 2001 attacks, these have undergone expensive overhauls, retrofitting it to incorporate elements of conventional security systems.

The much smaller Charles B. Wheeler Downtown Airport, to the immediate north of downtown near the Missouri River, was the original headquarters of Trans World Airlines (TWA) and houses the Airline History Museum. It served as the area's major airport until 1972, when Kansas City International (then known as Mid-Continent International Airport and was home to an Overhaul Base for TWA) became the primary airport for the metropolitan area after undergoing $150 million in upgrades that were approved by voters in a 1966 bond issue. Downtown Airport is still used to this day for general aviation and airshows.

There are two general aviation airports in Johnson County, Kansas. New Century AirCenter borders southwest Olathe and northeast Gardner. The primary runway at New Century AirCenter is the second longest runway in the region next to those at Kansas City International Airport. It is 7 miles from the Logistics Park Kansas City Intermodal Facility. The other airport, Johnson County Executive Airport has one runway on 500 acres and is the fourth busiest towered airport in the state of Kansas.

There are no commuter rail services.

The Kansas City Downtown Streetcar is a 2.2-mile modern streetcar line in downtown Kansas City, Missouri. Opened to the public in May 2016, it is maintained and operated by the Kansas City Streetcar Authority, a non-profit corporation made up of private sector stakeholders and city appointees. A ballot initiative to fund construction of the $102 million line was approved by voters on December 12, 2012.[34] The system runs between River Market and Union Station, mostly along Main Street, with extensions north and south under consideration.[35]

The Missouri side of the metropolitan area south of the Missouri River shares a grid system with Johnson County on the Kansas side. Most east-west streets are numbered and most north-south streets named. Addresses on east-west streets are numbered from Main Street in Kansas City, Missouri, and on north-south streets from St. John Avenue (or the Missouri River, in the River Market area). The direction 'South' in street and address numbers is generally implied if 'North' is not specified, except for numbered 'avenues' in North Kansas City. In the northland, east-west streets use the prefix N.E. or N.W., depending on the side of N. Main on which they lie.

Areas of the metropolitan area

The center of Kansas City is roughly contained inside the downtown loop (shaded in red).

Top 5 largest colleges by total enrollment (within the MSA) [41]

The Kansas City Kansan serves Wyandotte County, having moved from print to an online format in 2009. Additional weekly papers in the metropolitan area include the Liberty Tribune, Sun Newspapers of Johnson County, The Examiner in Independence and eastern Jackson County, The Pitch, and the Kansas-Missouri Sentinel. The area is also served by two newspapers focused the area's faith-based population: The Metro Voice Christian Newspaper and the Jewish Chronicle. The city's Hispanic and Latino American community is served by Dos Mundos, a bilingual newspaper with articles in Spanish and English, and Mi Raza magazine, the area's only weekly Hispanic publication printed in Spanish. The Kansas City Call serves the African American community publishing its paper weekly.

According to Arbitron, about 1.5 million people over the age of 12 live within the Kansas City DMA, making it the 30th largest market for radio and 31st for television according to Nielsen. The Kansas City television and radio markets cover 32 counties encompassing northwestern Missouri and northeast Kansas.

Television stations in the Kansas City metropolitan area, with all major network affiliates represented, include:

Over 30 FM and 20 AM radio stations broadcast in the Kansas City area, with stations from Topeka, St. Joseph and Carrollton also reaching into the metropolitan area. The highest-rated radio stations, according to Arbitron are:

Hispanics, who account for 8% of the market's population, are specifically served by three AM radio stations who broadcast in Spanish:

The Kansas City metropolitan area's largest private employer is Cerner Corporation.[44] Cerner, a global healthcare IT company which is headquartered in North Kansas City, employs nearly 10,000 people in the area with a total workforce of nearly 20,000 people including global employees. In August 2014, the company announced its acquisition of competitor Siemens Healthcare, which, if approved, will further increase Cerner's total number of employees.[45] Cerner has several campuses across the area with its World Headquarters building in North Kansas City, Innovations Campus in South Kansas City, and Continuous Campus in the Kansas City, Kansas area.

The following companies and organizations, excluding educational institutions, are among the larger ones that are headquartered in or have since relocated from the metropolitan area (headquarters of most companies are located in Kansas City, Missouri, unless otherwise noted):

The Kansas City Federal Reserve Bank is one of twelve such banks located in the United States.

The USDA provides estimates of the number of trees by county in the Kansas City metropolitan area.[46]