Kana (仮名, Japanese pronunciation: [kana]) are the syllabaries that form parts of the Japanese writing system, contrasted with the logographic Chinese characters known in Japan as kanji (漢字). The modern Japanese writing system makes use of two syllabaries: cursive hiragana (ひらがな)[2] and angular katakana (カタカナ). Also classified as kana is the ancient syllabic use of kanji known as man'yōgana (万葉仮名), which was ancestral to both hiragana and katakana. Hentaigana (変体仮名, "variant kana") are historical variants of modern standard hiragana. In modern Japanese, hiragana and katakana have directly corresponding sets of characters representing the same series of sounds.

Katakana, with a few additions, are also used to write Ainu. Taiwanese kana were used in Taiwanese Hokkien as glosses (furigana) for Chinese characters in Taiwan under Japanese rule.

Each kana character (syllabogram) corresponds to one sound in the Japanese language, unlike kanji regular script corresponding to meaning (logogram). That is why the character system is named kana, literally "false name". Apart from the five vowels, this is always CV (consonant onset with vowel nucleus), such as ka, ki, etc., or V (vowel), such as a, i, etc., with the sole exception of the C grapheme for nasal codas usually romanised as n. This structure has led some scholars to label the system moraic instead of syllabic, because it requires the combination of two syllabograms to represent a CVC syllable with coda (i.e. CVn, CVm, CVng), a CVV syllable with complex nucleus (i.e. multiple or expressively long vowels), or a CCV syllable with complex onset (i.e. including a glide, CyV, CwV).

Due to the limited number of phonemes in Japanese, as well as the relatively rigid syllable structure, the kana system is a very accurate representation of spoken Japanese.

The following table reads, in gojūon order, as a, i, u, e, o (down first column), then ka, ki, ku, ke, ko (down second column), and so on. n appears on its own at the end. Asterisks mark unused combinations.

Syllables beginning with palatalized consonants are spelled with one of the seven consonantal kana from the i row followed by small ya, yu or yo. These digraphs are called yōon.

Hiragana is used to write native Japanese words with no kanji representation (or whose kanji is thought obscure or difficult), as well as grammatical elements such as particles and inflections (okurigana).

Today katakana is most commonly used to write words of foreign origin that do not have kanji representations, as well as foreign personal and place names. Katakana is also used to represent onomatopoeia and interjections, emphasis, technical and scientific terms, transcriptions of the Sino-Japanese readings of kanji, and some corporate branding.

Kana can be written in small form above or next to lesser-known kanji in order to show pronunciation; this is called furigana. Furigana is used most widely in children's or learners' books. Literature for young children who do not yet know kanji may dispense with it altogether and instead use hiragana combined with spaces. 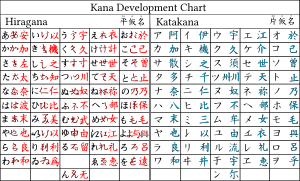 Development of hiragana and katakana

The first kana was a system called man'yōgana, a set of kanji used solely for their phonetic values, much as Chinese uses characters for their phonetic values in foreign loanwords (especially proper nouns) today. Man'yōshū, a poetry anthology assembled in 759, is written in this early script. Hiragana developed as a distinct script from cursive man'yōgana, whereas katakana developed from abbreviated parts of regular script man'yōgana as a glossing system to add readings or explanations to Buddhist sutras.

Kana is traditionally said to have been invented by the Buddhist priest Kūkai in the ninth century. Kūkai certainly brought the Siddhaṃ script of India home on his return from China in 806; his interest in the sacred aspects of speech and writing led him to the conclusion that Japanese would be better represented by a phonetic alphabet than by the kanji which had been used up to that point. The modern arrangement of kana reflects that of Siddhaṃ, but the traditional iroha arrangement follows a poem which uses each kana once.

Kana are the basis for collation in Japanese. They are taken in the order given by the gojūon (あ い う え お ... わ を ん), though iroha (い ろ は に ほ へ と ... せ す (ん)) ordering is used for enumeration in some circumstances. Dictionaries differ in the sequence order for long/short vowel distinction, small tsu and diacritics. As Japanese does not use word spaces (except as a tool for children), there can be no word-by-word collation; all collation is kana-by-kana.

Characters U+3095 and U+3096 are hiragana small ka and small ke, respectively. U+30F5 and U+30F6 are their katakana equivalents. Characters U+3099 and U+309A are combining dakuten and handakuten, which correspond to the spacing characters U+309B and U+309C. U+309D is the hiragana iteration mark, used to repeat a previous hiragana. U+309E is the voiced hiragana iteration mark, which stands in for the previous hiragana but with the consonant voiced (k becomes g, h becomes b, etc.). U+30FD and U+30FE are the katakana iteration marks. U+309F is a ligature of yori (より) sometimes used in vertical writing. U+30FF is a ligature of koto (コト), also found in vertical writing.

Additionally, there are halfwidth equivalents to the standard fullwidth katakana. These are encoded within the Halfwidth and Fullwidth Forms block (U+FF00–U+FFEF), starting at U+FF65 and ending at U+FF9F (characters U+FF61–U+FF64 are halfwidth punctuation marks):