Space photo showing the city of Kallithea (bordered with white dotted line), its location next to the Athens centre (to the right) and the Phaleron Bay (to the left), as well as the local layout of the metropolitan urban railway (cyan line) and its stations (yellow circles). Click box right to enlarge

The center of Kallithea (Davaki Square) lies at a distance of 3 km (2 miles) to the south of the Athens city center (Syntagma Square) and 3 km (2 mi) to the north-east of the Piraeus (photo 1). Kallithea extends from the Filopappou and Sikelia hills in the north to Phaleron Bay in the south ; its two other sides consist of Syngrou Avenue to the east (border to the towns of Nea Smyrni and Palaio Faliro), and the Ilisos River to the west (border to the towns of Tavros and Moschato) (photo 2).

The site on which the city was developed covers the biggest part of the area to the south of Athens city center, protected in ancient times (5th century BC) by the Long Walls to the west and the Phalerum Wall to the east (photo 3). Somewhere within this area the ancient town of Xypete lay. The town and its citizens are mentioned, among other places, in Plato's Dialogs.

The plans for the establishment of the new city of Kallithea were officially approved in December 1884. On the longitudinal axis of the town (Thiseos Avenue), the Athens to Phaleron tramway once ran, from the beginning (1850) to (1955) and the end of its operations. Near the center of the town the Shooting Range (Skopeftirion) was built to house events of the first modern Olympic Games, the 1896 Summer Olympics, and these first modern games took place in three venues: the refurbished ancient stadium of Athens (Panathinaiko Stadium) 2 km (1 mi) NE of Kallithea, the Neo Phaliron Velodrome (currently Karaiskaki Stadium) 2 km (1 mi) SW of Kallithea, and the Kallithea Shooting Range (Skopeftirion).[3]

Events of the Athens 2004 Olympic Games were also sited in the district of Kallithea, notably handball and Taekwondo in the new Sports Pavilion (Faliro) by the bottom of Syngrou Avenue, and beach volleyball in the Olympic Beach Volleyball Center on Kallithea Bay (Tzitzifies).

Between the first modern games (1896) and the recent (2004) Olympic Games in the city, Kallithea grew significantly. Initially the tramway depot and workshop were built here in 1910, followed by the Harokopios Graduate School (1925) and the Panteios Graduate School of Political Sciences (1928).

A few had arrived earlier (1919) from the north and east (Russian) coasts of the Black Sea, from places such as Odessos (Odessa), Marioupolis (Mariupol', the Sea of Azov) and elsewhere, after the failed attempt of the western allies (Greece included) against the young Bolshevik state during the Russian Civil War.

Black Sea immigrants of Greek origin also settled in Kallithea in the 1930s, as a result of the change of Soviet policy toward ethnic groups. Their origins were mainly in the east coast of the Black Sea (Batumi, Sukhumi, Novorossiysk, Anapa etc.)

The first refugees settled originally near the site of the first Olympic shooting range (1896), until they were gradually transferred to new dwellings. After its evacuation the building bound with the shooting range served as a school, until the Nazi Occupation of 1941, when it was converted to a prison. The prison of Kallithea was demolished in 1966 ;among others, fighters of the Greek Resistance and victims of the Greek Civil War had been jailed there, such as Nikos Beloyannis.

In the 1990s, after the dissolution of the Soviet Union, a new wave of Greek immigrants arrived in Kallithea from the east coast of the Black Sea, from the Caucasus highlands in Georgia, as well as from distant Greek settlements in Kazakhstan and Uzbekistan where their Black Sea Greek ancestors were expelled during Joseph Stalin's regime in the 1930s.

Kallithea houses two universities (Harokopio University and Panteion University). An even more notable school in Kallithea is Sivitanidios School, one of the oldest technical school in Greece.

Until 2004, south Kallithea (Tzitzifies) housed the only horse track in Greece (Ippodromos - Hippodrome), which later moved to Markopoulon, near Eleftherios Venizelos Airport. Kallithea houses numerous cultural associations and several sport clubs, the most well known of which are Kallithea FC (soccer), Esperos (basketball, volleyball, handball, and also soccer in an earlier period) and Ikaros Kallitheas, a multisport club founded in 1991, originally as Ikaros Nea Smyrni.[4] Kallithea had another important club, Esperides Kallithea with many titles in women basketball. This club merged to Ikaros Kallithea in 2012.[5] 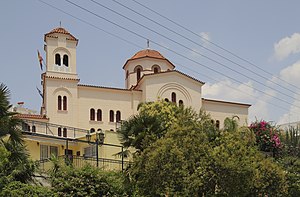