Kaduna is the state capital of Kaduna State in north-western Nigeria, on the Kaduna River. It is a trade centre and a major transportation hub for the surrounding agricultural areas, with its rail and road junction. The population of Kaduna was at 760,084 as of the 2006 Nigerian census.

Rapid urbanisation since 2005 has created an increasingly large population, now estimated to be around 1.3 million. Kaduna's name derives from the Hausa word kada, for crocodile (kaduna being the plural form).[2]

The etymology of the word Kaduna is said to be a corruption of the Hausa word for “crocodiles”, Kadduna in the Hausa language.[3] Another version of the name proposes a link to the Gbagyi word/name 'Odna', meaning 'river'.[4]

Kaduna was founded by British colonists in 1900.[5] It became the capital of Nigeria's former Northern Region in 1917,[6] and retained this status until 1967. The first British governor of Northern Nigeria, Sir Frederick Lugard, chose the present site for development due to its proximity to the Lagos-Kano Railway.[7]

Kaduna is popularly known as the center of learning, as evident from the numerous educational institutions located in the state. Tertiary Institutions in Kaduna city include:

The city is served by Kaduna International Airport.

Kaduna is an important junction on Nigeria's Cape gauge railway network. At Kaduna, a branch line connects the Lagos–Nguru Railway to the Port Harcourt–Maidugur Railway.

Kaduna is also on the route of the planned Lagos–Kano Standard Gauge Railway, which has been completed between the national capital of Abuja and Kaduna. Trains for Abuja depart from the Rigasa Railway Station in Kaduna.[10]

There is a large racecourse named Murtala Mohammed Square, approximately 1.6 kilometres (1 mi) round, inside which is found the Kaduna Polo Club. Kaduna Golf Club is also located within the Kaduna CBD. Other Sports facilities include the Ahmadu Bello Stadium and Ranchers Bees Stadium. 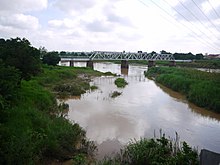 Kaduna is an industrial centre of Northern Nigeria and the Middle Belt, manufacturing products like textiles, machinery, steel, aluminium, petroleum products and bearings. However, the textile industry has been declining because of factory closings due to neglect during military rule and competition with Chinese imports. Other light manufactures include: plastics, pharmaceuticals, leather goods, furniture, and televisions.[7] Agriculture is also a major industry in Kaduna, and as such, the Bank of Agriculture has its headquarters in the city.[11] Some of the main agricultural exports include: cotton, peanuts, sorghum, and ginger.[12]

Pottery is highly prized from Kaduna, especially from the Nok culture.

Kaduna Refining and Petrochemical Company (KRPC), one of Nigeria's four main oil refineries is located in Kaduna. It is supplied by a pipeline from the Niger Delta oil fields.[7][14]

A 2009 World Bank survey states that Kaduna is one of the top six cities with the highest unemployment. 20% of the population is estimated to be unemployed.[2]

Kaduna has a large market, recently rebuilt after an extensive fire in the mid-1990s.

Kaduna also has a branch of the Nigerian Stock Exchange.[7]

Kaduna has an inland dry port[15]