On June 20, 2016, at around 0600 AFT, a suicide bombing attack claimed to be conducted by the Taliban or the Islamic State of Iraq and the Levant hit a convoy of Canadian embassy security guards en route to the embassy in Kabul.[1] The attack took place in the ninth police district in the Benayi area, Kabul, Afghanistan. The victims were Nepalese contractors, with some sources claiming that there were also Afghan contractors, and other sources claiming that the Afghan nationals were not security contractors and were instead nearby.[2] Other sources also claimed that there were two Indian guards among the dead.[1] Many civilians at a nearby market were among the nine people injured in the blast, some seriously. The attack occurred during the holy month of Ramadan. The incident sparked debates on the presence of foreign workers in conflict-countries, with many criticising the Canadian government for negligence. There have been debates on this subject before, especially after the Nisour Square massacre, a very different situation.

The attack was another in a series of attacks on security guards and government workers conducted by the Taliban that occurred in the last couple of months before the attack. The attack also occurred during the Kunduz-Takhar highway hostage crisis.

The security guards were travelling on a mini bus that was on its way to the Canadian embassy. They were in the capital, Kabul, travelling through early-morning traffic when a suicide bomber who was inside a compound approached the minibus, which at that time was travelling through a market where several civilians were shopping. The bomber noticed the foreign vehicle and approached it on foot, after putting on a suicide belt. The suicide bomber then blew himself up with an unknown device at the minibus. The blast blew the windows out of the vehicle and left blood stains on the outside of the bus. The blast also injured many civilians who were at the market that the minibus was travelling through. Witnesses described seeing multiple people dead and injured. The injured were rescued from the mangled vehicle.[2] Everyone actually located at the embassy were safe.

The nationalities of the victims and the number of victims varies from source to source. Most sources agree that the nine injured included five Nepalese employees and four Afghan civilians. Some sources claim that there were "at least 14 Nepalese security contractors killed". Other sources claim that Afghan security contractors were among those killed.[2] Some sources claim that 13 Nepalese guards were killed alongside two Indian guards.[5] The Nepalese Ministry of Foreign Affairs stated that 12 Nepali nationals were killed, and seven Nepalese were injured.[6] The Canadian foreign minister said that Nepalese, Indian and Afghan nationals were among the victims.[7] A survivor of the blast, Amrit Rokaya Chhetri, told an interviewer that he is going home.[8] The suicide bomber was killed.

Chyangwa Tamang, who was injured, succumbed to his wounds.[9]

After that attack occurred, Taliban spokesman Zabiullah Mujahid claimed that the attack was carried out by "the fighters of the Taliban" and that "over 20 people were killed or wounded in the attack". The spokesman said that the attack was retaliation for an execution a month before the attack of six Taliban prisoners. The Taliban named the bomber as "Irfanullah Ahmad". However, the Islamic State of Iraq and the Levant also claimed responsibility for the attack, naming the attacker as "Erfanullah Ahmed".[1][8]

Nepal paid a compensation of $12,000 to members of the families of the dead. Many Nepalese politicians and government officials expressed deep anger over the attack, as the majority of the victims were Nepalese citizens. They criticised Canadian diplomats of negligence for "shuttling (Nepalese guards) back and forth in one of the most dangerous cities in the world in an unprotected minibus". Many Nepalese diplomats went to Canada's capital city, Ottawa, to discuss the attack. Meetings between diplomats included a meeting between Kali Prasad Pokhrel, the Nepal Ambassador to Canada, and Nadir Patel the Canadian High Commissioner to India.[13]

"We have conveyed Nepal's concern to the Government of Canada and sought information on under what circumstances those Nepalese security guards were attacked at a time they were ferried to and from their work at the Canadian diplomatic facilities. We also requested to ensure the safety and security of Nepalese still working with the Canadian Embassy." 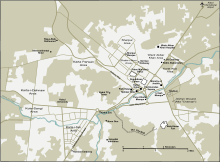 A map of roads leading to the area in Kabul where the Canadian embassy is located. Also located in the area are important diplomatic offices and other foreign embassies.

Many people in Nepal, such as prominent lawmakers, expressed their viewpoint on the situation while questioning why westerners in Afghanistan are very heavily protected, but the people who guard them and are hired to guard them are not protected. Other members of the public criticised the ways that guards are transferred to and from buildings such as embassies. The incident sparked debate about how security guards should be moved. Many mentioned that it would be more reasonable to transfer guards around in armoured vehicles instead of other vehicles such as minibuses. The incident also sparked debate on the presence of Nepali migrant workers in "unsafe" destinations, such as Afghanistan. Members of the public asked foreign embassies, such as Canada's, to stop hiring Nepalese citizens and "putting them at risk".

Global Affairs Canada responded by saying that the contractors were hired from Sabre International, a private security firm.[5] Major Isabelle Bresse, a spokeswomen in the Canadian Forces, replied by saying that only a limited number of Canadian military personnel provide security at the Canadian embassy, and it will stay that way. For security reasons she did not mention much about the guards at the embassy. It was also mentioned that the foreign guards at the embassy get paid around $1,000 per month, or $40 a day, and many are the only wage earners for their families.[5]

After much debating within the country, the Nepali government asked the Canadian government to ensure the safety and security of Nepali nationals who are still working with Canadian diplomatic facilities in Afghanistan, which they called "war-torn". The Ambassador of Nepal to Canada expressed concern of the "unsecure" ways that Nepalese workers are transported to the embassy, such as in a minibus without any security escort. He then asked Canadian authorities if they could "conduct a thorough investigation into the incident and share the findings". He also asked the Canadian government to provide financial support to the injured and the members of the deceased's families, saying it is their "moral responsibility".[13]

Families of the deceased also expressed anger towards the Canadian government, as they said that they felt they had been left "high and dry". Their questions on the lack of security for the transportation of the victims across the city have not been answered. Anger was also expressed to the Canadian diplomats in Afghanistan, who's transports always contain a convoy with a large amount of security, unlike the foreign guards who are transported. Private security companies are known to hire workers from developing nations, and this has sparked much controversy. Many people also voiced that they believed that guards working at Canadian embassies should always have protection, as this is what they do at American embassies.[15] Distressed ex-foreign workers at the embassy mentioned a rule that they can only carry weapons when inside the Canadian embassy during duty hours, making them prone to attacks outside of the embassy, where they cannot defend themselves.[16]

Nepali workers in Afghanistan started to return home as disputes arose from the terror attack. So far, 40 people have returned, many on the same flight. They quit their jobs before flying home.[17] Sabre International assured employees that they would facilitate the return of Nepali's workers to their home country. The private security firm was also asked to provide compensation. The Prime Minister of Nepal, believing that this would downplay the government's initiative, instead claimed that he had his government bring home the dead and injured at its own expenses, without help from the private security firm. He claimed that Nepal's government would instead fund the treatment of those injured in the attack, and some are currently being treated in India and Afghanistan. The government then sent a Nepal Airlines flight to Afghanistan to pick up the dead, injured, and other workers and transport them back to Nepal.[12] The Prime Minister then pledged ₹1 million (which he claimed was not part of the insurance money that may later be received) to give to families of the dead.

After these Nepal contractors returned home, Nepal subsequently banned its citizens from migrating and working in Afghanistan, Iraq, Libya and Syria, said by Nepal's Labour Minister Deepak Bohara. The parliament ordered the prime minister to crack down on traffickers, who may send thousands of migrants per year to other nations experiencing major conflicts. These migrants can often be exploited.[18]

On 8 July 2016, a monument was constructed and a memorial was held for those killed in the attack. The monument was constructed at the Canadian Embassy in Kabul, and was unveiled by Canadian Ambassador Deborah Lyons, the Indian Ambassador Manpreet Vohra, and the Gurkha Force Commander. No representative from the Nepalese government was present at the memorial.[9] Two days after the memorial, Nepal, were many were still angry at the lack of an investigation, sent a team to investigate and assess the security of the green zones.[19]

A Nepali contractor returned home after the attack. He claimed that the attack took place because the Taliban asked for money from Sabre International. He believed that the Taliban warned that they would eliminate the Nepali guards in case they failed to receive the money from the private security firm. He said that "they targeted us because the company refused to give money and took their warnings very lightly".[13]