Kavalam Madhava Panikkar (3 June 1895 – 10 December 1963)[1][2] was an Indian statesman and diplomat. He was also a professor, newspaper editor, historian and novelist. [3] He was born in Travancore, then a princely state in the British Indian Empire and was educated in Madras and at the University of Oxford.

After a stint as professor at Aligarh Muslim University and later at University of Calcutta, he became editor of Hindustan Times in 1925. Later, he was appointed Secretary to the Chamber of Princes, whence he moved to Patiala State and then to Bikaner State as Foreign Minister and later became the latter's Prime Minister. When India achieved political independence, Sardar Madhava Panikkar represented the country at the 1947 session of the UN General Assembly. In 1950, he was appointed Ambassador of India (the first non-Socialist country to recognise People's Republic of China) to China. After a successful tenure there, he went as Ambassador to Egypt in 1952. He was appointed a member of the States Reorganisation Commission set up in 1953. He was also India's Ambassador to France and a member of Rajya Sabha, the upper house of the Indian parliament. He also served as Vice-Chancellor of the University of Kashmir and the University of Mysore.

Madhava Panikkar was born to Puthillathu Parameswaran Namboodiri and Chalayil Kunjikutti Kunjamma[4] in the princely state of Travancore in 1895. He completed his basic studies at CMS College School, Kottayam and St. Paul's School, Vepery, Madras. Later on he joined Madras Christian College for intermediate classes. At MCC he was a contemporary of Puthezhath Raman Menon, Nandyelath Padmanabha Menon and Sadasiva Reddy among others. He left for England in April 1914 to read history at Christ Church, University of Oxford. After leaving Oxford, Panikkar read for the bar at the Middle Temple, London. 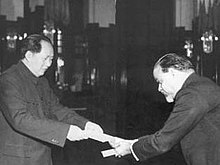 He was the first president of the Kerala Sahitya Academy. After his studies, Panikkar travelled to Portugal and Holland to research the involvement of these countries with Malabar, the results of which were published in the books Malabar and the Portuguese (1929) and Malabar and the Dutch (1931).

[5] He was the maternal uncle of the noted poet, dramatist and lyricist Kavalam Narayana Panicker.

On returning to India, he first taught at the Aligarh Muslim University and later at the University of Calcutta. He turned to journalism in 1925 as editor of the Hindustan Times.

For the next 20 years, Madhava Panikkar served the Princely States, becoming secretary to the chancellor of the Chamber of Princes. He also served as the foreign minister of the state of Patiala and as foreign minister of Bikaner, and became the dewan of Bikaner in 1944. He served in China until 1952, building a relationship with Chiang Kai-shek, and remaining there through the Communist takeover in 1949 and the following period. He wrote of his experiences in the book In Two Chinas (1955). This period also saw the completion of his work Asia and Western Dominance (1953). He subsequently served as ambassador to Egypt (1952–1953), and France (1956–1959), before a severe stroke forced him to return to India. On recovering, he took up his academic career again, becoming Vice-Chancellor of Jammu and Kashmir University and later of Mysore University. During his political career Panikkar continued to publish articles and poems, and also translated several Greek plays into Malayalam verse.

Early on Madhava Panikkar had cultivated an interest in Malayalam literature, and was a lifelong friend of the poet Vallathol Narayana Menon. He published scholarly works extensively and worked on ancient Indian history and more recent historical developments. Cambridge historian Arthur Hassall wrote that in his "long career as tutor of history at Christ Church" he had "never had a more brilliant student." Madhava Panikkar's interests stretched into diverse fields such as, art, notably novels, poetry and Kathakali and he wrote equally well in both Malayalam and English and published over 50 books and numerous articles.

Madhava Panikkar's interest in European influence on Asia was reflected in his studies of the Portuguese and the Dutch in Malabar (in South India) and especially in his Asia and Western Dominance (1953). In Two Chinas (1955) revealed his sympathy with Communist China.