Köniz (German pronunciation: [ˈkøːnɪt͡s]) is a statistical town, however considers itself still as a village, and a municipality in the Bern-Mittelland administrative district right on the southern border to Bern in the canton of Bern in Switzerland. The municipality of Köniz as a single settlement would belong to the 15 most populous towns in Switzerland. It is also part of the larger agglomeration of Bern of about 400,000 inhabitants.

The official language of Köniz is (the Swiss variety of Standard) German, but the main spoken language is the local variant of the Alemannic Swiss German dialect. 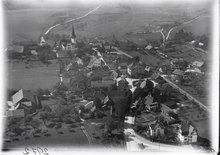 The current municipality has long been inhabited; there have been a number of Bronze- and Iron Age finds, as well as Roman villas (villae rusticae) and Early Middle Ages graveyards. The oldest parts of the current reformed parish church (formerly SS. Peter and Paul) date back to around 1100. There may have been other previous buildings on this site, but archaeological digs have uncovered no evidence of them thus far. Köniz is first mentioned in 1011 as Chunicis.[5]

According to legend the church was founded by Burgundian King Rudolph II and his wife Bertha. The parish did not only comprise the current municipality, but also the area around present day Bern, around 5 km away. In 1191 it became the parish church of the newly founded town, until it was given the status of its own parish in 1276.

There was an Augustinian monastery at the church, which was given to the Teutonic Knights by King Heinrich VII, the son and heir to the Holy Roman Emperor Friedrich II, in 1226. The order established a commendam at the church, which belonged to the Ballei of Schwaben-Elsass-Burgund, as well as a settlement in Bern. One of the friars was installed as parish priest. With the growth of the parish of Bern, the settlement there was raised to commendam status, whose principle was the parish priest in Bern.

The Köniz commendam was secularised in 1528 during the Bernese Reformation, but was given back to the Order in 1552 after pressure from the Catholic Cantons. In 1729 the Order sold the commendam to Bern. A bailiwick was established, which existed until the collapse of the old Bern in 1798. The municipality of Köniz in its present form, came into being in 1846.

Of the built up area, industrial buildings made up 1.2% of the total area while housing and buildings made up 10.7% and transportation infrastructure made up 4.8%. while parks, green belts and sports fields made up 1.1%. Out of the forested land, 29.5% of the total land area is heavily forested and 1.4% is covered with orchards or small clusters of trees. Of the agricultural land, 31.2% is used for growing crops and 18.0% is pastures, while 1.4% is used for orchards or vine crops. All the water in the municipality is flowing water.[7]

The municipality is located in the agglomeration of Bern. It stretches from the river Aare in the north-east to the rivers Schwarzwasser and Sense in the southeast. It consists of the village of Köniz and Wabern in the center, the garden towns of Liebefeld am Könizberg and Spiegel am Gurten as well as a number of other settlements including; Niederwangen, Oberwangen and Thörishaus in the Wangen valley as well as Schliern, Schwanden, Niederscherli and Oberscherli, Mittelhäusern und Gasel in the Upper Municipality.

The blazon of the municipal coat of arms is Argent a Cross Sable.[8]

The historical population is given in the following chart:[5][14]

The farm house at Herzwilstrasse 175, the Roman Era farmhouse at Chly-Wabere, the former commandry with castle, church and outbuildings, the Herrenstock, Hof Burren at Mengestorfbergstrasse 191, 193, the noble's wooden house and Villa Morillon are listed as Swiss heritage sites of national significance. The hamlets of Gurtendörfli, Herzwil, Liebewil and Mengestorf are all part of the Inventory of Swiss Heritage Sites.[15]

The Canton of Bern school system provides one year of non-obligatory Kindergarten, followed by six years of Primary school. This is followed by three years of obligatory lower Secondary school where the students are separated according to ability and aptitude. Following the lower Secondary students may attend additional schooling or they may enter an apprenticeship.[19]

As of 2000[update], there were 742 students in Köniz who came from another municipality, while 1,177 residents attended schools outside the municipality.[18]

There are eleven railway stations within the borders of the municipality: Niederwangen, Oberwangen, Thörishaus Station, and Thörishaus Dorf on the Lausanne–Bern line; Liebefeld, Köniz, Moos, Gasel, Niederscherli, and Mittelhäusern on the Bern–Schwarzenburg line; and Wabern bei Bern on the Gürbetal line between Bern and Belp. All are served by the Bern S-Bahn and have half-hourly or better service to various destinations.

In December 2003 the population of the villages that made up the municipality of Köniz had the following populations. Current populations will be similar.