Justo Rufino Barrios Auyón (July 19, 1835 – April 2, 1885) was a Guatemalan politician who was President of Guatemala from 1873 to 1885. He was known for his liberal reforms and his attempts to reunite Central America. 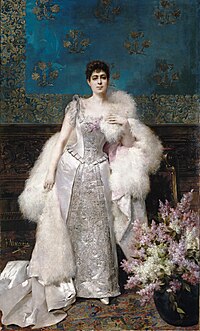 Francisca Aparicio y Auyón, 1892. Francisca was Barrios' wife. After his death, she left Guatemala for New York City, where she enjoyed the large inheritance her husband had left after his death.

Barrios was known from his youth for his intellect and energy, went to Guatemala City to study law, and became a lawyer in 1862.

In 1867, revolt broke out in western Guatemala, which many residents wished to return to its former status of an independent state as Los Altos. Barrios joined with the rebels in Quetzaltenango, and soon proved himself a capable military leader, and in time gained the rank of general in the rebel army.

In July 1871, Barrios, together with other generals and dissidents, issued the "Plan for the Fatherland" proposing to overthrow Guatemala's long entrenched Conservadora (conservative) administration; soon after, they succeeded in doing so, and General García Granados was declared president and Barrios commander of the armed forces. While Barrios was back in Quetzaltenago, García Granados was seen as weak by his own party members and was asked to call for elections, as the general consent was that Barrios would make a better president.[citation needed] Barrios was elected president in 1873.

Guatemalan National Penitentiary, built by Barrios to incarcerate and torture his political enemies.

The Conservative government in Honduras gave military backing to a group of Guatemalan Conservatives wishing to take back the government, so Barrios declared war on the Honduran government. At the same time, Barrios, together with President Luis Bogran of Honduras, declared an intention to reunify the old United Provinces of Central America.[clarification needed]

During his time in office, Barrios continued with the liberal reforms initiated by Miguel García Granados, but he was more aggressive in implementing them. A summary of his reforms is:[1]

Barrios had a National Congress totally pledged to his will, and therefore was able to enact a new constitution in 1879, which allowed him to be reelected as president for another six-year term.[1]

He also was intolerant with his political opponents, forcing many to flee the country and building the infamous Guatemalan Central penitentiary where he had numerous people incarcerated and tortured.[4]

Guatemala administrative structure during his tenure

Appleton's guide for México and Guatemala from 1884,[5] shows the twenty departments in which Guatemala was divided during Barrios' time in office:[6]

Barrios oversaw substantial cleaning and rebuilding of Guatemala City, and set up a new and accountable police force. He brought the first telegraph lines and railroads to the republic. He established a system of public schools in the country.

Guatemala territory during Rafael Carrera and Vicente Cerna conservative regimes. Soconusco territories were given to México in exchange for their support for the Liberal revolution in 1871 by Herrera-Mariscal treaty of 1882.

During Barrios' tenure, the "Indian land" that the conservative regime of Rafael Carrera had so strongly defended was confiscated and distributed among those officers who had helped him during the Liberal Revolution in 1871.[7] Decree # 170 (a.k.a. Census redemption decree) made it easy to confiscate those lands in favor of the army officers and the German settlers in Verapaz, as it allowed to publicly sell those common Indian lots.[8] Therefore, the fundamental characteristic of the productive system during Barrios' regime was the accumulation of large swaths of land among few owners[9] and a sort of "farmland servitude," based on the exploitation of the native day laborers.[8]

In order to ensure a steady supply of day laborers for the coffee plantations, which required many, Barrios' government decreed the Day Laborer regulations, labor legislation that placed the entire native population at the disposition of the new and traditional Guatemalan landlords, except the regular clergy, who were eventually expelled form the country and saw their properties confiscated.[7] This decree set the following for the native Guatemalans:

In 1879, a constitution was ratified for Guatemala. This was the Republic's first as an independent nation, as the old Conservador regime had ruled by decree. In 1880, Barrios was reelected President for a six-year term. Barrios unsuccessfully attempted to get the United States of America to mediate the disputed boundary between Guatemala and Mexico.

Guatemala, El Salvador, and Honduras agreed to re-form the Central American Union, but then Salvadoran President Rafael Zaldivar decided to withdraw, and sent envoys to Mexico to join in an alliance to overthrow Barrios. Mexican President Porfirio Díaz feared Barrios' liberal reforms and the potential of a strong Central America as a neighbor if Barrios' plans bore fruit. Díaz sent Mexican troops to seize the disputed land of Soconusco.

Painting of General Barrios' death in Chalchuapa on April 2, 1885. 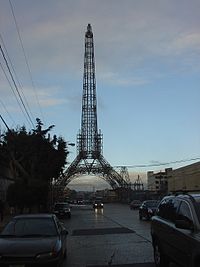 Reformador Tower, inaugurated on July 19, 1935 by the liberal regime of general Jorge Ubico Castañeda in celebration of Barrios Centennial.

Justo Rufino Barrios died during the Battle of Chalchuapa in El Salvador, as did his son, General Venancio Barrios, on April 2, 1885. The official liberal version is that Barrios was killed in action, alongside officer Adolfo V. Hall. However, some versions insist that a Guatemalan soldier missed a shot and killed president Barrios from behind[1] or that there might have been a murder plot.[citation needed]

Upon learning about his death, the Guatemalan Army panicked; officer José María Reyna Barrios, president Barrios' nephew, picked up the lifeless body of Venancio Barrios and organized the withdrawal of the Guatemalan battalions, while preparing the defense against a possible Salvadorian attack. Reyna Barrios, signing as Rosario Yerjabens,[d] told the story of what he saw, which does not match the official account: "The general in Chief, Justo Rufino Barrios, decided, about 8 a.m., to personally command the attack on the northeast side of "Casa Blanca"; and in order to accomplish that, he sent the Jirón Brigade, whose soldiers were all Jalapas.[e] These soldiers behaved in the most cowardly and disgraceful way. It is believed that they had been indoctrinated by some miserable traitor, one of those men without heart or conscience, one of those ungrateful people that was licking their benefactor's hand and abusing both his good heart and fortune. Unfortunately, a moment after the attack began, an enemy bullet wounded him mortally and he had to be taken off the battlefield. This sad occurrence was enough for some coward Jalapa soldiers who saw general Barrios dead, to leave their post and spread the sad news."[11]

On April 4, the defeated Guatemalan forces arrived in Guatemala City, where Reyna Barrios was promoted to general for his valiant battle services. 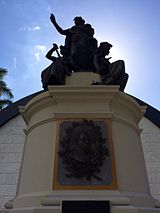 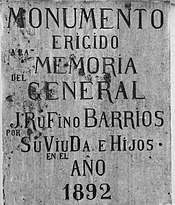 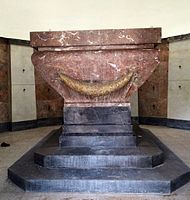 Today, his portrait is on the five quetzal bill in Guatemala, and the city and port of Puerto Barrios, capital of Izabal, bears his name.