The Juno Awards, more popularly known as the JUNOS, are awards presented annually to Canadian musical artists and bands to acknowledge their artistic and technical achievements in all aspects of music. New members of the Canadian Music Hall of Fame are also inducted as part of the awards ceremonies. The Juno Awards are often referred to as the Canadian equivalent of the Brit Awards in Great Britain or the Grammy Awards given in the United States.

Members of the Canadian Academy of Recording Arts and Sciences (CARAS), or a panel of experts, depending on the award, choose the award winners. However, sales figures are the sole basis for determining the winners of nine of the forty-two categories like Album of the Year or Artist of the Year. CARAS members determine the nominees for Single of the Year, Artist and Group of the Year. A judge vote by experts in the relevant genre, determines the nominees for the remaining categories. The names of the judges remain confidential. The judges represent all facets of the Canadian music industry. They are spread across the country and include of men and women, and speakers of both official languages (English and French). No person can judge the same category two years in a row.

In 1964 RPM magazine began polling its readers to determine which artists and groups they considered the best in Canada.[2][3] RPM announced the results of these polls each December.[4] There were no formal award ceremonies.

Record label owner Stan Klees met with RPM founder Walt Grealis to plan a formal music industry awards ceremony. Instead of merely publishing the award results in RPM, presentations would be made at a physical venue. The first ceremony was the Gold Leaf Awards which took place on 23 February 1970 in Toronto, Ontario.[5]

Later that year RPM invited its readers to suggest a new name for these awards. The name "Juneau" was submitted, in honour of Pierre Juneau, the first head of the CRTC. Juneau was instrumental in establishing Canadian content regulations for broadcasters to promote Canadian musicians.[3] That name became shortened to Juno and by 1971, the awards ceremonies were referred to as the "Juno Awards".[6]

From 1970 to 1973, RPM announced the winners before the awards night. From 1974, the award winners were not made public until the Juno ceremonies.[7] Music industry representatives formed an advisory committee for the Junos in 1974 which became the Canadian Music Awards Association the following year. This organisation assumed full management and operation of the Juno Awards from 1977 and became the Canadian Academy of Recording Arts and Sciences (CARAS).[4][8]

The Junos were first televised across Canada in 1975 on CBC Television.[9] Primary ceremonies continued to be broadcast on CBC until 2001, moving to CTV Television Network (CTV) in 2002. CBC broadcast the Juno Awards of 2018.[10]

The Canadian Music Hall of Fame was introduced in 1978. In 1979 the stauette's name was officially changed from RPM Annual Gold Leaf Award to Juno Award, and Canada's Prime Minister Pierre Trudeau was a presenter.[5]

Joni Mitchell was inducted into the Canadian Music Hall of Fame by Pierre Trudeau in 1982.[5]

Initially, the awards were presented during the early part of each year. In 1984, organisers postponed that year's awards until December. CARAS maintained a late-year scheduling until January 1988 when it noted the declining viewership of the Juno broadcasts and reverted to an early year awards schedule. CARAS postponed that year's Juno Awards until 12 March 1989, so there was no ceremony in the 1988 calendar year.[11]

In 1991, the awards were hosted in Vancouver, the first time the Juno ceremonies were conducted outside Toronto. That year also marked the introduction of a category for rap recordings.[12]

For the first time the 1995 Awards, held in Hamilton's Copps Coliseum, were open to the public. This marked the 25th Anniversary of the Junos.[5]

CARAS transferred the broadcast rights to the Juno Awards from CBC to CTV for the 2002 ceremonies. 2006 marked the first time the Junos were broadcast internationally through MTV2 in the United States and several affiliated MTV channels in other nations. The telecast of the 2006 Juno Awards was available to approximately 250 million people.[14]

The Allan Waters Humanitarian Award honouring media icon Allan Waters was inaugurated in 2006. The first artist to be given this honour was Bruce Cockburn.[15]

At the 2007 ceremony, host Nelly Furtado made Juno history by being the first nominee with multiple nominations to win every award for which she was nominated. These included the two most prestigious honours, Album of the Year and Artist of the Year.[16]

On 18 April 2017, CARAS president Allan Reid announced that the ceremonies would return to CBC for the first time since 2002, for at least the next six years. He said he wanted to collaborate with the CBC to bolster a year-round presence for the Juno Awards as a platform for promoting Canadian music.[17]

Specific award categories and their descriptions vary from year to year reflecting changes and developments in the music industry. In 1964 there were 16 categories,[13] and in 2017 there were 42.[20] Judging panels change each year. They include people from different areas of the music industry and regions of the country. An advisory committee oversees each category to ensure that all the submissions meet the required criteria.[13]

After the nominees list is published, another voting round is conducted to determine the winners of most categories. Voting for the Juno Fan Choice Award is open to the public, while voting on general categories is limited to CARAS members. Winners in genre-specific or specialty categories are determined by specially appointed CARAS juries.[21] As of 2010, ballots are audited by the major accounting company PricewaterhouseCoopers.[21] 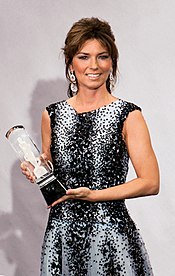 Stan Klees developed the first Juno trophies for the inaugural presentations in 1970. These were constructed from walnut wood, stood 18 inches (46 cm) tall and resembled a metronome.[4][22] When CBC televised the ceremonies in 1975, the award was constructed from acrylic instead of wood while retaining a metronome shape. The trophy was given minor modifications in succeeding years. These included a reduction in size for ease of handling, and changes to the inlay design such as a special 1996 emblem to signify the 25th anniversary.[23]

In 2000 following criticism from producers that the existing award trophy did not have an attractive television appearance, CARAS commissioned a redesigned award from Stoney Creek, Ontario, artist Shirley Elford. After reviewing three designs, two of which were patterned after the existing trophy, a new trophy design was selected featuring a glass human figure surrounded by a nickel-coated spiral symbolic of a musical staff on an aluminum base.[23][24] A few display statuettes were circulated for presentation during the ceremonies. Within months, winners received their personalized and individually made trophies from Elford.[25][26]

In October 2010, CARAS unveiled a new award design to be used from 2011 on. Elford had developed cancer and was no longer able to produce individual Juno trophies.[27] The new design, manufactured by Crystal Sensations of Markham, ON, featured a solid crystal tower containing a subsurface laser engraving depicting a spiral-wrapped human figure resembling the previous statuette.[28] Elford died in November 2011.[29]

The Juno Awards events were not conducted outside Toronto until 1991. Since then, the ceremonies have been hosted throughout Canada, reaching both coasts. The provinces of New Brunswick, Prince Edward Island, Quebec, and the Territories, have yet to play host to the Junos. In recent years, the various locations often host a number of supporting events and festivals surrounding the awards.

For several days prior to the weekend award presentations, events are held in the host city as part of a "Juno Week". Local venues host multiple events throughout the week.[52] Events include: Juno Cup, an ice hockey game that pits a team of musicians against a team of National Hockey League players as a fundraiser for MusiCounts, a charitable music education program operated by CARAS,[53] Juno Fan Fare, a meet and greet where fans can meet their favourite Canadian artists,[54] Juno Songwriters' Circle, a chance for Canada's most talented songwriters to tell their stories and play an intimate set in support of MusiCounts, and JUNOfest, a two-night music celebration that showcases over 100 bands at over a dozen venues in the host city. In 2015, Hamilton hosted the inaugural Juno Awards KickOff Concert.

Launched in January 2013, Juno TV is a digital channel featuring original and archival content specific to the Juno Awards and its nominated artists and Canadian celebrities such as Alanis Morissette, The Weeknd, Lights, and Rush. Juno TV delivers new content weekly, presenting content on a year-round basis.

Award names have changed through the years, most notably the switch in 2003 from the phrase "Best..." to " ... of the year". The previous awards are listed under their present names or the present award that is most similar. As of 2018 there are 43 awards listed below with their category numbers.[55]

The Juno Awards have received criticism from several Canadian artists.

In 1998, the Rascalz album Cash Crop was nominated for Best Rap Recording. Due to Canadian hip hop's limited commercial notability, the rap award had never been presented during the main Juno ceremony, instead being relegated to the non-televised technical awards ceremony during the previous evening.

This fact had previously been criticized for creating a barrier to the commercial visibility of Canadian hip hop. Rascalz, however, alleged that racism was a factor in the award's disadvantageous scheduling, and became the first Canadian hip hop group to explicitly decline the award on that basis.[62]

Their move sparked considerable media debate about the state of Canadian hip hop. As a result of the controversy, the Juno Awards moved the rap category to the main ceremony the following year.

Matthew Good has won four Juno Awards during his career, but has not attended the ceremonies in any of the years he won. In 2009, he criticized the awards for not promoting Canadian music at the grassroots level, saying, "When it ... isn't kind of this weekend when the Canadian music industry pretends that it's ... not just marketing warehouses for the United States, then sure, I'll be a part of it."[63]

At the 2006 Juno Awards, Kardinal Offishall stated that he would not attend the Junos anymore. "I'm not going to be the Juno's monkey no more, I'm not coming back any more." Offishall cited Canadian hip-hop's low profile at that year's awards as the catalyst for his decision. Offishall further stated, "Really, to me it's really atrocious what they do to hip-hop in this country and what they do for the artists... I just feel like the token hip-hop artist from Canada. For urban music in this country, I mean, not only was hip-hop not televised, but also reggae and R&B; to me, it's sickening." Offishall also criticized the Juno Awards for having the American group The Black Eyed Peas perform at that year's ceremony. "I just had enough. They had me perform last night and give away the award — to me it's all a farce, I really can't put up with it anymore. It's not even that it's embarrassing, it's just disappointing. It doesn't matter what you do in this country, for me anyway, they don't recognize what I do. It's just a bunch of garbage so I won't be a part of it anymore."[64]