Payette holds engineering degrees from McGill University and the University of Toronto. She worked as a research scientist before joining the Canadian Space Agency (CSA) in 1992 as a member of the Canadian Astronaut Corps. She completed two spaceflights, STS-96 and STS-127, and has logged more than 25 days in space. She also served as capsule communicator at NASA Mission Control Center in Houston and from 2000 to 2007 as CSA's chief astronaut.

In July 2013, Payette was named chief operating officer for the Montreal Science Centre. She also held a number of board appointments, including the National Bank of Canada.[4] On July 13, 2017, Prime Minister Justin Trudeau announced that Queen Elizabeth II had approved the appointment of Payette as the next governor general of Canada.[1][2][5] She was sworn in on October 2, 2017.[6]

Payette was born on October 20, 1963, in Montreal, Quebec,[7] and lived in the Ahuntsic neighbourhood, attending Collège Mont-Saint-Louis and Collège Regina Assumpta.[8][9] In 1982 she completed an International Baccalaureate diploma at the United World College of the Atlantic in South Wales, United Kingdom.[10]

For her undergraduate studies, Payette enrolled in McGill University where she completed a Bachelor of Engineering degree in electrical engineering in 1986, after which she completed a Master of Applied Science degree in computer engineering at the University of Toronto in 1990. Her thesis focused on computational linguistics, a field of artificial intelligence.[8][11][12] She is a retired member of the Ordre des ingénieurs du Québec.[13][14]

During her schooling, between 1986 and 1988, Payette also worked as a systems engineer for IBM Canada's Science Engineering division. From 1988 to 1990, as a graduate student at the University of Toronto, she was involved in a high-performance computer architecture project and worked as a teaching assistant. At the beginning of 1991, Payette joined the communications and science department of the IBM Zurich Research Laboratory in Switzerland, for a one-year visiting scientist appointment. When she returned to Canada, in January 1992, she joined the Speech Research Group of Bell-Northern Research in Montreal where she was responsible for a project in telephone speech comprehension using computer voice recognition.[15] 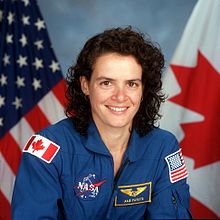 Payette was selected by the Canadian Space Agency (CSA) as one of four astronauts from a field of 5,330 applicants in June 1992. After undergoing basic training in Canada, she worked as a technical advisor for the Mobile Servicing System, an advanced robotics system and Canada's contribution to the International Space Station.[14] In 1993, Payette established the Human-Computer Interaction Group at the Canadian Astronaut Program and served as a technical specialist on the NATO International Research Study Group on speech processing.

In preparation for a space assignment, Payette obtained her commercial pilot licence and logged 120 hours as a research operator on reduced gravity aircraft. In April 1996, Payette was certified as a one-atmosphere deep sea diving suit operator. Payette obtained her captaincy on the CT-114 Tutor military jet at CFB Moose Jaw in February 1996 and her military instrument rating in 1997. Payette has logged more than 1,300 hours of flight time,[11] including 600 hours on high-performance jet aircraft.

Payette reported to the Johnson Space Center in August 1996 to begin mission specialist training. After completing one year of training, she was assigned to work on the Mobile Servicing System.[16] Payette completed the initial astronaut training in April 1998.[17]

Payette served as chief astronaut for the Canadian Space Agency from 2000 to 2007. She also worked as capsule communicator at the Mission Control Center in Houston for several years, including the return to flight mission STS-114. She was lead capsule communicator during STS-121.[11]

Payette flew on the Space Shuttle Discovery from May 27 to June 6, 1999, as part of the crew of STS-96. During the mission, the crew performed the first manual docking of the shuttle to the International Space Station, and delivered four tons of logistics and supplies to the station. On Discovery, Payette served as a mission specialist. Her main responsibility was to operate the Canadarm robotic arm from the space station.[18] The STS-96 mission was accomplished in 153 orbits of the Earth, traveling over six million kilometres (3,700,000 mi) in 9 days, 19 hours and 13 minutes. Payette became the first Canadian to participate in an ISS assembly mission and to board the Space Station.[14]

Payette visited the space station again in 2009 as a mission specialist aboard Space Shuttle Endeavour during mission STS-127 from July 15 to 31, 2009, and was the flight engineer and lead robotic operator during the mission.[19] At that time, Robert Thirsk was a member of Expedition 20 on the space station. Endeavour's docking at the space station marked the first time two Canadians met in space.[20]

During her second mission, Payette brought a signed sweater of the famed Montreal Canadiens player Maurice Richard, stating she had brought Richard, who was known as "The Rocket", into the rocket to celebrate the hockey team's 100th anniversary.[21]

Several notable Canadians, including Payette (right back), carrying the Olympic flag at the 2010 Winter Olympics opening ceremony in Vancouver

During 2010–2011, she worked at the Woodrow Wilson International Center for Scholars in Washington, D.C., and was also a scientific delegate to the United States for the Quebec Government.[22] [23][24] For the next three years, Payette was CEO of the Montreal Science Centre of the Société du Vieux-Port de Montréal.[25] During that time, she was also a vice president of the Canada Lands Company.[26][27]

Payette has served on boards of directors, at Queen's University, Canada's Own the Podium Olympic program, Montreal Science Centre foundation, Robotique FIRST Québec, Drug Free Kids Canada, the Montreal Bach Festival, the National Bank of Canada, Développement Aéroport Saint-Hubert de Longueuil, and others. In about 2017, she was appointed to the International Olympic Committee's Women in Sports Commission.[24][28] She is a member of the Ordre des ingénieurs du Québec and a fellow of the International Academy of Astronautics. As well, Payette is a member of the Faculty of Engineering Advisory Board of McGill University.[24]

Payette was announced on July 13, 2017, as Prime Minister Justin Trudeau's recommendation to be the 29th Governor General of Canada. She was scheduled to take office October 2, 2017, after the completion of briefings from the incumbent, David Johnston.[29] After the announcement was made, Johnston issued a statement congratulating Payette and welcoming "a Canadian of extraordinary achievement, admired by all".[30]

Payette was installed as governor general on October 2, 2017. Afterwards, she urged Canadians to work together on issues such as climate change, migration and poverty. "Anyone can accomplish anything and rise to the challenge as long as they are willing to work with others, to let go of the personal agenda, to reach a higher goal and to do what is right for the common good. This is exactly what I hope my mandate as the governor-general will reflect", Payette said.[32]

Reevaluating the role of governor general

As she was completing her first year as the viceregal representative in September 2018, Payette faced some criticism about controversial comments she had made against those who believe in creationism and those who did not believe in climate change. At the Canadian Science Policy Conference the next month, she argued strongly for greater public acceptance of science, saying that too many people believe in astrology, deny climate change, and believe that "maybe taking a sugar pill will cure cancer".[33] Committee for Skeptical Inquiry concerning climate change, commented that her remarks were "refreshing". George Dvorsky from Gizmodo.org stated "Her words were a breath of fresh air".[34]

In subsequent comments, Payette emphasized the importance of debate and critical thinking but admitted that she was still growing into her role and needed more time to adapt to the position. "I learned that you have to be careful about how you say things, but not what you say", she added.[35] Some time later, she offered an additional explanation to CPAC. "I made a speech as I had as an astronaut and I'm not an astronaut any longer, I'm governor general. I represent all Canadians. I've learned those lessons."[36]

Weeks later, she faced criticism about her work ethic, with some suggesting that she had not devoted enough time and dedication to the role of governor general and had not visited several of the provinces in her nearly 12-month tenure.[36] The Toronto Star published specifics confirming the more numerous appearances her two predecessors had made per year.[37] Rideau Hall spokesperson Marie-Ève Létourneau said that "The first year of every mandate is a period of learning, adjustment and adaptation from both the Governor General and Rideau Hall staff."[38]

On September 27, Payette acknowledged the articles that had painted an "unfavourable image of our work" in an e-mail to staff, expressed regret about the effect of the criticisms on morale, and assured them that she was "very proud of all we have achieved together to date".[36]

On July 21, 2020, CBC News reported that Payette had allegedly created a toxic work environment at Rideau Hall by verbally abusing employees.[40] Two days later, spurred on by the CBC News report, the Privy Council Office formally launched an investigation into her conduct.[41] Multiple former employees of the Montreal Science Center told the National Post they witnessed similarly abusive behaviour by Payette in her time at the institution, although others described her behaviour as the result of rigorously high standards.[42]

Payette was married twice, first to François Brissette in the 1990s,[43] and secondly to William Flynn, with whom she had a son in 2003,[44] and from whom she divorced in 2015.[45] She is fluent in French (her mother tongue) and English, and can converse in Spanish, German, Italian and Russian. Payette plays the piano and has sung with the Montreal Symphony Orchestra, Tafelmusik Chamber Choir.[46] Currently, she sings with the Ottawa Bach Choir.[47] Among her other hobbies are running, skiing, racquet sports, and scuba diving.[14]

Payette was charged with second degree assault in Maryland, on November 24, 2011. At least one anonymously quoted source has alleged that the victim of the assault was her then-husband, Billie Flynn. Though the charges were later dropped, the couple split several weeks later and subsequently divorced. Payette has stated that charges were "unfounded" but refused to comment further on the circumstances leading to her being charged with assault.[48]

Payette holds 28 honorary doctorates,[58] Some of the honorary degrees she has received:

Payette assisted in the carrying of the Olympic flag in the opening ceremonies of the 2010 Olympic Winter Games in Vancouver, British Columbia.