Jonquière (/ʒɒŋˈkjɛər/; French pronunciation: ​[ʒɔ̃kjɛʁ]; 2011 population: 54,072[1]) is a borough (arrondissement) of the city of Saguenay in the Saguenay–Lac-Saint-Jean region of Quebec, Canada. It is located on the Saguenay River, near the borough of Chicoutimi. 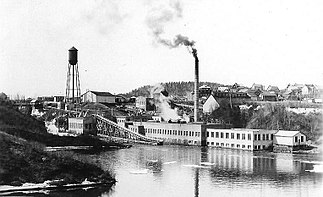 Jonquière was founded in 1847 by Marguerite Belley, who came from La Malbaie to settle on the Rivière aux Sables. It was named after the Marquis de La Jonquière, governor of New France from 1749 to 1752. 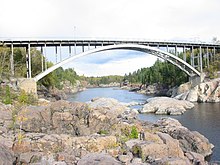 Growth came from the construction of pulp and paper mills at the beginning of the 20th century. Between 1925 and 1928, the world's largest aluminum plant was built along with the city Arvida (then a separate town). In 1942, to supply power to the plant, Alcan built a hydroelectric station at Shipshaw that was the largest in the world at that time.[2] Jonquière, Arvida, and Kénogami were amalgamated into a single city, Jonquière, in 1975. Jonquière was the host city for the Quebec Games in the winter of 1976, and for the Canoe/Kayak World Championships in slalom and whitewater racing, in 1979.

Much of Jonquière's development owed its strength to the Price family, who ran a pulp and paper factory in Kénogami. Today that factory is owned by Resolute Forest Products. Arvida is the home of an aluminium plant owned by Rio Tinto Alcan.

The Rivière aux Sables runs through the centre of Jonquière. Significant damage to the city's buildings was caused by the 1996 Saguenay Flood.