Jones is a surname of Welsh origin, meaning "son of Ioan," or other similar names that ultimately evolved from the Hebrew name יְהוֹחָנָן (Yəhôḥānān), Johan for short. When Welsh culture adopted the name, it evolved to variations of traditionally Welsh names: Ieuan, Iowan, Ioan, Iwan, or even Siôn (note how the letter 'J' was originally being pronounced as 'i', akin to how J is pronounced in the latin alphabet).

It is most popular in Wales, spreading outward from the mainland into England.[1][2][3] 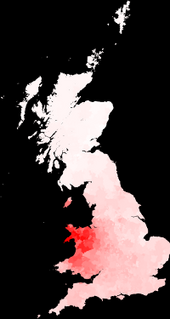 The surname Jones first appears on record as a surname in England in 1273 with the name "Matilda Jones".[3] Others put the first known record of the surname Jones as 1279, in Huntingdonshire, England.[4] Around the time of the Laws in Wales Acts in the early to mid 16th century, the traditional Welsh system of patronymics was increasingly replaced by surnames, since English was the official state language and all official documents needed to be in English; this led to the Anglicisation of Welsh names, meaning that English Christian names (such as John) became increasingly common to distinctively Welsh Christian names such as Meredudd (Meredith) and Llewelyn. Thus "Mab Ioan" or "ap Sion" (and many other variations) meaning "son of John" became the surname Jones in a large number of cases, making it a very frequently used surname.[5]