Johnson Controls International plc is an American Irish-domiciled multinational conglomerate headquartered in Cork, Ireland,[4] that produces Fire, HVAC, and Security equipment for buildings. As of mid-2019, it employed 105,000 people in around 2,000 locations across six continents.[3] As of 2017[update], it was listed as 389th in the Fortune Global 500;[5] in 2017, it became ineligible for the Fortune 500, as it was headquartered outside the U.S.[6]

The company was formed via the merger of American company Johnson Controls with Tyco International, announced on 25 January 2016. The merger led to the avoidance of U.S. taxes on its foreign market operations and a financial windfall for the CEO of Johnson Controls at that time, Alex Molinaroli.[7][8] As of November 2018[update], Johnson Control's tax inversion to Ireland is the 3rd largest U.S. tax inversion in history. 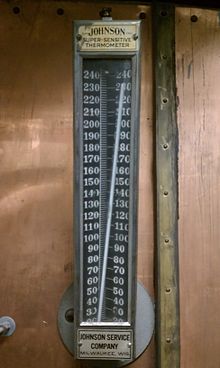 A Johnson Super-Sensitive Thermometer on an air conditioning unit

In 1883, Warren S. Johnson, a professor at the Whitewater Normal School (now University of Wisconsin–Whitewater) in Whitewater, Wisconsin, received a patent for the first electric room thermostat. His invention helped launch the building control industry and was the impetus for a new company. Johnson and a group of Milwaukee investors led by William Plankinton incorporated the Johnson Electric Service Company in 1885 to manufacture, install and service automatic temperature regulation systems for buildings.[9] After Johnson's death in 1911, the company decided to focus on its temperature control business for nonresidential buildings. The company was renamed Johnson Controls in 1974. In 1978, Johnson Controls acquired battery company Globe-Union. In 1985, Johnson Controls acquired automotive seating companies Hoover Universal and Ferro Manufacturing.[10]

During the 2008–2009 recession, the company's president, Keith Wandell, lobbied Congress for a bailout of the companies that Johnson supplied.[11] The Johnson Controls plant in Lakeshore, Ontario, closed in late March 2010 and the property was sold.[12] In 2013, Stephen Roell retired and Alex Molinaroli took his position as CEO and chairman of the board.[13]

Hillary Clinton condemned the company for wanting to escape United States taxes through the merger after having "begged" the government for financial help in 2008.[16] The Johnson deal, termed "outrageous"[17] by Fortune magazine, qualifies as a "super inversion" because Tyco shareholders will own 44% of the company, thus avoiding penalties that the United States Department of the Treasury has imposed on other inversion deals.[citation needed] The firm estimated that it would save about US$150 million a year by avoiding American taxes.[18]

On October 31, 2016, the former Johnson Controls Automotive Experience division was spun off as a separate, publicly traded company, Adient, and began trading on the New York Stock Exchange.[19] In March 2017, it was announced that Scott Safety, its safety gear business, would be bought by 3M for $2 billion.[20]

On September 1, 2017, George Oliver was appointed as Chairman and CEO, an acceleration by 6 months from the original plans. [21]

In 1982, Johnson Controls enacted what it called a "fetal protection policy", which denied women the right to work on the battery production line because of the potential harm to a fetus they might conceive. Women were allowed to work on the production line only if they could prove that "... their inability to bear children had been medically documented." In April 1984, the United Automobile Workers sued Johnson Controls on behalf of three employees. These employees were Mary Craig, who had chosen to be sterilized to avoid losing her job, Elsie Nason, a 50-year-old divorcee, who had suffered a loss of compensation when she was transferred from a high paying job that exposed her to lead, and Donald Penney, who had been denied a request for a leave of absence for the purpose of lowering his blood lead levels because he intended to become a father. The case was argued before the Supreme Court of the United States on October 10, 1990 and was decided on March 20, 1991. The Court ruled in favor of the plaintiffs. This was a landmark ruling because it affirmed that "... it is no more appropriate for the courts than it is for individual employers to decide whether a woman's reproductive role is more important to herself and her family than her economic role."[22]

The Building Technologies & Solutions business unit designs, produces, installs and services heating, ventilation and air conditioning systems, industrial refrigeration, building management systems, fire and security systems and mechanical equipment for commercial and residential buildings. The brands produced under this business unit are York, TempMaster, Metasys, Panoptix, Frick and Sabroe.[23] This unit also works with organizations to reduce the energy consumption and operating costs of their buildings.[24][25] This includes retrofitting existing buildings such as the Empire State Building[26] and working on maximizing efficiency in new construction such as the Burj Khalifa in Dubai.[27] Building Technologies & Solutions is the company's longest-running business unit, dating to 1885 when Johnson founded the Johnson Electric Service Company[28] after patenting the electric thermostat in 1883.[29] As of 2012, the business unit operated from 700 branch offices in more than 150 countries.[24]

Johnson Controls was one of the defendants in a multimillion-dollar federal court lawsuit in San Juan, Puerto Rico in a case where 98 people perished and 140 were injured in a fire at the DuPont Plaza Hotel and its casino on New Year's Eve, December 31, 1986. The plaintiffs claimed that Johnson Controls sold and installed an energy management system that failed to give early warning of the fire.[30] After nine months of trial, the company and its energy management system were absolved of blame when the court issued a directed verdict.[31][32] When this trial was completed the plaintiffs had accumulated approximately $220,908,549.00 in damages as a result of various settlements and a jury verdict against some other defendants.[33]

This unit was sold to Brookfield Business Partners and re-made into a new company, Clarios, as of May 1, 2019.[34]

The Power Solutions business unit designs and manufactures automotive batteries for passenger cars, heavy and light duty trucks, utility vehicles, motorcycles, golf carts and boats.[24][35][36][37][38] It supplies more than one third of the world's lead-acid batteries[39] to automakers and aftermarket retailers including Wal-Mart, Sears, Toyota, and BMW.[40][41][42] Lead acid battery brands produced under this business unit include Continental, OPTIMA, Heliar, LTH, Delkor and VARTA automotive batteries.[24] This part of the company also manufactures Lithium-ion cells and complete battery systems to power hybrid and electric vehicles such as the Ford Fusion[43] and Daimler's S-Class 400.[44] Additionally, it manufactures Absorbent Glass Matt (AGM) and Enhanced Flooded Batteries (EFB) batteries to power Start-Stop vehicles such as the Chevy Malibu and Ford Fusion.[24][39][45][46][47][48][49][50] As of 2012, the business unit operated from 60 locations worldwide.[24] On November 13, 2018 Johnson Controls agrees to sell its Power Solutions Division to Brookfield Business Partners. [51]

Johnson Controls is exhibiting a plug-in hybrid concept called the re3. Johnson Controls produced cells for lithium-ion hybrid vehicle batteries in France under the joint venture with Saft. Battery assemblies were developed and produced in Hannover(Germany), Zwickau (Germany) and Milwaukee(USA)[62]

Despite some signs of promise, Johnson Controls was increasingly dissatisfied with the restrictions of the agreement and also sought a more important ally.[63][64] In May 2011, the American company requested the dissolution of Johnson Controls-Saft Advanced Power Solutions LLC to the Delaware Court of Chancery.[63][64] The two companies agreed to the separation and Johnson Controls paid Saft $145 million for its shares in the joint venture, as well as for the right to use certain technology developed by it. Johnson Controls retained the Michigan facility built by the partnership. The French joint facility was transferred to Saft.[65][66][67]

Coleman Heating & Air Conditioning is a major manufacturing brand of HVAC equipment, and was formerly an independent HVAC manufacturing company. The company began as a division of the Coleman Company in 1958 and was acquired by Evcon in 1990, which in turn was acquired by Johnson Controls in 1996.[68][69][70] Of the twelve largest American furnace brand names represented at Gas Furnace Guide, the Coleman brand received an average ranking of 3.7 out of 5 stars.[71]

York International is the final name of a company started in York, Pennsylvania, USA, in 1874, which developed the York brand of refrigeration and HVAC equipment.[72][73] The York brand has been owned since August 2005 by Johnson Controls, when it was sold to them for $3.2 billion.[74][75] At the time of the acquisition, it was the world's largest independent manufacturer of air conditioning, heating, and refrigeration machinery. Its stock symbol was formerly YRK.