De Chastelain was born in Romania to Scottish and American parents and was educated in England and Scotland before his family emigrated to Canada in 1954. There, de Chastelain became a Militia private and enrolled in the Royal Military College of Canada, going on to pursue a career in the Canadian Army. He was commissioned into Princess Patricia's Canadian Light Infantry and rose eventually to be twice Chief of the Defence Staff, with a break of a year during which he served as Canada's ambassador to the United States. In 1995, de Chastelain became active in the Northern Ireland peace process and eventually focused on the disarmament of paramilitary groups in Northern Ireland. 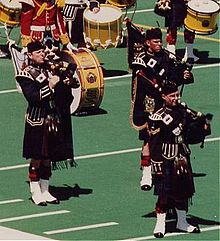 On parade with The Calgary Highlanders on 30 June 1990; General de Chastelain (top left)

De Chastelain started his military career as a Militia private in the Calgary Highlanders in which he served from January to September 1956.[3] He was enrolled in the Royal Military College of Canada in September 1956 and graduated in 1960 with a Bachelor of Arts degree in history and a commission in Princess Patricia's Canadian Light Infantry (PPCLI), two years before he became a naturalized Canadian. Performing regimental duty in Canada, Germany, and Cyprus, de Chastelain subsequently attended the British Army staff college in Camberley in 1966 and was commanding officer of the Second Battalion PPCLI from 1970 to 1972.[4]

As a colonel, he commanded CFB Montreal for a two-year period ending with the 1976 Summer Olympics in that city. He was also Deputy Chief of Staff of the United Nations Force in Cyprus (UNFICYP) and Commander of the Canadian contingent there. As a brigadier-general, he successively became Commandant of the Royal Military College of Canada in 1977,[3] Commander of 4 Canadian Mechanized Brigade Group in Lahr, Germany in 1980 and Director General Land Doctrine and Operations at National Defence Headquarters in Ottawa, Ontario in 1982.[4]

As a major-general, de Chastelain was Deputy Commander of the Canadian Army (then called Mobile Command) and Commander of the Mobile Command Division, which was exercised as such in 1985 on Exercise RV '85. As a lieutenant-general, he became Assistant Deputy Minister for Personnel in 1986[3] and then Vice-Chief of the Defence Staff in 1988.[3] In 1989, he was promoted to the rank of general and appointed Chief of the Defence Staff.[3]

In 1993, he transferred to the Reserves and was appointed Ambassador to the United States by Brian Mulroney.[3] In 1994, shortly after the election of Jean Chrétien, he was recalled to Regular Force duty and re-appointed Chief of the Defence Staff, replacing Admiral Anderson and vacating the office of Ambassador for Raymond Chrétien. de Chastelain served as Chief of Defence Staff until his retirement in December 1995.[3] 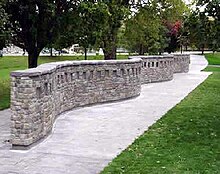