John Jacob Astor (born Johann Jakob Astor; July 17, 1763 – March 29, 1848) was a German–American businessman, merchant, real estate mogul, and investor who made his fortune mainly in a fur trade monopoly and by investing in real estate in or around New York City.

Born in Germany, Astor immigrated to England as a teenager and worked as a musical instrument manufacturer. He moved to the United States after the American Revolutionary War.

Seeing the expansion of population to the west, he entered the fur trade and built a monopoly, managing a business empire that extended to the Great Lakes region and Canada, and later expanded into the American West and Pacific coast. Seeing a decline in demand due to changing European tastes, he got out of the fur trade in 1830, diversifying by investing in New York City real estate. Astor was highly wealthy and became a famed patron of the arts.[2]

He was the first prominent member of the Astor family and the first multi-millionaire in the United States.

Johann Jakob Astor was born in Walldorf in 1763 near Heidelberg in the Electoral Palatinate.[3][4] He was the youngest son of Johann Jacob Astor and Maria Magdalena vom Berg. His three elder brothers were George, Henry, and Melchior. In his childhood, Johann worked in his father's butcher shop[5] and as a dairy salesman.[6] In 1779, at the age of 16, he moved to London to join his brother George in working for an uncle's piano and flute manufacturer, Astor & Broadwood.[5] While there, he learned English and anglicized his name to John Jacob Astor.[7]

Immigration to the United States

In 1783[5] or March 1784,[citation needed] Astor immigrated to New York City, just after the end of the American Revolution when the United States became independent of Great Britain. There, he rented a room from Sarah Cox Todd, a widow, and began a flirtation with his landlady's daughter, also named Sarah Cox Todd. The young couple married in 1785. His intent had been to join his brother Henry, who had established a butcher shop in New York City.[6][8][9]

However, a chance meeting with a fur trader on his voyage had inspired him to join the North American fur trade as well.[3][8] After working at his brother's shop for a time, Astor began to purchase raw hides from Native Americans, prepare them himself, and resell them in London and elsewhere at great profit.[5] He opened his own fur goods shop in New York in the late 1780s and also served as the New York agent of his uncle's musical instrument business. After gold was discovered, Astor looked for business throughout the United States.[10]

Astor took advantage of the 1794 Jay Treaty between Great Britain and the United States, which opened new markets in Canada and the Great Lakes region. In London, Astor at once made a contract with the North West Company, who from Montreal rivaled the trade interests of the Hudson's Bay Company, then based in London.[citation needed]

Astor imported furs from Montreal to New York and shipped them to Europe.[11] By 1800, he had amassed almost a quarter of a million dollars (the equivalent of six million dollars in 2020) and had become one of the leading figures in the fur trade. His agents worked throughout the western areas and were ruthless in competition. In 1800, following the example of the Empress of China, the first American trading vessel to China, Astor traded furs, teas, and sandalwood with Canton in China, and greatly benefited from it.[12]

The U.S. Embargo Act in 1807, however, disrupted Astor's import/export business because it closed off trade with Canada. With the permission of President Thomas Jefferson, Astor established the American Fur Company on April 6, 1808. He later formed subsidiaries: the Pacific Fur Company, and the Southwest Fur Company (in which Canadians had a part), in order to control fur trading in the Great Lakes areas and Columbia River region. His Columbia River trading post at Fort Astoria (established in April 1811) was the first United States community on the Pacific coast. He financed the overland Astor Expedition in 1810–12 to reach the outpost. Members of the expedition were to discover South Pass, through which hundreds of thousands of settlers on the Oregon, Mormon, and California trails used to later pass through the Rocky Mountains.[12]

Astor's fur trading ventures were disrupted during the War of 1812, when the British captured his trading posts. In 1816, he joined the opium-smuggling trade. His American Fur Company purchased ten tons of Turkish opium, and shipped the contraband item to Canton on the packet ship Macedonian. Astor later left the China opium trade and sold solely to the United Kingdom.[13]

Astor's business rebounded in 1817 after the U.S. Congress passed a protectionist law that barred foreign fur traders from U.S. territories. The American Fur Company came to dominate trading in the area around the Great Lakes, absorbing competitors in a monopoly. John Jacob Astor had a townhouse at 233 Broadway in Manhattan[14] and a country estate, Hellgate, in Northern New York City.[14]

In 1822, Astor established the Robert Stuart House on Mackinac Island in Michigan as headquarters for the reorganized American Fur Company, making the island a metropolis of the fur trade. Washington Irving described this at length, based on contemporary documents, diaries, etc., in his travelogue Astoria. Astor's commercial connections extended over the entire globe, and his ships were found in every sea. He and Sarah moved to a townhouse on Prince Street in Manhattan, New York.[10]

Astor began buying land in New York City in 1799 and acquired sizable holdings along the waterfront. After the start of the 19th century, flush with China trade profits, he became more systematic, ambitious, and calculating by investing in New York real estate. In 1803, he bought a 70-acre farm on which he built the Astor Mansion at Hellgate. The property ran west of Broadway to the Hudson River between 42nd and 46th streets. That same year, and the following year, he bought considerable holdings from the disgraced Aaron Burr.[15]

In the 1830s, Astor foresaw that the next big boom would be the build-up of New York, which would soon emerge as one of the world's greatest cities. Astor sold his interests in the American Fur Company, as well as all his other ventures, and used the money to buy and develop large tracts of Manhattan real estate. Astor correctly predicted the city's rapid growth northward on Manhattan Island, and he purchased more and more land beyond the then-existing city limits. Astor rarely built on his land, but leased it to others for rent and their use. After retiring from his business, Astor spent the rest of his life as a patron of culture. He supported the ornithologist John James Audubon in his studies, art work, and travels, and the presidential campaign of Henry Clay, Kentucky statesman.[12] 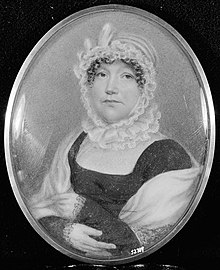 On September 19, 1785, Astor married Sarah Cox Todd, who died in 1842. Her parents were Scottish immigrants Adam Todd and Sarah Cox.[16] Although she brought him a dowry of only $300, she possessed a frugal mind and a business judgment that he declared better than that of most merchants. She assisted him in the practical details of his business,[17] and managed Astor's affairs when he was away from New York.[18]

They had eight children:

Astor belonged to the Freemasons, a fraternal order, and served as Master of Holland Lodge #8, New York City in 1788. Later he served as Grand Treasurer for the Grand Lodge of New York.[19] He was president of the German Society of the City of New York from 1837 to 1841.[20]

At the time of his death in 1848, Astor was the wealthiest person in the United States, leaving an estate estimated to be worth at least $20 million. His estimated net worth would have been equivalent to approximately $649.5 million in 2019 U.S. dollars.[1]

In his will, Astor bequeathed $400,000 to build the Astor Library for the New York public,[3] which was later consolidated with other libraries to form the New York Public Library. He also left $50,000 for a poorhouse and orphanage in his German hometown of Walldorf.[3] The Astorhaus is now operated as a museum honoring Astor. It is a renowned and popular fest hall for marriages. Astor donated gifts totaling $20,000 to the German Society of the City of New York, during his term as president, from 1837 until 1841.[21]

Astor left the bulk of his fortune to his second son William, because his eldest son, John Jr., was sickly and mentally unstable. Astor left enough money to care for John Jr. for the rest of his life. Astor is buried in Trinity Church Cemetery in Manhattan, New York. Many members of his family had joined its congregation, but Astor remained a member of the local German Reformed congregation to his death.[22] In the short story Bartleby, the Scrivener, Herman Melville used Astor as a symbol of men who made the earliest fortunes in New York.[citation needed]

The pair of marble lions that sit by the entrance of the New York Public Library Main Branch at Fifth Avenue and 42nd Street were originally named Leo Astor and Leo Lenox, after Astor and James Lenox, who founded the library from his own collection. Next, they were called Lord Astor and Lady Lenox (both lions are males). Mayor Fiorello La Guardia renamed them "Patience" and "Fortitude" during the Great Depression.[citation needed]

In 1908, when the association football club FC Astoria Walldorf was formed in Astor's birthplace in Germany, the group added "Astoria" to its name in his, and the family's, honor.[23]