John Christopher Wells (born 11 March 1939 in Bootle, Lancashire)[1] is a British phonetician and Esperantist. Wells is a professor emeritus at University College London, where until his retirement in 2006 he held the departmental chair in phonetics.[2]

Wells earned his bachelor's degree at Trinity College, Cambridge and his master's degree and his PhD at the University of London.

Wells is known for his book and cassette Accents of English, the book and CD The Sounds of the IPA, Lingvistikaj Aspektoj de Esperanto, and the Longman Pronunciation Dictionary. He is the author of the most widely used English-Esperanto dictionary.

Until his retirement, Wells directed a two-week summer course in phonetics for University College London, focusing on practical and theoretical phonetics, as well as aspects of teaching phonetics. The course ends with written and oral examinations, for which the IPA Certificate of Proficiency in the Phonetics of English is awarded.

From 2003 to 2007 he was president of the International Phonetic Association. He is also a member of the six-man Academic Advisory Committee at Linguaphone.[3]

Wells has long been a pioneer of new technology. He is the inventor of the X-SAMPA ASCII phonetic alphabet for use in digital computers that could not handle IPA symbols. He learned HTML during the mid-1990s, and he created a Web page that compiled media references to Estuary English, although he was sceptical of the concept.[4] After retirement, Wells ran a regular blog on phonetic topics from March 2006 to April 2013. He announced the end of his blog on 22 April 2013 saying, "if I have nothing new to say, then the best plan is to stop talking."[5]

Work on accents of English

A considerable part of Wells's research focuses on the phonetic description of varieties of English. In 1982, Cambridge University Press published his three volumes of Accents of English that described accents all over the English-speaking world in phonetic terminology. This applied consistent terminology to accents that had previously been analysed in isolation. Accents of English[6] defined the concept of lexical sets, a concept in wide usage. A lexical set is a set of words (named with a designated element) that share a special characteristic. For example, words belonging to lexical set BATH have the /æ/ phoneme in the United States and /ɑː/ phoneme in Received Pronunciation. In addition, Wells is acknowledged as the source of the term rhotic to describe accents where the letter r in spelling is always pronounced phonetically.[7]

Before writing Accents of English, Wells had written a very critical review of the Linguistic Atlas of England, which was the principal output of the Survey of English Dialects.[8] He argued that the methodology was outdated, that the sample was not representative of the population and that it was not possible to "discover with any certainty the synchronic vowel-system in each of the localities investigated".[8] KM Petyt noted in his review of Accents of English that Wells had made abundant use of the data from the Survey of English Dialects in some sections of the work whilst criticising the survey in other parts of the same work.[9] 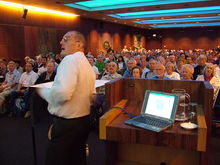 John Wells at the World Congress of Esperanto, Rotterdam 2008

Wells was president of the Spelling Society, which advocates spelling reform, from 2003 to 2013. He was criticised in a speech by David Cameron for advocating tolerance of text spelling.[10]

His father was originally from South Africa, and his mother was English; he has two younger brothers. Wells grew up in Up Holland, Lancashire.[11][12] was born in Up Holland to the vicar of the parish, Philip Wells.[13] He has commented on the accent of the area and how it contrasted with the Received Pronunciation that was spoken in his home in his book Accents of English; vol. 2: the British Isles.

He attended St John's School, Leatherhead,[citation needed] studied languages and taught himself Gregg shorthand. Having learned Welsh, he was interviewed in Welsh on radio; according to his CV, he has a reasonable knowledge of ten languages.[1] He was apparently approached by the Home Office to work on speaker identification but turned down the offer as it was still considered unacceptable to be gay at the time, and he feared that the security check would make his sexual orientation public.[4] In September 2006 he signed a civil partnership with Gabriel Parsons, a native of Montserrat and his partner since 1968.[4][14]

Wells is a member of London Gay Men's Chorus and was featured in their It Gets Better video.[citation needed] He is also a player of the melodeon[4] and has uploaded videos of his playing to YouTube.[citation needed]