Lieutenant-Colonel John By (7 August 1779[1] – 1 February 1836) was an English military engineer, best remembered for supervising the construction of the Rideau Canal and founding Bytown in the process, which would become the Canadian capital, Ottawa.[3]

By was born in Lambeth, Surrey, the second of three sons of George By, of the London Customs House, and Mary Bryan. Nothing certain is known about By’s early education; Andrews[2] suggests that it could have been at Sir Thomas Rich's School in Lambeth. Wherever it was it would have provided a good knowledge of arithmetic and writing, competence in English, French and Latin, and some drawing ability – all to a standard sufficient for entry to the Royal Military Academy, Woolwich, at age 13. He graduated from the academy in 1799 and, in August, was gazetted a second lieutenant in the Royal Artillery; by the end of the year he had transferred to the Royal Engineers.[4] In 1800 he was posted to the fortifications at Plymouth, which were being modernised.

In July 1802 By was posted to Ottawa, where he worked on the fortification of Quebec City and on improving the navigability of the Saint Lawrence River.[4] In early 1811 By returned to England, and almost immediately was posted to Portugal, where he served during the Napoleonic wars before falling ill (probably with malaria);[2] he was back England in August. The Royal Engineers' Window in Rochester Cathedral indicates that By had served without injury during the conflicts.

In 1812, By was appointed Commanding Royal Engineer of the Royal Gunpowder Mills in Waltham Abbey. He was responsible for reconstruction of the corning house[5] and building two new gunpowder mills, following a huge explosion on 27 November 1811,[6] when “no. 4 Press House and the adjoining Corning House blew up, killing seven workmen and breaking windows in Hackney ten miles away.”[7] By introduced two new presses to replace the twelve that had been lost. They, and a new design of charcoal press, proved to be more efficient and cheaper to run.[2]

With the end of the war By retired from the military, but in 1826 in view of his engineering experience in Canada, he was recalled and returned to Canada to supervise the construction of the Rideau Canal.[8] Since the canal was to begin in the wild and sparsely populated Ottawa River valley, his first task was the construction of a town to house the men who were to work on the canal, and associated services. The resulting settlement, called Bytown in his honour, was later renamed after the river.[9]

The canal was completed in six years, and was acclaimed as an engineering triumph.[10] The huge cost overruns, however, became a political scandal for the Board of Ordnance. Colonel By was recalled to London to face accusations that he had made a number of unauthorised expenditures.[8] The charges were spurious and a parliamentary committee exonerated him. By petitioned Wellington and other military leaders to review his case, but the damage was done and he never received a formal commendation for his work on the canal.[11][12] He died in 1836 [13], and is buried in the village of Frant in Sussex.

John By married twice. His first wife was Elizabeth Johnson Baines, daughter of a naval captain, at Madron on 12 November 1801. Elizabeth died in December 1814 and was buried on the 16th at Cheshunt. His second wife was Esther March, whom he married in Cheshunt on 14 March 1818.

John and Esther had two daughters: Harriet Martha, born on 14 March 1821 in Frant.[14] She died unmarried on 2 October 1842 and was buried, with her parents, at St. Alban's churchyard in Frant.

The second daughter was Esther March, born on 18 February 1819 in Marylebone, She married Percy Ashburnham in Ticehurst in 1838, and had two children: Esther Harriet in 1844, who died the following year; and Mary Catherine in 1847, who died aged three. Esther March Ashburnham died on 6 February 1848 and was also buried at Frant.

John By's name lives on in a number of contexts:[12]

A sundial behind the present-day site of East Block on Parliament Hill and overlooking the set of locks was used on that site by the Royal Sappers and Miners under Lt Colonel John By, RE in 1826–27 and was restored in 1919. During the construction of the Rideau Canal, Barracks Hill was the site of the military barracks and military hospital.[18] 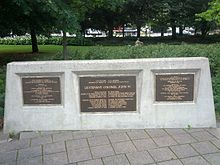 Plaque commemorating fountain in memory of John By in Ottawa

A historical plaque located on the grounds of Colonel By Secondary School states, "Colonel John By (1779–1836) was born and educated in England and first came to Canada in 1802. As a member of the Royal Engineers, he worked on the first small locks on the St. Lawrence River as well as the fortifications of Quebec. He returned to England in 1811 and fought in the Peninsular War, but came back to Canada in 1826 to spend five summers heading the construction of the Rideau Canal, the 200 km long waterway, which now connects Ottawa and Kingston. This formidable task included the building of about 50 dams and 47 locks, without the aid of modern equipment. But the amazing feat was never recognized in Colonel By's own lifetime, and he died three years after its completion, never imagining that many thousands of Canadians would greatly admire and value his achievement in the centuries to come. Colonel By's attributes of courage, determination, and diligence inspire us to emulate him, in the hopes that we too may somehow serve our country in a way which will benefit future generations."[19]

A plaque was erected by the Ontario Archaeological and Historic Sites Board at Jones Falls Lockstation commemorating Lieutenant Colonel John By, Royal Engineers, the superintending engineer in charge of the construction of the Rideau Canal. The plaque notes that the 123-mile long Rideau Canal, built as a military route and incorporating 47 locks, 16 lakes, two rivers, and a 350-foot-long (110 m), 60-foot-high (18 m) dam at Jones Falls, was completed in 1832.

A plaque erected by the Province of Ontario sits in the stairwell of Lambeth Town Hall, in Brixton, London, England, commemorating By's Lambeth origins.[20]