Bracken was born in Ellisville, Ontario, the son of Ephriam Michael Bracken and Alberta Gilbert, and was educated at Brockville Collegiate, the Ontario Agricultural College and at the University of Illinois. In 1909, he married Alice Wylie Bruce. He was professor of animal husbandry at the University of Saskatchewan from 1910 to 1920,[2] when he became President of the Manitoba Agricultural College.

In 1922, the United Farmers of Manitoba unexpectedly won the provincial election. The UFM's expectations had been so low going into the election that they had not even named a leader and ran candidates in only two thirds of the seats.

With their upset victory, the UFM faced the task of naming a leader who would become the province's new premier. After federal MPs Thomas Crerar and Robert Hoey turned down the UFM's offer, they turned to Bracken, who accepted, and he was sworn in as premier on August 8. He entered the legislature a few months later after winning a deferred election in the northern riding of The Pas. (A similar situation had occurred with Ernest C. Drury when the United Farmers of Ontario won the 1919 election in that province.)

Bracken was a political outsider and gave the UFM the professional grounding it needed. The United Farmers generally rejected the partisanship of the Liberal and Conservative parties and favoured government policies based on independence and principles of business management. The UFM governed as the Progressive Party of Manitoba, and Bracken served as Manitoba's premier for over 20 years.

Bracken's government was, in most respects, conservative and cautious. It was dominated by rural interests, who controlled the Legislative Assembly of Manitoba through an outmoded[neutrality is disputed] system of representation. The accident-prone first past the post voting system used in rural single-member districts was replaced by alternative voting during his government's reign. Labour did not fare well under Bracken's leadership; he had little sympathy for the leaders of the Winnipeg General Strike and once fired a number of government workers to show his independence from organized labour.

In the 1920s, Bracken oversaw an increase in taxation and created the provincial income tax. He lowered expenditures in health, education, and welfare but introduced a pension for all citizens over seventy years old in 1928. Under his administration, the province created a censorship board that regulated motion pictures. In 1923, Manitoba voted to end the prohibition of alcohol. The restrictive Liquor Control Act, passed that same year, sold liquor at provincially controlled outlets, resulting in the generation of a substantial new income.

Bracken worked to promote staple industries such as mining, timber cutting, and fishing, while also promoting hydroelectric power. He successfully had the Hudson Bay Railway create a branch line to Flin Flon, resulting in the opening of a copper and zinc mine there in 1926. Bracken was a vocal proponent of the provincial control of natural resources and influenced Mackenzie King's 1930 decision to give Manitoba, Alberta, and Saskatchewan control over crown lands.[3]

In keeping with the UFM's "anti-party" philosophy, Bracken favoured non-partisan government. In 1931, his Progressives formed an alliance with the Manitoba Liberal Party, and the two parties eventually merged into one. In 1940, Bracken formed a wartime coalition government that included the Conservative, Co-operative Commonwealth Federation (CCF) and Social Credit parties. 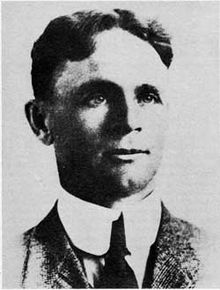 Bracken at a young age

When Bracken left provincial politics in 1943, there were only 5 opposition Members of the Legislative Assembly (MLAs) in a 57-member parliament. His coalition remained intact until 1950 although the CCF left in 1943.

Despite having co-operated with the Liberals at the provincial level, Bracken was asked by a number of senior federal Conservatives (including Arthur Meighen) to take over the leadership of the weak national Conservative Party in 1942. He agreed to seek the party's leadership on the condition that it change its name to the Progressive Conservative Party. He was elected leader at the party's 1942 leadership convention. Bracken stepped down as Manitoba premier shortly thereafter, and was succeeded by Stuart S. Garson.

Bracken did not seek a seat in the House of Commons until the 1945 Canadian election. While Bracken won the rural seat of Neepawa, the Tories were defeated nationally. The Tories picked up 29 seats, but were still well behind the governing Liberals; most of the seats that they did pick up were in Ontario, which was credited more to the popular provincial government of George A. Drew than Bracken's leadership of the national party. Bracken became Leader of the Opposition and remained leader of the Tories until he was pushed to resign in favour of Drew in 1948.

It has been argued, with some credibility, that Bracken never succeeded in impressing his personal authority over the national PC organization. As a western populist, he was distrusted by the party's eastern establishment. There are reports that some senior Tories wanted him removed as leader as early as 1944. More importantly, during the 1945 election, Bracken had promised conscription for the planned invasion of Japan.[4] The Liberal Prime Minister, William Lyon Mackenzie King, by contrast had promised that one division of volunteers would take part in the invasion of Japan.[4] Operation Downfall, the code-name for the invasion of Japan, was widely expected to be bloody campaign as the Battles of Iwo Jima and Okinawa were the "dress rehearsals" for the invasion of the Japanese home islands. Canadian public opinion was not keen on conscription for what was expected to be a campaign that would last several years.[4]

Bracken's riding was merged into the seat of Brandon before the 1949 federal election. He was soundly defeated by Liberal incumbent James Matthews, and did not return to political life thereafter. Though his leadership of the Tories was generally viewed as a failure, he would gain some small degree of vindication in his later years as his western populist policies would be employed more successfully by John Diefenbaker, who succeeded Drew as leader in 1956, gaining the party a power base in the western provinces that would reliably support them from the late 1950s until their fall as a party of government in 1993.

Bracken died on March 18, 1969, and is buried in Rideauvale Cemetery at Kars, Ontario.

There are John Bracken fonds at the Archives of Manitoba and Library and Archives Canada.[7]