Morales was born in Guatemala City, to José Everardo Morales Orellana and Celita Ernestina Cabrera Acevedo.[1] He comes from a circus family, and is an Evangelical Christian.[2][3] His father was killed in a car accident when he was three years old, prompting him, his mother and three siblings to move to his grandparents' home, where he grew up.[4] By the time he was 10 years old, he and his brother Sammy accompanied their grandfather to sell bananas and used clothing at the market in Santa Lucia.[5][6]

Morales rose to fame as a TV comedian, starring in the series Moralejas ("Morals") alongside his brother Sammy.[7] He formally changed his name from James Ernesto Morales Cabrera to Jimmy Morales by deed poll in 2011.[8]

Morales has been married for three decades to Hilda Patricia Marroquín, and has three children.[9][10]

In 2011, he ran as mayoral candidate in Mixco in the Guatemala City suburbs for the small right-wing Action for National Development party. He came in third.[9][11]

In 2013, Morales joined the small National Convergence Front (FCN/Nation), and became its Secretary-General.

In 2015, Morales was nominated as the FCN's presidential candidate. His priorities were fighting corruption, and dealing with chronic malnutrition, low education levels, and insecurity.[6] His slogan was "Neither corrupt, nor a thief" (Ni corrupto, ni ladrón).[2][3] He ran on a platform of conservative values, and against corruption.[3] He identifies as a nationalist, supports the death penalty, opposes abortion and legalized drugs, and denies that a genocide against the Ixil Maya took place.[12][13][7]

He was initially considered an outsider, but surprisingly led the field in the first round of the election, qualifying for a runoff alongside former First Lady Sandra Torres.[2] Morales' success came after both former vice president Roxana Baldetti and outgoing president Otto Pérez Molina had to step down, and were arrested on fraud and corruption charges (the La Línea corruption case).[2] 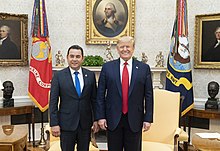 Morales with Donald Trump at White House in 2019.

In the runoff, Morales defeated Torres in a landslide, taking 67.4 percent of the vote.[14] Morales' success was viewed as a sign of the distrust of many Guatemalans towards the traditional political elite that ruled the country for decades. Voter anger and military support helped him win the presidency against more experienced politicians who voters felt were tainted by a corrupt political system.[2][3]

On December 24, 2017, Morales announced that he planned to move the Guatemalan embassy in Israel from Tel Aviv to Jerusalem. He became the second national leader to announce a decision to make such a move, after the President of the United States, Donald Trump, made a similar announcement on December 6.[15]

On June 18, 2018, the Morales government was widely criticized for its slow action in favor of Guatemalans affected by the American policy of separating immigrant families; this caused the dismissal of the presidential spokesman Heinz Heimann who a day before his removal from office said that the government respected the policy of President Trump.[16]

In January 2017, Morales' older brother and close adviser Samuel "Sammy" Morales, as well as one of Morales' sons, José Manuel Morales, were arrested on corruption and money laundering charges.[17][18] According to media reports, the arrests prompted several large protests of up to 15,000 people demanding for President Morales' removal. The most recent took place in September 2017. Morales refused to step down.[19][20][21][22]

In August 2017, Morales ordered the expulsion of Colombian Iván Velásquez, commissioner of the International Commission Against Impunity in Guatemala (CICIG), after it began "investigating claims that his party took illegal donations, including from drug-traffickers" and asked "congress to strip him of immunity from prosecution."[23][24] The Constitutional Court of Guatemala blocked the move.[24] Minister of foreign affairs Carlos Raúl Morales had refused to sign the executive order, and was removed from office along with viceminister Carlos Ramiro Martínez, and viceminister Anamaría Diéguez resigned.[25][26][27] Velásquez confirmed he will continue as CICIG commissioner following the Constitutional Court decision to block his expulsion.[24] In September 2017, the Congress of Guatemala refused to strip Morales of his immunity, rejecting commissioner Velásquez's suggestion.[28]

In September 2017, it was revealed that the Ministry of Defense, headed by Williams Mansilla, had been paying President Morales a $7,300 per month bonus since December 2016, in addition to his regular salary.[29] The payments from the defense ministry were referred to as a "Bonus for Extraordinary Responsibility."[29] Mansilla resigned from office soon after the payments were revealed to the public.[29] He was later arrested and charged with corruption in January 2018, relating to the special bonus to Morales.[29] President Morales denied the bonuses were illegal, but did return approximately $60,000 to the government.[29]

The acquisition by the government of services and luxury items for the president using public monies caused controversy, although he indicated not being personally involved in those expenses.[30]

Guatemalan Defense Minister Williams Mansilla confirmed on 22 April 2016 the deployment of 3,000 soldiers to the Guatemalan border with Belize, after a shooting incident on Belize territory with army weapons resulted in the death of a 13-year-old boy and the wounding of his 11-year-old brother, as well as their 48-year-old father.[32]