History of the Jews in Albania 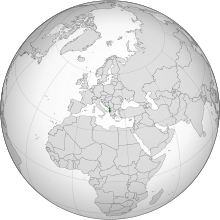 The location of Albania (dark green) in Europe

The history of the Jews in Albania dates back about 2,000 years. According to historian Apostol Kotani (Albania and the Jews):[1] "Jews may have first arrived in Albania as early as 70 C.E. as captives on Roman ships that washed up on the country's southern shores...descendants of these captives that would build the first synagogue in the southern port city of Sarandë in the fifth century...[but] Little is known about the Jewish community in the area until the 15th century."[2][3]

In the early 16th century, there were Jewish settlements in most of major cities of Albania such as Berat, Elbasan, Vlorë, Durrës and also they are reported as well in Kosovo region. These Jewish families were mainly of Sephardic origin and descendants of the Spanish and Portuguese Jews expelled from Iberia in the end of 15th century CE. Present-day Albanian Jews, predominantly of Romaniote[4][verification needed] and Sephardi origin, have in modern times only constituted a very small percentage of the population.

During the Italian and German occupation of Albania in World War II, Albania was the only Nazi-occupied country in Europe to see an increase in its Jewish population, as Albanian Jews were not turned over to the Germans thanks to an Albanian set of laws known as Besa from the Kanun.

During the communist dictatorship of Enver Hoxha, the Socialist People's Republic of Albania banned all religions, including Judaism, in adherence to the doctrine of state atheism, and restricted all foreign influence.[5] In the post-communist era, these policies have been abandoned and freedom of religion is permitted, although the number of practicing Jews in Albania is today very small, with many Jews having made aliyah to Israel.

First reports of Jews living in Albania date from the 70 CE, with it being thought that Jews first arrived on ships on the shores of southern Albania.[6] The descendants of these refugees, according to Albanian historian Apostol Kotani, would found Albania's first synagogue in the fourth[7] or fifth century, in the city of Onchesmos, modern day Saranda.[6] In sixth century Venosa (in Italy) there are references to Jews hailing from Onchesmos, which was also called Anchiasmos.[7][8] The synagogue in Onchesmos was supplanted by a Christian church in the sixth century.[7]

See also: Spanish Inquisition and Jews in the Ottoman Empire

In the 12th century, Benjamin of Tudela visited the area and recorded that there were Jews.[9]

In the thirteenth century, a Jewish community existed in Durrës and was employed in the salt trade.[10] In Vlorë during 1426, the Ottomans supported the settlement of a Jewish community involved in mercantile activities.[10] The Vlorë community underwent population growth in subsequent decades with Jews migrating from Corfu, Venetian ruled lands, Naples, France and the Iberian Peninsula.[10] The Ottoman state settled Jewish expellees in Vlorë toward the latter part of the fifteenth century following their expulsion and arrival from Spain.[10] The Spanish expulsions also resulted in the formation of a Jewish community in Ottoman Berat[11] that consisted of 25 families between 1519–1520.[10]

In 1501 following the establishment of Ottoman rule, the Durrës Jewish community experienced population growth, as did the Jewish population in Elbasan and Lezhë.[10] Ottoman censuses for 1506 and 1520 recorded the Jewish population as consisting of 528 families and some 2,600 people in Vlorë.[10] The Jews of Vlorë were involved in trade and the city imported items from Europe and exported spices, leather, cotton fabrics, velvets, brocades and mohair from the Ottoman cites of Istanbul and Bursa.[10]

Jews typically avoided settling in the city of Shkodra as unlike elsewhere in Albania, they perceived it to be the site of "fanatical" religious tensions, and the local rulers would not give them the same rights that Jews were receiving elsewhere in the Empire.[12]

It is thought that the beginning of the Jewish community in Elbasan was in 1501[13] but when Evliya Celebi visited the city he reported that there were no Jews, nor any "Franks, Armenians, Serbs or Bulgars"; Edmond Malaj argues that Celebi was simply unaware of the local Jewish neighborhood which existed in the city, which had its own Jewish market.[14]

After the Battle of Lepanto (1571) and the deterioration of security along the Ottoman controlled Adriatic and Ionian coasts, the numbers of Jews within Vlorë decreased.[10] The Berat and Vlorë Jewish communities took an active role in the welfare of other Jews such as managing to attain the release of war related captives present in Durrës in 1596.[10]

In 1673 the charismatic Jewish prophet Sabbatai Zevi was exiled by the sultan to the Albanian port of Ulqin, also called Ulcinj, now in Montenegro, dying there three years later.[15] Followers of Sabbatai Zevi existed in Berat among Jews during the mid sixteenth century.[10]

Vlorë was the site of Albania's only synagogue until it was destroyed in the First World War.

According to the Albanian census of 1930, there were only 204 Jews registered at that time in Albania. The official recognition of the Jewish community was granted on April 2, 1937, while at that time this community consisted in about 300 members. With the rise of Nazi Germany a number of German and Austrian Jews took refuge in Albania. Still in 1938 the Albanian Embassy in Berlin continued to issue visas to Jews, at a time when no other European country was willing to take them.[15] One of the major Albanologists Norbert Jokl asked for Albanian citizenship, which was granted to him immediately; but this could not save him from concentration camps.

Main article: The Holocaust in Albania

Albania had about 200 Jews at the beginning of the war.[17] It subsequently became a safe haven for several hundred Jewish refugees from other countries.[18][19] At the Wannsee Conference in 1942, Adolf Eichmann, planner of the mass murder of Jews across Europe, estimated the number of Jews in Albania that were to be killed at 200.[20] Nevertheless, Jews in Albania remained protected by the local Christian and Muslim[21] population and this protection continued even after the occupation of Albania by Nazi forces after the capitulation of Italy on September 8, 1943. At the end of the war, Albania had a population of 2,000 Jews. During the Second World War, Jews were concealed in the homes and basements of 60 families from the Muslim and Christian communities in Berat.[11]

Albania was the only European nation to have come out of the Second World War with a higher Jewish population at the end of the war than at the start of the war.[22][23]

Throughout Albania's communist rule under the dictatorship of Enver Hoxha, the Jewish community was isolated from the Jewish world, though this did not reflect specifically anti-Jewish measures. In order to forge sustainable national unity as well as the new socialism, Hoxha banned confessional loyalties across the religious spectrum. In this manner, the fate of the Jewish community was inextricably linked to the fate of Albanian society as a whole.

All religion was strictly banned from the country. After the fall of Communism in 1991, nearly all the Jews of Albania emigrated. They left primarily for economic reasons and not because of anti-Semitism. Some 298 Albanian Jews emigrated to Israel (mostly settling in Ashdod and Karmiel) and about 30 others moved to the United States. About a dozen Jews, most of whom married to non-Jews, chose to remain in Albania.[24]

Today, there are around 40 to 50 Jews living in Albania, most in the capital,[25] Tirana. An old synagogue was discovered in the city of Saranda[26][27] and a new synagogue known as "Hechal Shlomo" started providing services for the Jewish community in Tirana in December 2010. A synagogue remains in Vlorë, but is no longer in use. Also in December 2010, Rabbi Joel Kaplan was inaugurated as the first chief rabbi of Albania by the Prime Minister Sali Berisha and Chief Rabbi of Israel Shlomo Amar. A Jewish Community Centre named "Moshe Rabbenu" was also inaugurated in Tirana,[28] in total disaccordance with the Jewish community who denies Kaplan's status of chief rabbi.[29]

In the late 2010s, a Jewish history museum named "Solomon Museum" was established and is located in southern Berat containing exhibits about the Holocaust in Albania and the survival of Jews during the war in the country.[11]

In early July 2020, a Holocaust Memorial was unveiled in Tirana honouring Albanians who safeguarded Jews from Nazi persecution during the Second World War.[30] Among those in attendance were prime minister Edi Rama and the US and Israeli ambassadors.[30]