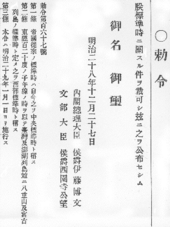 Japan Standard Time (Japanese: 日本標準時, Hepburn: Nihon Hyōjunji, [ɲihoɴ çoːdʑɯɰ̃dʑi], or 中央標準時, Chūō Hyōjunji, [tɕɯːoː çoːdʑɯɰ̃dʑi]), abbreviated as JST, is the standard time zone in Japan, 9 hours ahead of GMT (i.e. it is GMT+09:00).[1] There is no daylight saving time, though its introduction has been debated several times. During World War II, it was often called Tokyo Standard Time.

Before the Meiji era (1868–1912), each local region had its own time zone in which noon was when the sun was exactly at its culmination. As modern transportation methods, such as trains, were adopted, this practice became a source of confusion. For example, there is a difference of about 5 degrees longitude between Tokyo and Osaka and because of this, a train that departed from Tokyo would arrive at Osaka 20 minutes behind the time in Tokyo. In 1886, Ordinance 51 was issued in response to this problem, which stated:

Ordinance 51 (on the precise calculation of time using the Prime Meridian) – July 13, 1886 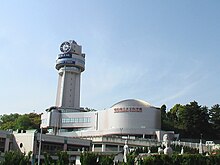 Western Standard Time, which was used in Taiwan and some parts of Okinawa, was abolished by Ordinance 529 in 1937 and replaced by Central Standard Time in those areas.[4] Territories occupied by Japan during World War II, including Singapore and Malaya, adopted Japan Standard Time for the duration of their occupation, but reverted after Japan's surrender.

In 1948–1951 occupied Japan observed daylight saving time (DST) from the first Sunday in May at 02:00 to the second Saturday in September at 02:00, except that the 1949 spring-forward transition was the first Sunday in April.[5] More recently there have been efforts to bring back DST in Japan, but so far this has not happened.[6][7]

In May 2013, former Tokyo governor Naoki Inose proposed permanently moving the country’s time zone ahead by 2 hours to better align global markets and make Japan’s stock market to be the first to open in the world at any given time.[8]

Time zones of the Japanese Empire

The two-time-zone system was implemented in Japan between January 1896 and September 1937:

From October 1937, Central Standard Time was also used in western Okinawa and Taiwan.

The IANA time zone database contains one zone for Japan in the file zone.tab, named Asia/Tokyo.

From 1948 to 1952, Japan observed daylight saving time (DST) between May and September every year. The United States imposed this policy as part of the Allied occupation of Japan. In 1952, three weeks before the occupation ended, the Japanese government, which had been granted increased powers, abolished daylight saving time, and the Allied occupation authorities did not interfere.[9] Since then, DST has never been officially implemented nationwide in Japan.[10]

Starting in the late 1990s, a movement to reinstate DST in Japan gained some popularity, aiming at saving energy and increasing recreational time. The Hokkaido region is particularly in favor of this movement because daylight starts as early as 03:30 (in standard time) there in summer due to its high latitude and its location near the eastern edge of the time zone, with much of the region's solar time actually closer to GMT+10:00. Because of this, the sun sets barely after 19:00 in much of the eastern part of the country (in Tokyo, the latest sunset of the entire year is 19:01, from June 26 to July 1, despite being at 35°41'N latitude). After 2000, a few local governments and commerce departments promoted unmandated hour-earlier work schedule experiments during the summer without officially resetting clocks.[11]

The Council on Economic and Fiscal Policy of the Cabinet Office is expected[when?](written October 2013) to propose that the Japanese government begin studying DST in an attempt to help combat global warming. Japanese Prime Minister Shinzō Abe made a significant effort to introduce daylight saving time, but was ultimately unsuccessful.[12] However, it is not clear that DST would conserve energy in Japan. A 2007 simulation estimated that introducing DST to Japan would increase energy use in Osaka residences by 0.13%, with a 0.02% saving due to lighting more than outweighed by a 0.15% increase due to cooling costs; the simulation did not examine non-residential buildings.[13]