Jammu and Kashmir[b] is a region administered by India as a union territory, and constituting the southern portion of the larger Kashmir region, which has been the subject of a dispute between India and Pakistan since 1947, and between India and China since 1962.[14][15] The region of Jammu and Kashmir is separated by the Line of Control from the Pakistani-administered territories of Azad Kashmir and Gilgit-Baltistan in the west and north respectively. It lies to the north of the Indian states of Himachal Pradesh and Punjab and to the west of Ladakh, which is also subject to the dispute as a part of Kashmir, and administered by India as a union territory.

Jammu and Kashmir is named after the two regions it encompasses – the Jammu region and the Kashmir Valley.

Jammu and Kashmir had three distinct areas: Hindu-majority Jammu region, Muslim-majority Kashmir Valley and Buddhist-dominated Ladakh.[24] Unrest and violence persisted in the Kashmiri Valley and, following a disputed state election in 1987, an insurgency persisted in protest over autonomy and rights.[24][25]

The Bharatiya Janata Party (BJP) came to power in the 2014 Indian general election and five years later included in their 2019 election manifesto the revocation of Article 370 of the Constitution of India, in order to bring Jammu and Kashmir to equal status with other states.[24]

A resolution to repeal Article 370 was passed by both the houses of the Parliament of India in August 2019. At the same time, a reorganisation act was also passed, which would reconstitute the state into two union territories, Jammu and Kashmir and Ladakh.[26] The reorganisation took effect from 31 October 2019.[16] 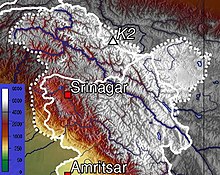 Topographic map of Jammu and Kashmir, with visible altitude for the Kashmir valley and Jammu region.

Jammu and Kashmir is home to several valleys such as the Kashmir Valley, Tawi Valley, Chenab Valley, Poonch Valley, Sind Valley and Lidder Valley.[27] The Kashmir valley is 100 km (62 mi) wide and 15,520.3 km2 (5,992.4 sq mi) in area.[28] The Himalayas divide the Kashmir valley from the Tibetan plateau while the Pir Panjal range, which encloses the valley from the west and the south, separates it from the Great Plains of northern India.[29] Along the northeastern flank of the Valley runs the main range of the Himalayas.[30] This valley has an average height of 1,850 metres (6,070 ft) above sea-level,[28] but the surrounding Pir Panjal range has an average elevation of 10,000 feet (3,000 m).[31] The Jhelum River is the major Himalayan river which flows through the Kashmir valley.[32] The Tawi, Ravi and Chenab are the other important rivers flowing through the region.[33] 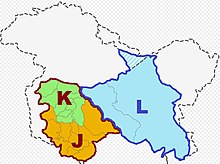 The union territory of Jammu and Kashmir consists of two divisions: Jammu Division and Kashmir Division, and is further divided into 20 districts.[34]

The President of India appoints a Lieutenant Governor for the union territory.[35]

Elections for the Jammu and Kashmir Legislative Assembly are to be held following the implementation of new constituency boundaries which is expected to be completed in 2021.[36]

Jammu and Kashmir in the Parliament of India

Jammu and Kashmir sends five members (MPs) to the lower house of the Indian parliament (the Lok Sabha) and four members to the upper house (the Rajya Sabha).

Jammu and Kashmir is home to several valleys such as the Kashmir Valley, Chenab Valley, Sindh Valley and Lidder Valley. Some major tourist attractions in Jammu and Kashmir are Srinagar, the Mughal Gardens, Gulmarg, Pahalgam, Patnitop and Jammu. Every year, thousands of Hindu pilgrims visit holy shrines of Vaishno Devi and Amarnath which has had significant impact on the state's economy.[38]

The Kashmir valley is one of the top tourist destinations of India.[39] Gulmarg, one of the most popular ski resort destinations in India, is also home to the world's highest green golf course.[40] The decrease in violence in the state has boosted the state's economy, specifically tourism.[41]

Jammu and Kashmir is also famous for its scenic beauty, flower gardens, apple farms and more. It attracts tourists for its unique handicrafts and the world-famous Kashmiri Shawls.