James Bicheno Francis (May 18, 1815 – September 18, 1892) was a British-American civil engineer, who invented the Francis turbine. 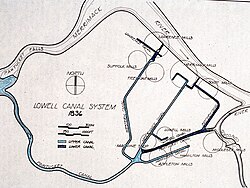 James Francis was born in South Leigh, near Witney, Oxfordshire in England, United Kingdom. He started his engineering career at the early age of 14 as he worked as his father's apprentice at the Port Craw Railway and Harbor Works in South Wales.[1] When he turned 18, he decided to emigrate to the United States, in 1833. His first job was in Stonington, Connecticut as an assistant to the railway engineer George Washington Whistler Jr., working on the New York and New Haven Railroad. A year later, James and his boss, Whistler, travelled north to Lowell, Massachusetts,[2] where at the age of 19, he got a draftsman job with the Locks and Canal Company, and Whistler became chief engineer.

A few years later, in 1837, G.W. Whistler resigned, and went to work on Russia's major railroads. Before departing, Whistler appointed Francis to Chief Engineer, and sold him his house on Worthen street. That same year, James married Sarah W. Brownell in Lowell on July 12, 1837.[3] Their first son, James Jr. was born March 30, 1840, and then they had five more children.

In 1841 came his first major project for the company. Francis was to analyse how much water each mill factory was using from the company's channel system. Impressed by his abilities, the company named him "Manager of Locks and Canals" in 1845.[1]

As Manager & Chief Engineer, Francis was responsible for the construction of the Northern Canal and Moody Street Feeder. These two canals, built in the late 1840s and early 1850s, completed the 5.6 mile long Lowell canal system, and greatly increased its industrial power of the thriving industrial city's mill complexes.

Their son James fought in the American Civil War as a second lieutenant in 1861. He was wounded in the hand at the Battle of Antietam as a captain, and finished the war in July 1865 as lieutenant colonel.[4]

In 1845, James Francis developed the first sprinkler systems ever devised in the United States.[5] However, any use of the system would flood the entire structure and all its contents. It was not until 1875 that Henry Parmelee invented a sprinkler head that activated only one head at a time.[6]

James also became fascinated with and tinkered with turbine designs, after Uriah A. Boyden first demonstrated his Boyden turbine in Lowell. The two engineers worked on improving the turbine. And in 1848, Francis and Boyden successfully improved the turbine with what is now known as the Francis turbine. Francis's turbine eclipsed the Boyden turbine in power by 90%. In 1855, Francis published these findings in the "Lowell Hydraulic Experiments".[7]

In 1850, he also ordered the construction of the Great Gate over the Pawtucket Canal to protect the downtown mills from any devastating floods. This project quickly became known as "Francis's Folly", given that no one believed it would work, let alone ever be needed. But less than two years later, in 1852, the gates saved the city of Lowell from the devastating floods of 1852, and again in 1936, 1938, 2006, and 2007 by preventing the Merrimack River from entering the canal system. However, arson damage to the wooden gate in the 1970s, and the difficult method of dropping it (by breaking a large chain link) prompted the city to use a more modern steel-beam bulkhead in its place in 2006. For his efforts in saving the city from great disaster Mr. Francis was awarded a massive silver pitcher and a salver by the City of Lowell.[8]

In 1886, James B. Francis teamed up with two other civil engineers; Eliot C. Clarke and Clemens Herschel to study and publish their findings in the "Prevention of Floods in the Valley of Stony Brook" which laid out a flood prevention system for the city of Boston. The intense study reviewed the Forest Hills, Hyde Park, Franklin park and Roslindale sections of the city that were subject to flooding.[9]

Francis stayed active on all levels of involvement in the city of Lowell, and even served as an Alderman from 1862 to 1864.[10]

In 1865, James researched and publish his findings on cast iron, and their use as structural columns in; "The Strength of Cast-Iron Columns."

In 1874, Francis served on the American Society of Civil Engineers committee to investigate the cause of the breach of the Mill River dam in Massachusetts.[11]  Also on the committee were engineers Theodore Ellis and William Worthen. The investigation proceeded quickly and their report was published within a month of the disaster. They concluded that no engineer was responsible for the design and that it was the “work of non-professional persons.” “The remains of the dam indicate defects of workmanship of the grossest character.”[12]

Francis also originated scientific methods of testing hydraulic machinery, and was a founding member of the American Society of Civil Engineers and its president in 1880.

In 1883, James completed his calculation standards for water flow rates, now known as the Francis equation or Francis Formula, usually used in fluid dynamics in conjunction with calculating weirs. The equation is

where Q is the discharge in cubic feet per second over the weir, L is the length of the weir in feet, and h1 is the height of the water above the top of the weir.[13][14][further explanation needed]

He remained at the Locks and Canal Company for his entire career, until retirement in 1884 at the age of 69, and remained on as a consultant right up until his death. His son James took over as Chief Engineer. The rest of his life he spent with his wife Sarah, and their six children in their home on Worthen Street, which was Whistlers old home and now the Whistler House Museum of Art.

In 1889, Francis was also called to duty as a member of the ASCE committee to examine the cause of the Johnstown, PA disaster, when the South Fork Dam broke, killing over 2,200 people.[8][15]  Although the report was completed by January 1890, it was immediately suppressed and not released to other ASCE members or the public until mid-1891, two years after the 1889 flood.[16]  Francis himself presented the results of the investigation at the ASCE convention in Chattanooga, TN.  The other three committee members did not attend.  Although Francis’ name headed the report, the de facto chairman of the committee was Max Becker, a railroad engineer based in Pittsburgh with virtually no experience in dams or hydraulic engineering.  According to James Francis, it was Becker who delayed the release of the report.  A detailed discussion of the South Fork investigation, the participating engineers, and the science behind the 1889 flood was published in 2018.[17]

Francis died on September 18, 1892, at the age of 77, and is buried at Lowell Cemetery under a massive pillar of cut granite stones, symbolizing the stones used to make the canals.[18]

For all his contributions to the world of engineering and personal generosity, the following are named in his honor:

Notable uses of the Francis turbine 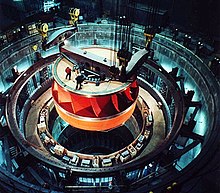 A Francis turbine runner, rated at nearly one million hp (750 MW), being installed at the Grand Coulee Dam, United States.