The Jaguar AJ-8 is a compact DOHC V8 piston engine used in many Jaguar vehicles. It was the fourth new engine type in the history of the company. In 1997 it replaced both designs previously available on Jaguar cars: the straight-6 Jaguar AJ6 engine (or rather its AJ16 variant), and the Jaguar V12 engine. It remained the only engine type available on Jaguar until 1999 with the launch of the S-Type, when the Jaguar AJ-V6 engine was added to the list. The AJ-V8 is available in displacements ranging from 3.2L to 5.0L, and a supercharged version is also produced. Ford Motor Company also used this engine in other cars, including the Lincoln LS and the 2002-2005 Ford Thunderbird, as well as in several Land Rovers, and the Aston Martin V8 Vantage.

The AJ-V8 was designed to use Nikasil-coated cylinders rather than the more-common iron cylinder liners. However, like the BMW M60, high-sulphur fuel reacted with the Nikasil coating and caused engine failures. Jaguar replaced affected engines, and has used conventional cast-iron linings ever since.

The engine originally used a two-state Variable Valve Timing system to switch the intake cam timing by 30°. Newer variants use a more sophisticated system which can vary intake timing incrementally up to 48°. The Lincoln version was made in the United States.

Ford will cease production of the AJ-V8 engine in September 2020 when it closes the Bridgend Plant[1].

The AJ8 engine is manufactured in an all-new, dedicated Jaguar facility located within the Ford Bridgend Engine Plant in Bridgend, South Wales. The Jaguar "plant-within-a-plant" saved considerable investment costs by Jaguar. It is staffed by workers dedicated to Jaguar engine production and includes a linked flow-line of computer numerically controlled machines with automated loading and assembly. Component supply is on a "just-in-time" basis.[2][3][4][5]

The supercharged version of the AJ26 is used in the high-performance R versions of Jaguar's cars. The engine was updated with AJ27 specifications for 2000. It produces 370 hp (276 kW; 375 PS) and 387 lb⋅ft (525 N⋅m) with the help of an Eaton supercharger (modified Roots-blower). The supercharged engine did not use variable cam timing as the normal benefits of improved volumetric efficiency are not noticeable on a boosted engine.

Vehicles using the supercharged version include:

The 3.9 L (3,934 cc) AJ30/AJ35 variant is a unique displacement used only by Ford and Lincoln and is built in Ford's Lima, OH engine plant. Bore and stroke is 86 mm × 85 mm (3.39 in × 3.35 in). The AJ35 version introduced for the 2003 model year added variable valve timing of the intake camshafts and electronic throttle control. While the block, crankshaft, pistons, and connecting rods are all unique to this displacement, many other parts are shared with the AJ-V8 engines produced in the UK by Jaguar.

Land Rover also offered a supercharged version of the 4.2 L as that company's high-performance engine. Land Rover's version is not the same as the Jaguar's version but it was adapted from it.[6] 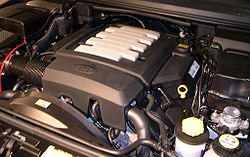 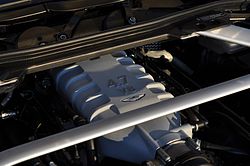 The engine is controlled by Denso's Generation 1.6 Engine Management System.

The Bowler Nemesis and David Brown Speedback Silverstone Edition also use a variant of this engine producing 600 PS (441 kW; 592 hp).

The AJ126 V6 utilizes a AJ133 V8 engine block with the rear two cylinder bores blanked, and reduced bore sizes on the remaining six cylinders.[8] While the engine block is the same size as the V8, the cylinder heads are shortened versions of the V8 heads. It is made on the same production line as the AJ133.

The main structural components of the engine are all manufactured from aluminum alloy. The engine is built around a very stiff, lightweight, enclosed V, deep skirt cylinder block. A structural windage tray is bolted to the bottom of the cylinder block to further improve the block stiffness, minimize NVH (noise, vibration and harshness) and help reduce oil foaming. To further enhance the stiffness of the lower engine structure, a heavily ribbed sump body is installed. The sump body also helps to reduce engine noise.

The four camshafts incorporate VCT (variable camshaft timing). VCT allows the timing of the intake and exhaust valves to be adjusted independently of each other. The VCT system is controlled by the Bosch ECM (engine control module) using information from CMP (camshaft position) sensors.The crankshaft features offset journals and a counterweight in place of the deleted pistons and rods.

The supercharger is located in the 'vee' of the engine and is driven from the crankshaft by a dedicated secondary drive belt.

Jaguar will be replacing the AJ-126 with an all new Ingenium turbocharged inline-6 engine.