Jönköping County (Swedish: Jönköpings län) is a county or län in southern Sweden. It borders the counties of Halland, Västra Götaland, Östergötland, Kalmar and Kronoberg. The total county population was 356,291 inhabitants in September 2017. The capital and largest city is Jönköping. About one quarter of the total county population lives in the combined Jönköping-Huskvarna urban area around the southern point of Lake Vättern.

Habo Municipality and Mullsjö Municipality, from the south-eastern part of the historical province of Västergötland, are since the dissolution of Skaraborg County in 1998 also part of Jönköping County; both municipalities joined Jönköping County as the results of local referendums in 1997.

View towards the Jönköping County Administrative Board headquarters in Jönköping.

The main aim of the County Administrative Board is to fulfill the goals set in national politics by the Riksdag and the Government, to coordinate the interests and promote the development of the county, to establish regional goals and safeguard the due process of law in the handling of each case. The County Administrative Board is a Government Agency headed by a Governor. The seat of residence for the Governor or Landshövding is the city of Jönköping. See the list of Jönköping Governors.

The main responsibilities of the County Council of Jönköping, or Landstinget i Jönköpings län, are the regional public healthcare system and public transport. The County Council Assembly (landstingsfullmäktige), which is the elected body for regional municipal issues, is elected every four years concurrently with the Riksdag elections.

The county's best-known parliamentary representative was the late Olof Palme, leader of the Swedish Social Democratic Party from 1969 to 1986, and twice Prime Minister of Sweden from 1969 to 1976 and from 1982 to 1986.

Jönköping County is the strongest electoral region of the Christian Democrats, who traditionally have a large following among members of evangelical churches in the region. The County Council Assembly and most of the municipalities in the county are governed by liberal-conservative, center-right coalitions. The Social Democrats have historically been strong in mill towns and industrial districts of Jönköping County. 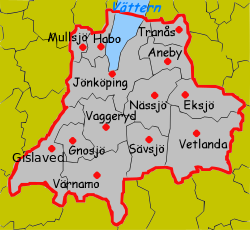 Localities in order of size

The ten most populous localities of Jönköping County in 2010:[2]