Italy-Turkey relations refer to relations between Italy and Turkey. Both countries are members of NATO and the Union for the Mediterranean and have active diplomatic relations. 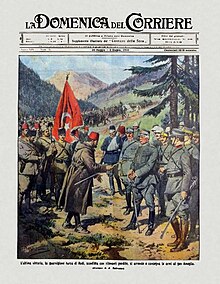 16 May 1912: surrender of the Turkish garrison in Rhodes to the Italian general Ameglio near Psithos.

Turkey, then the Ottoman Empire, begun its first diplomatic mission to Italy in 1856, shortly before the establishment of the Kingdom of Italy, by sending Ambassador Rüstem Pasha.[1] Since then, Turkey has had a constant presence in Italy throughout both their embassy in Rome and their consulates in Milan and Naples.[2]

In 1902, a diplomatic crisis between Italy and the Ottoman took place. The crisis began due to the Ottomans failing to prevent attacks by Turkish Arabs on Italian sambuks. When the Ottoman Empire refused to take precautions to prevent these attacks after repeated Italian threats, Italian warships bombarded Port Midi from 31 October onwards. On 10 November, the Ottoman Empire capitulated and agreed to take measures to curb piracy as well as pay an indemnity, ending the crisis.[3]

From 1911 to 1912, Italy and the Ottoman empire fought a war over the Turkish provinces of Tripolitana and Cyrenaica, with the former emerging as the victor.[4]

Italy's presence in Turkey now consists of an embassy in Ankara, a General Consulate in İstanbul, and a consulate in İzmir, together with honorary consulates in Antalya, Bursa, Gaziantep, İskenderun, and Nevşehir, and a Consular Correspondent in Eskişehir.[5]

Italian Foreign Minister Luigi Di Maio condemned the 2019 Turkish offensive into north-eastern Syria, declaring that the offensive against Kurdish forces in Syria is "unacceptable" and calling for an immediate end to the fighting.[6] Italy joined an arms embargo against Turkey, despite previously being Turkey's primary EU weapons supplier.[7][8]

Istanbul is home to one of the Italian Cultural Institutes opened throughout the world by the Italian Ministry of Foreign Affairs.[9] The Institute, among other cultural activities, offers Italian language courses, also offered by a number of Turkish universities, such as Ankara University and Istanbul University.[10]

İzmir and Ankara are hosts to, respectively, the Italian Culture Center "Carlo Goldoni"[11] and the Italian Friendship Association "Casa Italia".[10] Both of these associations engage in the organisation of events promoting Italian culture and of courses teaching the Italian language.

A number of Italian schools are present in Turkey, with the great majority of them being located in Istanbul. Italian schools in Turkey include kindergartens, elementary, middle, and high schools.[10]