Felipe González and Giuliano Amato during the 1993 Italian-Spanish Summit

In 218 BC the Romans invaded the Iberian peninsula, which later became the Roman province of Hispania. The Romans introduced the Latin language, the ancestor of both modern-day Spanish and Italian. The Iberian peninsula remained under Roman rule for over 600 years, until the collapse of the Western-Roman Empire.

In the Early modern period, until the 18th century, southern and insular Italy came under Spanish control, having been previously a domain of the Crown of Aragon.

After the proclamation of Victor Emmanuel II as King of Italy in 1861 Spain failed to initially recognise the country, still considering Victor Emmanuel as the "Sardinian King".[1] The recognition was met by the opposition of Queen Isabella II of Spain, influenced by the stance of Pope Pius IX.[2] Once Leopoldo O'Donnell overcame the opposition of the Queen, Spain finally recognised the Kingdom of Italy on 15 July 1865.[3] Soon later, in 1870, following the dethronement of Isabella II at the 1868 Glorious Revolution, the second son of Victor Emmanuel II, Amadeo, was elected King of Spain, reigning from 1871 until his abdication in 1873.

Despite some incipient attempts to promote further understanding between the two countries, immediately after the end of World War I there were still issues restraining further Italian-Spanish engagement in Spain, including a sector of public opinion showing aversion towards Italy (a prominent example being Austria-born Queen Mother Maria Christina).[4]

Alfonso XIII and Victor Emmanuel III during the visit of the former with Primo de Rivera to Italy in November 1923.

Once dictators Benito Mussolini (1922) and Miguel Primo de Rivera (1923) got to power, conditions for closer relations became more clear, with the notion of a rapprochement to Italy becoming more interesting to the Spanish Government policy, particularly in terms of the profit those improved relations could deliver to Spain vis-à-vis the Tangier question (with France conversely antagonising Spain on this issue).[4] For Italy, the installment of the dictatorship in Spain offered a prospect for greater cultural ascendancy over a country with a government now widely interesed in the reforms carried out in Italy.[5] The diplomatic relations between the two countries often became entangled in the wider triangular diplomacy that also included France. While showing a will for friendship and rapprochement, the "Treaty for Conciliation and Arbitration" signed in August 1926 between the two countries delivered limited substance in practical terms, compared to the expectations at the starting point of the Primorriverista dictatorship.[6] A diplomatic "honeymoon" between the two regimes followed the signing of the treaty, nonetheless.[7] 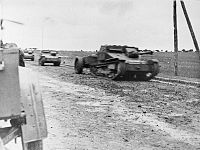 Italian tankettes advancing with a flame thrower tank during the battle of Guadalajara.

Meanwhile, fascism emerged in Spain, including its charismatic leader, José Antonio Primo de Rivera (1903–36), who believed that Italian Fascism, as personified by Mussolini, was the perfect model. After his execution by Spanish republican forces in 1936, Francisco Franco became the leader of the Falange Party, as well as chief of state and commander of the armed forces. He was not a charismatic fascist leader in the manner of Primo de Rivera or Mussolini, but he did come to personify the mission of the Falange. Franco did not allow the Falange to control his actions—rather he controlled it until his death in 1975.[8] In 1936 Mussolini intervened on the side of Francisco Franco and the Spanish Nationalists during the Spanish Civil War, helping Franco win. The Corps of Volunteer Troops, a fascist expeditionary force from Italy, brought in about 75,000 Italians combat and support troops.

During World War II, 1939 to 1943, Spanish-Italian ties were close, though Italy fought alongside Germany and Spain avoided that. In February 1941, the meeting between Mussolini and Franco in Bordighera took place; during the meeting the Duce asked Franco to join the Axis.[9] After Mussolini fell in 1943, Italy was ripped apart in its own civil war, and Spain stayed away;[10] From 1943 onwards, both the Kingdom of Italy and the Italian Social Republic aimed to maintain good diplomatic relations with Francoist Spain; those attempts for rapprochement were however aborted by Spain in order to ensue the balance in its relation with both countries as well as with the rest of belligerent powers.[11]

Both countries are full members of NATO, the Union for the Mediterranean, European Union, and the Eurozone.