Both countries are full members of NATO and of the European Union. As of December 2017, there are around 1,168,552 people of Romanian descent living in Italy, being considered the largest foreign community in the country.[3] 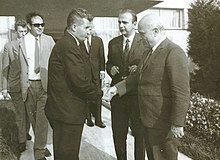 Relations between Italy and Romania have traditionally been close due to a shared Latin identity and similar languages. During World War I, both countries fought the Austro-Hungarian Empire, and during World War II, contributed hundreds of thousands of troops to the Eastern Front where many died fighting the Soviets. More recently, after the collapse of the Soviet bloc, over a million Romanians moved to Italy for work and better living conditions.

Several Italian banks are operating in Romania: Banca Italo Romena, Intesa Sanpaolo Bank and UniCredit Bank. The latter, had been in a partnership with Romanian former tennis player and business man Ion Ţiriac, between 2008 and 2015.[4]