Italy–Poland relations are cultural and political relations between Italy and Poland. Due to strong connections between both, such as the Roman Catholic religion and historical similarities, many referred the relationship as Polish–Italian brotherhood.

Bona Sforza, member of the powerful Milanese House of Sforza, in 1518 became the second wife of Sigismund I the Old. Planning to give the Jagiello family financial independence, she succeeded in taking over the Grand Duchy of Lithuania in 1536–1546. She is also commonly credited with the introduction of salads and vegetables in Polish cuisine (still sometimes called włoszczyzna, i.e. Italian).

Renaissance in Poland started spreading in the 15th and 16th centuries. This was a result of Italian artists (Francesco Fiorentino, Bartholommeo Berecci, Santi Gucci, Mateo Gucci, Bernardo Morando, Giovanni Battista di Quadro, etc.), merchants (the Boner family, the Montelupi family)[3] and thinkers (Filip Callimachus) who had come to Poland since the late 15th. Most of them came to Kraków, the Polish capital until 1611. Polish scientists and poets studied in Italy: Nicolaus Copernicus in Bologna, Witelo, Jan Kochanowski and Klemens Janicki at the University of Padua. Bernardo Morando designed Zamość, Tomaszów Lubelski and a number of buildings.

Bernardo Bellotto, known in Poland and Germany as Canaletto (1697–1768) was a Venetian painter who painted 26 views of Warsaw, which were used in rebuilding the city after its near-complete destruction by German troops during World War II. Giacomo Casanova visited Poland in 1766.[4] Later, Alessandro Cagliostro arrived.

Antonio Corazzi (1792–1877) was an Italian architect who designed a number of buildings in Warsaw, including Staszic Palace (1820) and Teatr Wielki.

In the Napoleonic period, many Polish soldiers, officers and volunteers therefore emigrated, especially to Italy and France. They formed the Polish Legions, considered a Polish army in exile, under French command. Their Polish commanders included Jan Henryk Dąbrowski, Karol Kniaziewicz, Józef Wybicki and Antoni Amilkar Kosiński. It was then that the future Polish national anthem, Mazurek Dąbrowskiego, was created by Józef Wybicki, with words promising 'the return of the Polish army from Italy to Poland'. In tribute, the Italian anthem, Il Canto degli Italiani, mentioned about the Polish sacrifice against Austrian and Russian oppressions on Poles, "il sangue Polacco".

Parts of today's Poland and Italy belonged for a long time to Austria-Hungary, being subject to the Crown of Saint Stephan. The Imperial Royal Austrian State Railways allowed to travel between Kraków and Trieste.

The Mickiewicz's Legion was a military unit formed in 1848 in Rome by one of the most notable Polish poets, Adam Mickiewicz, to take part in the liberation of Italy after the failure of the Greater Poland Uprising of 1848. After unsuccessfully pleading Pope Pius IX for support, Mickiewicz was joined in Milan by a military detachment of Polish emigrants, led by Mikolaj Kaminski. Growing to 120 members by June, the legion, commanded by Kaminski, engaged in several battles. They fought alongside others in Lombardy and on barricades of Genoa against the royalists, in the defence of the Roman Republic.[5]

The Garibaldi Legion was a unit of Italian volunteers who fought for Polish independence in the January Uprising of 1863. The unit was named after the Italian revolutionary and nationalist Giuseppe Garibaldi, organized in Italy by his son Menotti Garibaldi and led by the general Francesco Nullo. Nullo arrived in Kraków from Italy in April 1863. The unit's first battle in Poland was at Podłęże on May 3, 1863 where it defeated a Russian force. Subsequently, it took part in the Battle of Krzykawka, where along with the French organized Zouaves of Death it suffered heavy casualties; Nullo was killed and his adjutant mortally wounded, dying several days later. Francesco Nullo is considered an independence hero in both Italy and Poland.

In 1918, Italy was the first country in Europe to recognise Poland’s sovereignty. The Italian anthem (Il Canto degli Italiani) and the Polish anthem (Poland Is Not Yet Lost) bear mutual historical references, a unicum in the history of National anthems in the world.

Polish II Corps participated in the Italian Campaign. 11,379 men died, many of them buried at the Monte Cassino Polish War Cemetery or at Casamassima. Meanwhile, despite little contact between Italians and Poles throughout the war, the Italian Army was believed to be among the nicest toward Poles, and had never treated Poles brutally like their German counterparts. A group of Italian soldiers even refused to continue fighting, leading to mass executions of Italian soldiers in Poland. This event has become a symbol of the strong Italian–Polish friendship.[6] 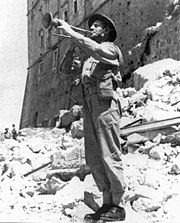 The Battle of Monte Cassino, a Polish bugler plays the Hejnał mariacki, announcing the victory

Polish writer Gustaw Herling-Grudziński settled in Naples, where he married Lidia, a daughter of the philosopher Benedetto Croce. He also wrote for the Italian "Tempo presente" run by Nicola Chiaromonte, and for various dailies and periodicals. His book A World Apart: Imprisonment in a Soviet Labor Camp During World War II was published in Italy in 1958. Polish journal Kultura was originally published in Rome. Polish writer Jarosław Iwaszkiewicz has written several texts about Italy, among others a book "Italian Novellas" and libretto of King Roger, an opera by Karol Szymanowski.

Polish–Italian 1946 movie Wielka droga was the only uncensored Polish movie until 1989. Polish comedy "Giuseppe in Warsaw" presents adventures of an Italian soldier in Nazi occupied Warsaw.

In June–December of 1966, Italian and Polish diplomats bore a joint effort to reach a compromise solution to the Vietnam War, thanks to the Italian ambassador in Saigon, Giovanni D'Orlandi, and his Polish counterpart, Janusz Lewandowski (member of the International Control Commission), in the so-called Operation Marigold. The Marigold peace efforts were supported by the Italian foreign minister Amintore Fanfani. The final compromise reached between D'Orlandi and Lewandowski in September included: free elections under international control before 2 years; a South Vietnam government including representatives of the extreme parts (general Ky and the NLF), and keeping to a policy of neutrality; a final withdrawal of the American troops. The peace efforts were halted by the reprise of the American bombing over Hanoi on December 2 and 4, 1966.[8]

In 1978, the Pole Karol Wojtyla was elected as Catholic Pope, the first non-Italian pope since the 16th century.

Italian singers Farida, Drupi, Marco Antonelli, and In-Grid have been popular in Poland, sometimes more so than in Italy. Polish songwriter and singer Czesław Niemen performed in Italy in 1969 and 1970, participating in Cantagiro and producing several singles in Italian, e.g. "Arcobaleno" (Over the Rainbow).

The Day of the Siege: September Eleven 1683 is a Polish–Italian movie directed by Renzo Martinelli about the Battle of Vienna.

In 2003, both countries supported the Invasion of Iraq by a US-led coalition. Poland took part in the invasion operations, Italy only in the post-invasion occupation of Iraq.

In 2019, Italian Deputy Prime Minister Matteo Salvini arrived in Warsaw to discuss a political alliance between the two nations ahead of the upcoming 2019 European Parliament election.[9][10][11] This idea was met with "satisfaction" from Jarosław Kaczyński, Poland's ruling party leader.[12] 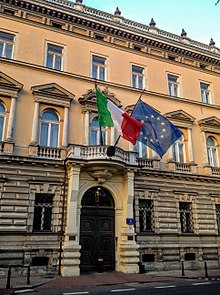 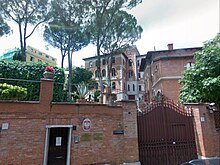