Villa Bel Air in Ta' Xbiex, residence of the Italian ambassador to Malta

Malta and the Italian peninsula have a long history of relations given their proximity. Malta was part of the Normans' Kingdom of Sicily and remained associated with the Italian kingdom until 1194.[1] The Kingdom of Naples would be involved in the war against the French occupation of the island. In 1800 Malta became a protectorate jointly administered by Naples and the United Kingdom, although the latter had more influence. By 1813 the island became a British colony and thus moved outside the Italian sphere, although the presence of Italian culture and language remained strong. Indeed, Italian designs on the island were highlighted in April 1933, when on a visit to the island, Italian cabinet undersecretary Francesco Giunta stated that he was on Italian soil and that the future of the island lay in complete union with Italy.[2] The two countries clashed during World War II when Italy bombed the island during the Siege of Malta. In sum, because Malta rejected Mussolini's fascism and Nazi support, as well as Italy bombing Malta for three years between 1940 and 1943. 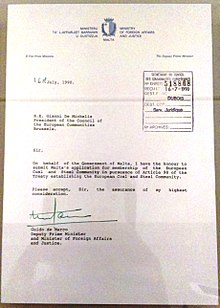 Italy was the first country to establish a diplomatic mission in Malta and the first to appoint a resident ambassador (since then resident at Villa Bel Air in Ta' Xbiex) after Malta achieved independence and became a full member of the UN. On December 1, 1964, that the first Italian ambassador presented his credentials to the governor general, Sir Maurice Dorman.[3]

In 1980, Malta entered into a neutrality agreement with Italy, under which Malta agreed not to enter into any alliance and Italy agreed to guarantee Malta's neutrality.[4] Malta's relations with Italy have been described as "generally excellent".[5]

Both countries are members of the European Union and of the Union for the Mediterranean.

Notable contemporary persons with double citizenship of Italy and Malta

Italian Air Force AB 212 at the 2015 Malta International Airshow. Italian search and rescue helicopters have been stationed in Malta since 1982