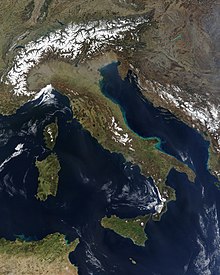 Satellite view of the peninsula in March 2003.

The Italian Peninsula, also known as the Italic Peninsula or the Apennine Peninsula, is a peninsula extending from the southern Alps in the north to the central Mediterranean Sea in the south. It is nicknamed lo Stivale (the Boot). Three smaller peninsulas contribute to this characteristic shape, namely Calabria (the "toe"), Salento (the "heel") and Gargano (the "spur"). The backbone of the Italian Peninsula consists of the Apennine Mountains, from which it takes one of its names. The peninsula comprises much of Italy, and also includes the microstates of San Marino and Vatican City and the extraterritorial sovereign territory of the Sovereign Military Order of Malta.

Minimum extent of the Italian Peninsula in dark green.

Geographically, the minimum extent of the Italian Peninsula consists of the land south of a line extending from the Magra to the Rubicon rivers, north of the Tuscan–Emilian Apennines. It excludes the Po Valley and the southern slopes of the Alps.[1][2]

All of these territories lie within the Italian Republic except for the microstates of San Marino and Vatican City:

The peninsula has mainly a Mediterranean climate, though in the mountainous parts the climate is much cooler. Its natural vegetation includes macchia along the coasts and deciduous and mixed deciduous coniferous forests in the interior.