An Italian-Mexican or Italo-Mexican (Spanish: italo-mexicano, Italian: italo-messicano) is a Mexican citizen of Italian descent or origin. The ancestors of most Mexicans of Italian descent arrived in the country during the late 19th century. Their descendants have generally assimilated into mainstream Mexican society.

First Lady Margarita Maza, wife of Benito Juárez, was the daughter of a Genoese immigrant.

During the colonial era there was a small number of non-Spanish European entrants, in particular Catholic missionaries. There are records of a few Italian soldiers and mariners in early New Spain.[2] Prominent among the Italians was Juan Pablos (born Giovanni Paoli in Brescia), who founded the first printing shop in the Americas.[2] The most important missionary was Eusebio Kino who led the evangelization of Pimería Alta.

Italo-Mexican identity rests on the common experience of migration from Italy in the late 19th century, a period characterized by a general Italian diaspora to the Americas. About 73,000 Italians emigrated to Mexico during this period,[3] and some returned to Italy or went on to the United States.[4] Most Italians who came to Mexico were farmers or farm workers from the northern Italian regions of Veneto, Trentino-Alto Adige/Südtirol, and Lombardy. Others, who arrived in the early 19th century, were from southern Italy. Many Italian settlers arriving in the late 19th and early 20th centuries received land grants from the Mexican government. When Benito Mussolini came to power, tens of thousands of Italian families left Italy for Mexico.

In the state of Aguascalientes there is a large population of Mexicans of Italian descent, the result of the French incursion and the creation of the Second Mexican Empire.[citation needed], while States like Guanajuato‘s large Italian population are due to both abandonment of agricultural Italian colonies in nearby states and later Italian immigration choosing the state as a destination. The regions with the greatest populations of Mexican Italians are Mexico City, Puebla, Morelos, Michoacán, Nuevo Leon, Baja California, Puebla, Aguascalientes, Guanajuato, and Veracruz. Veracruz has the largest Italian population along with Mexico City, mainly due to being the port of entry for immigrants. 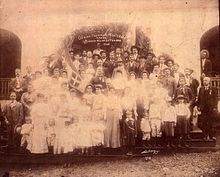 Italian community of Monterrey in 1905

Although Italo-Mexicans claim an Italian ethnic identity, they generally note that they are Mexican as well. In 1975, there were an estimated 130,000 Mexicans descended from Italian colonists, this number has grown dramatically to over 1,250,000 around Mexico and emigres to the US, just from the agricultural government sponsored colonies, while the Italian descendant population as a whole exceeds over 5 million Mexicans, making it one of the larger European ethnic groups in Mexico along with the larger Spanish, as well as German and French descendants.[5] Population figures are uncertain because, unlike other countries, Mexico's census does not gather information on specific ethnic groups. Most Italian Mexicans speak Spanish, but in Italian communities Italian and its related languages and dialects (usually mixed with Spanish) are used to communicate among themselves.[citation needed]

Playa del Carmen, Mahahual and Cancun in the state of Quintana Roo have also received a significant number of immigrants from Italy. Several families of Italian-Mexican descent were granted citizenship in the United States under the Bracero program to address a labor shortage of labor.

Italian companies have invested in Mexico, primarily in the tourism and hospitality industries. These ventures have sometimes resulted in settlements, but residents primarily live in the resort areas of the Riviera Maya, Baja California, Puerto Vallarta and Cancun. Although they generate employment, mainly in restaurants, hotels and entertainment centers, most employees have not become permanent residents of Mexico and live as ex-pats.

Most Italian immigration to Mexico occurred in the establishment of colonies. Dialects of Italian and languages of Italy which are still spoken include:

Claudio Linati is known for his lithographs depicting life in early independent Mexico.