The Italian colonists in Albania were Italians who, between the two world wars, moved to Albania to colonize the Balkan country for the Kingdom of Italy. Many of them promoted the union of Albania to Italy

Albania had held strategic importance for Italy since the Renaissance, when the Republic of Venice controlled some areas of the Albanian coast (called Albania Veneta). In addition, southern Italy contained Albanian-speaking communities (Arbëreshë people), who had taken refuge there from the Ottoman invasion of Albania during the Skanderbeg era, and who were favorable to a possible union of Albania and Italy.

At the end of the 19th century, Italian naval strategists eyed the port of Vlorë (Valona in Italian) and the island of Sazan (Saseno) at the entrance to the Bay of Vlorë. The port would give Italy control of the entrance to the Adriatic Sea.[1] Also, Albania could provide Italy with a beachhead in the Balkans. Before World War I Italy and Austria-Hungary had been instrumental in the creation of an independent Albanian state. At the outbreak of war in 1915, Italy seized the chance to occupy the southern half of Albania, to prevent the Austro-Hungarians from capturing. That success did not last long, as post-war domestic problems, defeat in the Vlora War, and pressure from US President Woodrow Wilson, forced Italy to pull out in 1920.[2] But Italy retained the island of Saseno, in front of Valona, that was annexed to the Province of Zara in Italian Dalmatia. 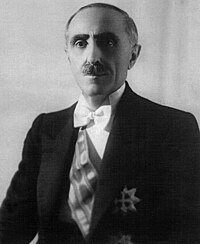 The Albanian prime minister Shefqet Verlaci, who approved the settlement of Italian colonists in 1940

When Benito Mussolini took power in Italy, he turned with renewed interest to Albania. Italy began penetrating Albania's economy in 1925, when Albania agreed to allow it to exploit its mineral resources.[3] That was followed by the First Treaty of Tirana in 1926 and the Second Treaty of Tirana in 1927, whereby Italy and Albania entered into a defensive alliance.[3] Italian loans subsidized the Albanian government and economy, and Italian military instructors trained the Albanian army. Italian colonial settlement was encouraged and the first 300 Italian colonists settled in Albania.[4]

Despite this strong Italian influence, King Zog of Albania refused to give in completely to Italian pressure.[5] In 1931, he openly stood up to the Italians by refusing to renew the 1926 Treaty of Tirana.

Fascist Italy increased pressure on Albania in the 1930s, and on April 7, 1939 invaded Albania,[6] five months before the start of the Second World War. The Albanian armed resistance proved ineffective and, after a short defense, Italy occupied the country. On 9 April 1939 Albanian King Zog fled to Greece,[7] and Albania ceased to exist as an independent country. The Balkan country became a component of the Italian Empire and was turned into an Italian puppet state. Albania was designed for eventual colonization and Italianization.

The throne was claimed by King Victor Emmanuel III of Italy,[7] who was the official ruler of Albania until his abdication on 25 July 1943. The country was led by Italian governors and an Albanian civil government.[7]

The puppet Albanian Fascist Party became the ruling party of the country and the local Fascists, like prime minister Shefqet Verlaci, allowed Italian citizens to settle in Albania and to own land so that they could gradually transform it into Italian soil. Verlaci (who had distant Italian roots) approved the possible administrative union of Albania and Italy, because he wanted Italian support for the union of Kosovo, Southern Epirus (Chameria), and other Albanian irredentist areas with the state of Albania, creating a Greater Albania. Indeed, this unification was partially realised after the Axis defeat of Yugoslavia and Greece in spring 1941 and the expansion of Albania into Macedonia, Kosovo, Novi Pazaar and Montenegro.

Italian citizens began to settle in Albania as colonists and to own land so that they could gradually transform it into Italian soil.[9]

The Italian colonists and the Italian "assimilation" were more or less welcomed in spring 1939, and were greeted by most Albanians when Albania was enlarged two years later. But in November 1941 they started to face contrary manifestations and the resistance of some Albanians, organized mainly by the Communist Party of Enver Hoxha.[10]

The process of colonization began in 1926 with 300 colonists.[11] The first Italians to colonise Albania were fishing families from Apulia, who moved to the island of Sazan opposite Vlora in 1918. The island was officially part of Italy from the end of World War I to 1947.

In 1926, the Italian government, in agreement with Albanian authorities, sent 300 Italian colonists to Kamez, near Tirana, to promote agricultural development.

Most of the Italians were farmers from Arberesh communities in southern Italy. They were initially successful, and created the company Ente industria agraria albanese with an agricultural school, but the regime of King Zog expelled them in 1931, fearing excessive Italian influence in Albanian society and politics.

After the occupation of Albania in April 1939, Mussolini sent nearly 11,000 Italian colonists to Albania. Most of them were from the Veneto region and Sicily. They settled primarily in the areas of Durazzo, Valona, Scutari, Porto Palermo, Elbasani and Santi Quaranta. They were the first settlers of a huge group of Italians to be moved to Albania.[12]

In addition to these colonists, 22,000 Italian casual laborers went to Albania in April 1940 to construct roads, railways and infrastructure.[8]

Most of the 1939 colonists were men enrolled in the so-called Albanian Militia. This organization was an Albanian fascist paramilitary group, part of the Blackshirts. Later even Albanians were recruited in the group. It was headquartered in Tirana and consisted of four legions in Tirana, Korçë, Vlorë and Shkodër. The Albanian Militia was disbanded in 1943 following the fall of Italy in World War II.[13]

No Italian colonists remain in Albania. The few who remained under the communist regime of Enver Hoxha escaped (with their descendants) to Italy in 1992,[14] and actually are represented by the association "ANCIFRA".[15]