The Italian War of 1551–1559, sometimes known as the Habsburg–Valois War and the Last Italian War, began when Henry II of France declared war against Holy Roman Emperor Charles V with the intent of recapturing Italy and ensuring French, rather than Habsburg, domination of European affairs. Historians have emphasized the importance of gunpowder technology, new styles of fortification to resist cannon fire, and the increased professionalization of the soldiers.[1] 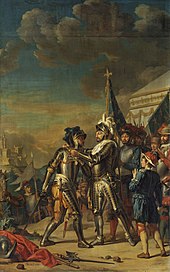 Henry II remitting the Order of Saint-Michel to Marshall de Tavannes after the Battle of Renty, on 13 August 1554

Henry II sealed a treaty with Suleiman the Magnificent in order to cooperate against the Habsburgs in the Mediterranean.[2] This was triggered by the conquest of Mahdiya by the Genoese Admiral Andrea Doria on 8 September 1550, for the account of Charles V. The alliance allowed Henry II to push for French conquests towards the Rhine, while a Franco-Ottoman fleet defended southern France.[3]

The 1551 Ottoman Siege of Tripoli was the first step of the all-out Italian War of 1551–59 in the European theater, and in the Mediterranean the French galleys of Marseille were ordered to join the Ottoman fleet.[4] In 1552, when Henry II attacked Charles V, the Ottomans sent 100 galleys to the Western Mediterranean,[5] which were accompanied by three French galleys under Gabriel de Luetz d'Aramon in their raids along the coast of Calabria in Southern Italy, capturing the city of Reggio.[6] In the Battle of Ponza in front of the island of Ponza, the fleet met with 40 galleys of Andrea Doria, and managed to vanquish the Genoese and capture seven galleys. This alliance would also lead to the combined Invasion of Corsica in 1553. The Ottomans continued harassing the Habsburg possessions with various operations in the Mediterranean, such as the Ottoman invasion of the Balearic islands in 1558, following a request by Henry II.[7]

On the Continental front, Henry II allied with German Protestant princes at the Treaty of Chambord in 1552. An early offensive into Lorraine, in the Second Schmalkadic War, was successful, with Henry capturing the three episcopal cities of Metz, Toul, and Verdun, and securing them by defeating the invading Habsburg army at the Battle of Renty in 1554. However, the French invasion of Tuscany in 1553, in support of Siena, attacked by an Imperial‐Florentine army, was defeated at the Battle of Marciano by Gian Giacomo Medici in 1554. Siena fell in 1555 and eventually became part of the Grand Duchy of Tuscany founded by Cosimo I de' Medici, Grand Duke of Tuscany.[8][page needed]

A treaty in Vaucelles was signed on 5 February 1556 between Charles V and Henry II of France.[9] After Emperor Charles' abdication in 1556 split the Habsburg empire between Philip II of Spain and Ferdinand I, the focus of the war shifted to Flanders. However, the truce was broken shortly afterwards. Pope Paul IV was displeased and urged Henry II to join the Papal States in an invasion of Spanish Naples. On 1 September 1556, Philip II responded by pre-emptively invading the Papal States with 12,000 men under the Duke of Alba, but French forces approaching from the north were defeated and forced to withdraw at Civitella in August 1557.[10] The Spanish attempted to blockade Rome by occupying the port of Ostia, but were driven back by the Papal armies in a surprise attack. However, when French troops were unable to come to their aid, the Papal armies were left exposed and were defeated, with Spanish troops arriving at the edge of Rome. Out of fear of another sack of Rome, Paul IV agreed to the Duke of Alba's demand for the Papal States to declare neutrality. Emperor Charles V criticized the peace agreement as being overly generous to the Pope.[11]

Philip, in conjunction with Emmanuel Philibert of Savoy, defeated the French at St. Quentin. England's entry into the war later that year led to the French capture of Calais, and French armies plundered Spanish possessions in the Low Countries. Nonetheless, Henry was forced to accept a peace agreement in which he renounced any further claims to Italy.[8][page needed]

The wars ended for other reasons, including "the Double Default of 1557", when the Spanish Empire, followed quickly by the French, defaulted on its debts. In addition, Henry II had to confront a growing Protestant movement at home, which he hoped to crush.[12]

Oman (1937) argues that the inconclusive campaigns which generally lack a decisive engagement were largely due to an effective leadership and lack of offensive spirit. He notes that mercenary troops were used too often and proved unreliable. Hale emphasizes the defensive strength of bastion forts newly designed at angles to dissipate cannon fire. Cavalry, which had traditionally used shock tactics to overawe the infantry, largely abandoned them and relied on pistol attacks by successive ranks of attackers. Hale notes the use of old-fashioned mass formations, which he attributes to lingering conservatism. Overall, Hale emphasizes new levels of tactical proficiency.[13]

In 1552 Charles V had borrowed over 4 million ducats, with the Metz campaign alone costing 2.5 million ducats. Shipments of treasure from the Indies totalled over two million ducats between 1552 and 1553. By 1554, the cash deficit for the year was calculated to be over 4.3 million ducats, even after all tax receipts for the six ensuing years had been pledged and the proceeds spent in advance. Credit at this point began costing the crown 43 percent interest (largely financed by the Fugger and Welser banking families). By 1557 the crown was refusing payment from the Indies since even this was required for payment of the war effort (used in the offensive and Spanish victory at the battle of St. Quentin in August 1557).[14]

French finances during the war were mainly financed by the increase in the taille tax, as well as indirect taxes like the gabelle and customs fees. The French monarchy also resorted to heavy borrowings during the war from financiers at rates of 10–16 percent interest.[15] The taille was estimated in collection for 1551 at around six million livres.[citation needed]

The Peace of Cateau-Cambrésis (1559) consisted of two treaties: the first one was signed between Elizabeth I of England and Henri II of France on April 2; the second one was signed between Henri II of France and Philip II of Spain on April 3.[16] The two treaties also defined the conclusion of the Imperial-French wars, and therefore the end of the Habsburg-Valois conflict as a whole, with the approval of Ferdinand I, Holy Roman Emperor.[a][b] The four monarchs did not meet in person; they were represented by ambassadors and delegations.[20] Some Italian states also attended the conference.[21]

The peace was facilitated by the abdication of Charles V in 1556 and the division of the Habsburg empire between Spain and Austria: Philip II of Spain received the kingdoms of Spain, southern Italy (Naples, Sicily, and Sardinia) and the colonies in the Americas; and Ferdinand of Austria became ruler of the Holy Roman Empire extending from Germany to northern Italy, with suo jure control of the Danube monarchy. The Duchy of Milan and the Habsburg Netherlands were left in personal union to the King of Spain while continuing to be part of the Holy Roman Empire. With the end of the personal union of the Holy Roman Empire and Spain ("Habsburg encirclement"), France was open to peace talks. A truce was reached in Vaucelles around 1556, but it was broken shortly after. The condition of economic and religious turmoil in which the war resumed forced the parties to make peace in 1559.[22]

By the terms of the treaties, France ended military operations in the Spanish Netherlands and the Imperial fiefs of northern Italy bringing an end to most of the French occupation in Corsica, Tuscany and Piedmont. England and the Habsburgs, in exchange, ended their opposition to French occupation of the Pale of Calais, the Three Bishoprics, and a number of fortresses. For Spain, despite no new gains and the restoration of some occupied territories to France, the peace was a positive result as it confirmed its control of the Habsburg Netherlands, the Duchy of Milan, and southern Italy (Sardinia, Naples, Sicily). Ferdinand I left the Three Bishoprics under French occupation, but the Netherlands and most of northern Italy remained part of the Holy Roman Empire in the form of imperial fiefs. Furthermore, his position of Holy Roman Emperor was recognized by the Pope who had refused to do so as long as the war between France and the Habsburgs continued. England fared poorly during the war, and the loss of its last stronghold on the continent damaged its reputation.[23]

At the end of the conflict, Italy was therefore divided between viceroyalties of the Spanish Habsburgs in the south and formal fiefs of the Austrian Habsburgs in the north. The imperial states were ruled by the Medici in Tuscany, the Spanish Habsburgs in Milan, the Estensi in Modena, and an Italianized House of Savoy in Piedmont.[24] The southern Kingdoms of Naples, Sicily and Sardinia were under direct rule of the Spanish Habsburgs. This situation continued until the European wars of succession of the 18th century, when northern Italy passed to the Austrian house of Habsburg-Lorraine and the south passed to the Spanish Bourbons.[25] The Papacy in central Italy maintained major cultural and political influence during the Catholic Reformation initiated by the conclusion of the Tridentine council (resumed by the terms of the treaty).[26] 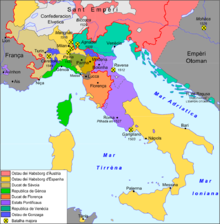 Map of Italy in 1559 after the Treaties of Cateau-Cambrésis

According to the treaties signed in Le Cateau-Cambrésis:

Emmanuel Philibert, Duke of Savoy married Margaret of France, Duchess of Berry, the sister of Henry II of France. Philip II of Spain married Elisabeth, the daughter of Henry II of France.[33] Henry died during a tournament when a sliver from the shattered lance of Gabriel Montgomery, captain of the Scottish Guard at the French Court, pierced his eye and entered his brain. The death of Henry II caused his 15-year-old son Francis II to take the throne, beginning a period of political instability that ultimately led to the French Wars of Religion.