The Italian Navy (Italian: Marina Militare, lit. 'Military Navy'; abbreviated as MM) is the Navy of the Italian Republic. It is one of the four branches of Italian Armed Forces and was formed in 1946 from what remained of the Regia Marina (Royal Navy) after World War II. As of August 2014[update], the Italian Navy had a strength of 30,923 active personnel, with approximately 184 vessels in service, including minor auxiliary vessels. It is considered a multiregional and a blue-water navy.[2][3][4]

Before and during World War II

The Regia Marina was formed on 17 March 1861, after the proclamation of the Kingdom of Italy.[5] The Italian Navy assumed its present name after the Italian monarchy was abolished following a popular referendum held on 2 June 1946.

At the end of its five years involvement in World War II, Italy was a devastated nation. After the end of hostilities, the Regia Marina – which at the beginning of the war was the fourth largest navy in the world, with a mix of modernised and new battleships – started a long and complex rebuilding process. The important combat contributions of the Italian naval forces after the signing of the armistice with the Allies on 8 September 1943, and the subsequent cooperation agreement on 23 September 1943, left the Regia Marina in a poor condition, with much of its infrastructure and bases unusable and its ports mined and blocked by sunken ships. However, a large number of its naval units had survived the war, albeit in a low efficiency state, which was due to the conflict and the age of many vessels. The vessels that remained were:

The peace treaty signed on 10 February 1947 in Paris was onerous for Regia Marina. Apart from territorial and material losses, also the following restrictions were imposed:

Aircraft carrier Aquila just before being scrapped in La Spezia, 1951

The entry into NATO

Great changes in the international political situation, which were developing into the Cold War, convinced the United Kingdom and United States to discontinue the transfer of Italy's capital ships as war reparations. Some had already been dismantled in La Spezia between 1948 and 1955, including the aircraft carrier Aquila. However, the Soviet Union demanded the surrender of the battleship Giulio Cesare and other naval units designated for transfer. The cruisers Attilio Regolo and Scipione Africano became the French Chateaurenault and Guichen, while Eugenio di Savoia became the Greek Elli. After break up and/or transfers, only a small part of the fleet remained to be recommissioned into the Marina. As Western attention turned to the Soviets and the Mediterranean Sea, Italian seas became one of the main sites of confrontation between the two superpowers, contributing to the re-emergence of Italy's naval importance thanks to her strategic geographical position.

With the new elections in 1946, the Kingdom of Italy became a republic, and the Regia Marina took the name of Marina Militare (lit. 'Military Navy'). As the Marshall Plan began to rebuild Italy and Europe was rapidly being divided into two geopolitically antagonistic blocs, Italy began talks with the United States to guarantee adequate security considerations. The US government in Washington wished to keep its own installations on the Italian Peninsula and relaxed the Treaty restrictions by including Italy in the Mutual Defense Assistance Programme (MDAP). On 4 April 1949, Italy joined the North Atlantic Treaty Organisation (NATO) and, in order for the navy to contribute actively in the organization, the Treaty restrictions were definitively repealed by the end of 1951, with the consent of all of Western nations. 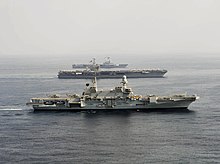 The carrier Cavour in the Gulf of Oman, 2013

Within NATO, the Italian Navy was assigned combat control of the Adriatic Sea and Strait of Otranto, as well as the defence of the naval routes through the Tyrrhenian Sea. To ensure these tasks a Studio sul potenziamento della Marina italiana in relazione al Patto Atlantico (Study on the development of the Italian Navy with reference to the Atlantic Pact) was undertaken, which researched the structures and the methods for the development of the navy.

The coat of arms is surmounted by a golden crown, which distinguishes military vessels from those of the merchant navy.

The crown, corona rostrata, was proposed in 1939 as a conjectural link to the Roman navy by Admiral Domenico Cavagnari, then a member of the Chamber of Fasces and Corporations in the Fascist government. In the proposal, Adm. Cavagnari wrote that "in order to recall the common origin [of the Navy] from the Roman mariners, the Insignia will be surmounted by the towered Crown with rostra, the emblem of honour and valour the Roman Senate awarded to the leaders of naval victories, conquerors of lands and cities across the seas".

A further difference is that St. Mark's lion, symbolising the Republic of Venice, does not hold the gospel in its paw (as it does on the civil ensign, where the book is open at the words "Pax tibi Marce, evangelista meus", meaning "peace to you, Mark, my evangelist") and is wielding a sword instead: such an image is consistent with the pictorial tradition from Venetian history, in which the book is shown open during peacetime and closed during wartime.

The Corps of the Port Captaincies – Coast Guard (Corpo delle Capitanerie di porto – Guardia costiera) is the coast guard of Italy and is part of the Italian Navy under the control of the Ministry of Infrastructures and Transports. In Italy, it is commonly known as simply the Guardia costiera. The Coast Guard has approximately 11 000 staff. [15]

The Italian Navy is divided into seven corps (by precedence) and one:

Command of the Italian Fleet (ships, submarines and amphibious forces) and Naval aviation[16] falls under Commander in Chief Naval Fleet

Today's Italian Navy is a modern navy with ships of every type. The fleet is in continuous evolution, and as of today oceangoing fleet units include: 2 light aircraft carriers, 3 amphibious assault ships, 4 destroyers, 13 frigates and 8 attack submarines. Patrol and littoral warfare units include: 10 offshore patrol vessels. 10 mine countermeasure vessels, four coastal patrol boats, and a varied fleet of auxiliary ships are also in service.[17]

The flagship of the fleet is the carrier Cavour.

The Italian Navy operates a diverse fleet of aircraft including fixed-wing, rotary and UAVs.

For the Naval Aviation the Navy plans to expand for replace the following assets:[20]

For the San Marco Marine Brigade, the Navy plans to acquire following assets:[20]